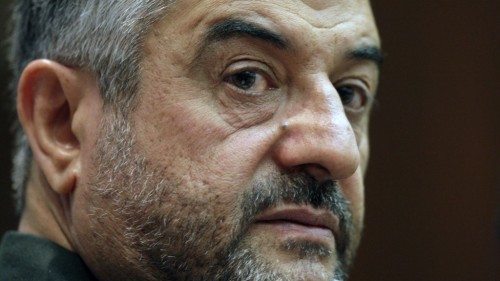 The head of Iran’s Revolutionary Guards issued another public challenge to President Rouhani in a press conference on Tuesday.

Using the Supreme Leader’s statements denouncing America, Jafari again criticized the Government’s approach of “engagement”, including of Western countries, before and after the July 14 nuclear deal:

The source of concern after the agreement is not so much the military or security threat, but the belief of some who think the enmity of the United States against us has come to an end or has decreased.

The enmity of Global Arrogance [West] has not decreased against us. Its instruments have changed towards soft war and we must be vigilant. As the Supreme Leader has emphasized, it is the duty of the officials to bluntly declare their revolutionary position.

The Government has played down expanded links with the US, but has hosted a series of high-profile European officials and business delegations in the hope for trade and investment to revive the Iranian economy. The initiatives could compete with the Revolutionary Guards’ extensive holdings, including shares in top Iranian companies and major projects in energy, transportation, and other infrastructure.

Jafari continued his verbal assault, without naming Rouhani or his officials:

Unfortunately, one of the interpretations of the post-negotiations era is that we have removed the evil clouds of war from the country and the people, through negotiations and agreement or that negotiations and conversation with the enemy have guaranteed the security of the Islamic Republic.

Such interpretations may indicate that self-sacrifice and the courage of the Iranian nation are not the true sources of power of the Islamic Republic of Iran.

Then he turned to the domestic front, warning the President not to pursue a political and cultural opening in Iran, including the release of political prisoners. He specifically rejected Rouhani’s proposal to remove the power of the Guardian Council to vet and disqualify candidates for elections, ahead of votes in February for Parliament and the Assembly of Experts:

The enemies always have plans for the elections, which for the most part revolve around the political parties and currents. We must therefore be vigilant that the political currents and political parties which have a past record of opposition to the revolution and its path, should not present themselves under new names….

The insight of the people has increased after the sedition of 2009 [the mass protests after the dispute Presidential election, however. We have no serious concern, but we are vigilant.

The general also reassured journalists that Iran would maintain its military support to the Syrian regime, essential to the survival of President Assad:

It is our duty to provide decisive and comprehensive support as far as possible to the Syrian resistance.

The Islamic Republic of Iran, especially the IRGC [Islamic Revolutionary Guards Corps], has prepared with all of its abilities and has plans to deal with proxy wars and confront the opponents of the “resistance front”. In addition to experience-sharing and advisory support, we support any kind of request of us who are in the IRGC and the armed forces; these programs will continue until the final defeat of the enemy.

Rafsanjani told Zarif, “You should not lose heart because of the extremism of a minority….The people are with you and they are happy.”

Mousavi, who “lost” to Mahmoud Ahmadinejad in the disputed 2009 Presidential election, and fellow candidate Karroubi were detained in February 2011 amid regime fears of renewed mass protests. The house arrest was also imposed on Mousavi’s wife Zahra Rahnavard, a prominent artist, academic, and activist.

President Rouhani said last weekend that the Government has no power to intervene over the cases.

Pourmohammadi supported that line yesterday, saying the detentions are a security issue — “The issue of house arrest is not a legal case because it is a decision taken after political unrest” — and the Supreme National Security Council should make any decisions. 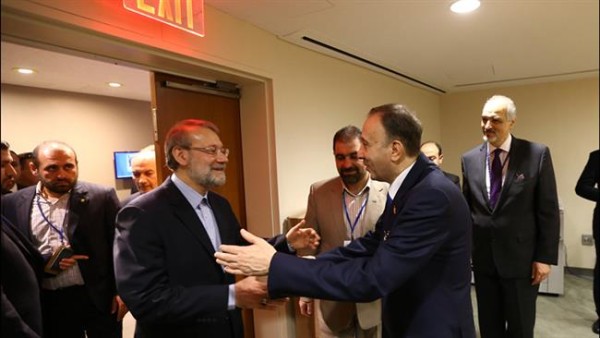 The two men are attending the 4th World Conference of Parliament Speakers at the UN.

According to State outlet Press TV, al-Laham said “the resistance movement will emerge victorious because it is based on ethical principles”.

Larijani reportedly said, “The Islamic Republic of Iran feels duty-bound to back the Syrian government and nation until the ground is prepared for dialog and peace in Syria.”

Head of Assembly of Experts Supports Warnings to Rouhani

Addressing the semi-annual meeting of the Assembly of Experts, its head Mohammad Yazdi has reinforced the warnings to President Rouhani over the challenge to other elements in the regime.

Yazdi said of Rouhani’s proposal to curb the power of the Guardian Council to vet and disqualify election candidates, “that the the Council’s powers are “approbation” — approval and enforcement — rather than “ceremonial” He added, “This supervision is done from the moment of registration until the announcement of results.”

The Assembly head also confronted the Government over the July 14 nuclear deal, saying it must be reviewed and approved by Parliament: “This misgiving that has been stated — that there is no need to sign it and approve it in Parliament — is unclear.”

The Government has said that Parliament can offer an advisory opinion, but that approval rests with the Supreme National Security Council.

And Yazdi joined critics who have confronted Rouhani’s foreign policy of “engagement”, denouncing any easing of relations with the US: “Just as the Supreme Leader stipulated, we must be vigilant that this agreement does not change our foreign policy….The nuclear talks have nothing to do with bilateral relations.”

The 88-member Assembly has the power to name the Supreme Leader and nominally can replace him. Rouhani was at Tuesday’s session, and Ayatollah Khamenei is scheduled to address the group on Wednesday.

In a possible step back from a confrontation — or sign of division within the Government — Interior Minister Abdolreza Rahmani
Fazli said his Ministry is in “complete harmony” with the Guardian Council. He also said the Council’s authority was one of “approbation” and interpretation of the Constitution.

Fazli stressed “government noninterference” in elections and dismissed any claims that the government has supported a particular person or faction.