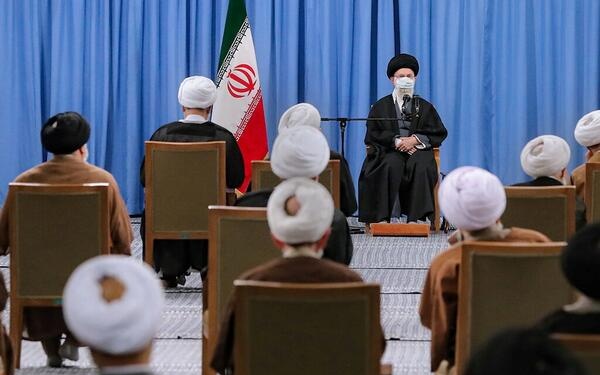 As Iran limits inspections of its nuclear facilities, the Supreme Leader proclaims that Tehran may escalate enrichment of uranium from 20% grade to 60%.

Ayatollah Khamenei gave no explanation for the 60% figure, which is still short of military-grade 90% for a nuclear weapon. Instead, he proclaimed that — with the US and the European Union proposing discussions on a revision of the 2015 agreement between Iran and the 5+1 Powers — that “the Islamic Republic will not back down on the nuclear issue and will strongly continue down the path of what the country requires for today and tomorrow”.

Iran is not after nuclear weapons, but its nuclear enrichment will not be limited to 20% either. It will enrich uranium to any extent that is necessary for the country. Iran's enrichment level may reach 60% to meet the country's needs.

He assured, “We are not after nuclear weapons,” but snapped at Israeli Prime Minister Benjamin Netanyahu — “that international Zionist clown” — “If we had any such intention, even those more powerful than him wouldn’t be able to stop us.”

Iran confirmed on Monday, after a visit by International Atomic Energy Agency head Rafael Grossi, that it is leaving the Additional Protocol to the Nuclear Non-Proliferation Treaty. The step will restrict IAEA “snap” inspections. While video monitoring of nuclear facilities continues, Iranian officials will keep the tapes.

See also Iran to Proceed with Limits on Nuclear Inspections

Responding to Khamenei’s posturing, a US State Department spokesman said the vow of 60% enrichment sounded “like a threat” but added that the Biden Administration will not respond to hypotheticals.

White House Press Secretary Jen Psaki said the European Union is still awaiting a response from Iran to the invitation for an informal meeting with the US and the current members of the 2015 agreement (UK, France, Germany, China, and Russia).

In a virtual address to a UN-sponsored conference on disarmament, Secretary of State Antony Blinken maintained a firm line that any talks, following the Trump Administration’s withdrawal from the nuclear deal in May 2018, must include revisions: “Working with allies and partners, we will also seek to lengthen and strengthen the JCPOA [Joint Comprehensive Plan of Action] and address other areas of concern, including Iran’s destabilizing regional behavior and ballistic-missile development and proliferation.”

German Foreign Minister Heiko Maas also called for an Iranian return to compliance with the deal: “It is in Iran’s best interest to change course now, before the agreement is damaged beyond repair.”

He added that Berlin expects “full compliance, full transparency, and full cooperation” from Iran with the IAEA.

US, Iran, and the Nuclear Deal — The “You Go First” Dilemma