UPDATED: US, Iran, and the Nuclear Deal — The “You Go First” Dilemma 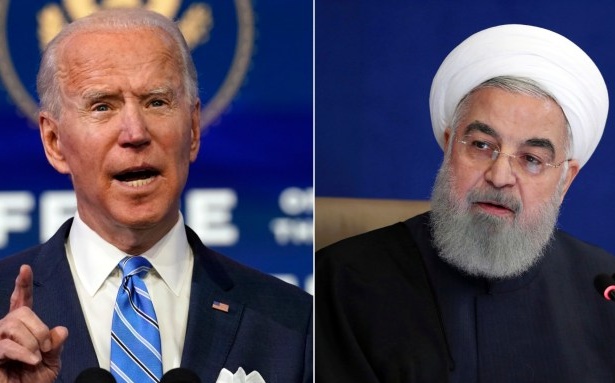 US Secretary of State Antony Blinken and Iran’s Ambassador to the UN, Majid Takht Ravanchi, have each proclaimed “You Go First” as the public gap between Washington and Tehran persists over the 2015 nuclear deal.

Making his first public comments since his confirmation in post by the Senate, Blinken said “that if Iran comes back into full compliance with its obligations under the JCPOA, the United States would do the same thing”. He continued:

Iran is out of compliance on a number of fronts and it would take some time, should it make the decision to do so, for it to come back into compliance and time for us then to assess whether it was meeting its obligations.

We are not there yet, to say the least.

The United States must immediately adhere to its commitments in the nuclear agreement….The new administration should also swiftly remove the new sanctions that the Trump administration placed on Iran….

Any halfhearted or partial fulfillment of the United States commitments will undermine what Mr. Biden has promised. But it will also be interpreted as insincerity on the part of the new administration.

Blinken also alluded to the call by Washington and the three European signatories — the UK, France, and Germany — for the deal to be revised, speaking of a “longer and stronger agreement” that would deal with other “deeply problematic” issues.

ORIGINAL ENTRY, JAN 22: Iran’s President Hassan Rouhani says the US can return “within an hour” to the 2015 nuclear deal, between Tehran and the 5+1 Powers (US, UK, France, Germany, Russia, and China).

The Biden Administration says it will negotiate re-entry into the Joint Comprehensive Plan of Action, from which Donald Trump withdrew in May 2018.

So what is the problem?

Welcome to the “You First” dilemma.

Majid Takht Ravanchi, Iran’s Ambassador to the UN, said on Tuesday to the new American Government, “You first.”

Our position is clear: the US must completely lift sanctions….We don’t want anything more or less than that.

But the new US Secretary of State Antony Blinken said on the same day to the Islamic Republic, “You first”.

[We] have to evaluate whether they were actually making good if they say they are coming back into compliance with their obligations [under the JCPOA], and then we would take it from there.

It only took Trump a moment to shred US involvement in the nuclear deal. It will take far longer, and with much more diplomatic finesse, to return to the position of July 2015.

Each side has built layers that have to be removed one by one.

On the American side, it is not just the comprehensive sanctions imposed in November 2018 but each subsequent blacklisting of Iranian companies, individuals, and foreign entities doing business with them.

On the Iranian side, it is each step suspending a provision of the JCPOA: exceeding the limits on 3.67% uranium, installing advanced centrifuges, and this month returning to enrichment of 20% uranium and producing uranium metal.

The layers are not permanent but not a single one will be lifted while the exchange between Washington and Tehran is “You First”.

The Gap Over New Talks

Then there is the wide division between a return to the 2015 deal and a renegotiation of it.

Even before considering the hawks in Washington who oppose any agreement, the Biden Administration has no inclination simply to return the clock to January 2017, before Donald Trump replaced Barack Obama.

And it’s not just the Biden team that are insisting on an update. The three European powers — the UK, France, and Germany — have been leading the call for renegotiation while seeking a US return to the table.

French President Emmanuel Macron has said since November 2017 that a deal must cover missile development and production: “It should be completed with necessary points.”

German Chancellor Angela Merkel appealed in May 2018 for an “expansion of the negotiating framework”.

But publicly Iranian officials, beginning with the Supreme Leader, are ruling out revisions. Ambassador Takht Ravanchi said on Tuesday, “We will neither allow the JCPOA to be renegotiated nor will we allow anything to be added to it.”

Is there no way back to the deal?

Seen through public positions, the answer appears to be No.

But it is useful to remember that the path to the JCPOA did not begin in public. Instead, back-channel discussions were held in 2012 in Oman, reportedly including the Supreme Leader’s top aide Ali Akbar Velayati and US officials including Jake Sullivan.

But the private contacts continued, and after new President Hassan Rouhani told the Supreme Leader in September 2013 of the extent of Iran’s economic difficulties, Khamenei changed course. Days later, he signalled that formal talks could begin with a speech to the Revolutionary Guards about “heroic flexibility“.

On Monday, Iranian Foreign Minister Mohammad Javad Zarif offered the first signal of “flexbility” in 2021. He told CNN’s Christiane Amanpour that the European Union’s head of foreign policy, Josep Borrell, could “choreograph” the way out of the “You Go First” dilemma between Iranian compliance and US sanctions.

Zarif explained, “There can be a mechanism to basically either synchronize it or coordinate what can be done.”

Anyone who expects a quick US re-entry to nuclear deal will be disappointed. Except for those who are involved, we are unlikely to know of the contacts between the Biden officials, best seen as pragmatists seeking a way out of confrontation, and Iranian counterparts. The back-channel talks will not be enough for a resolution lifting US sanctions and returning Iran to 3.67% uranium.

However, as in 2012-2013, they may lay the foundation for more signals of “choreography” reviving the EU as the host for Iran-US talks. That could be enough to check further steps weakening the JCPOA — and a reality contrasting with the Supreme Leader’s current position that engagement with the Americans is “fruitless”.