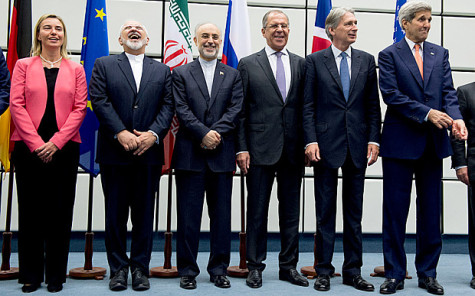 Ministers from Iran, the 5+1 Powers, and the European Union mark signature of nuclear deal, July 2015

Iran’s Deputy Foreign Minister Abbas Araqchi said on Saturday that Tehran is studying the European Union invitiation for an informal meeting between the US, the Islamic Republic, and the current participants (UK, France, Germany, Russia, and China) in the Julky 2015 nuclear deal.

Speaking on State TV, Araqchi said the Rouhani Government has not yet replied to the EU:

We are studying [EU foreign policy head] Josep Borrell’s proposal to hold an informal meeting of the 4+1 with the United States and Iran, and we are consulting with our partners, including Russia and China, and we will respond to this proposal in the future.

He put out Iran’s “You Go First” insistence to the Biden Administration: “However, we believe a US return to the nuclear accord does not require a meeting and the only way for it is to lift [American] sanctions.”

The Biden Administration, which wants an Iranian return to compliance with the agreement, repeated on Friday that it will not take any steps before an informal discussion.

#Iran's Deputy FM Araghchi: The body of evidence shows that #Biden team has not been able to reach a conclusion & an alternative policy on the #JCPOA… They do not seem to have been able to overcome their internal challenges and reach a single united policy on the #nuclear deal. pic.twitter.com/CtDmxeotpC

ORIGINAL ENTRY, FEB 19: The Biden Administration is ready to enter talks with Iran about American re-entry to the 2015 nuclear deal between Tehran and the 5+1 Powers (US, UK, France, Germany, China, and Russia).

A “senior US official” confirmed on Thursday that Washington is prepared for the discussions if the European Union extends an invitation: ““We are ready to show up if such a meeting were to take place.”

The message followed a virtual meeting between US Secretary of State Antony Blinken and UK, French, and German Foreign Ministers. A senior EU official said before the conversation that the bloc is prepared to convene a gathering of Iran and all 5+1 Powers, including the Americans.

The #JCPOA at a critical moment. Intense talks with all participants and the US. I am ready to invite them to an informal meeting to discuss the way forward.

The Trump Administration withdrew from the Joint Comprehensive Plan of Action in May 2018. Six months later, it imposed comprehensive sanctions on Tehran.

Since President Joe Biden took office on January 20, the US and Iran have been in a “You Go First” dance. The Islamic Republic is insisting on the lifting of the sanctions. American officials are demanding that Iran cease its suspensions of the deal’s provisions, including Iran’s return last month to the pre-2015 enrichment of 20% uranium.

But on Wednesday, while maintaining a defiant note, Iran’s Supreme Leader indicated that he could accept an arrangement of linked steps: “If we see action on the part of the other side, we will take action too.”

Supreme Leader: “If US Takes Action, We Will Take Action” on Iran Nuclear Deal

Foreign Minister Mohammad Javad Zarif followed up on Twitter on Friday morning: “US unconditionally & effectively lift all sanctions imposed, re-imposed or re-labeled by Trump. We will then immediately reverse all remedial measures.”

Signals from Both Sides

In another signal to Iran, Acting US Ambassador Richard Mills told the UN Security Council that the Biden Administration is rescinding an assertion from last September that all UN sanctions have been reimposed on Iran.

Then Secretary of State Mike Pompeo declared the “snapback” sanctions. He was immediately rebuked by all but one member of the Security Council, including US allies such as the UK, France, and Germany.

In his own signal, Iran President Hassan Rouhani told European Council President Charles Michel that the EU “can play a role in designing the steps” for a return to commitments by both Washington and Tehran.

According to Rouhani’s office, Michel responded that the EU will use the opportunity to “preserve and fully implement” the accord.