Iran to Proceed with Limits on Nuclear Inspections 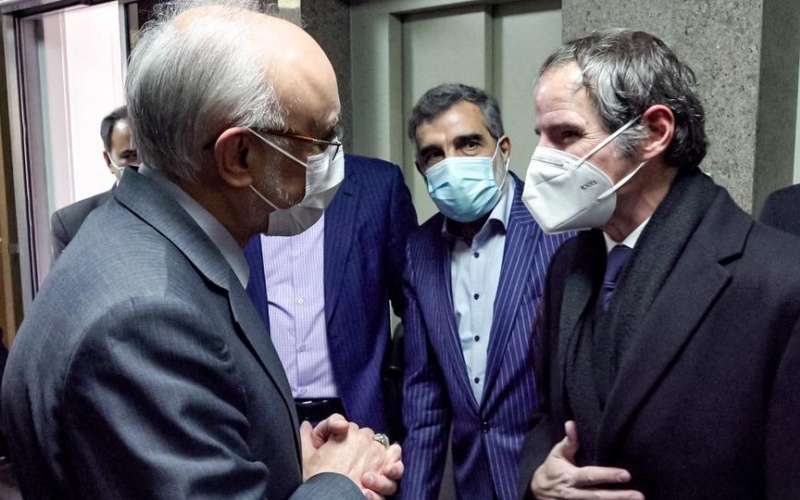 Iran will proceed with limits on “snap” inspections of its nuclear programs.

After a Sunday meeting in Tehran with the head of the International Atomic Energy Agency, Tehran cushioned the step with a joint declaration that there will be “necessary” monitoring for up to three months.

However, officials immediately added that the IAEA will not be given access to the surveillance videos.

#Iran's AEOI, in a statement, said Iran will keep the monitoring equipment information (camera footages) for 3 months without giving IAEA access to tapes. It says if sanctions are fully terminated in 3 months, Iran will give them to the agency unless they will be deleted for good

The Rouhani Government is maneuvering between Parliamentary demands and the likely criticism from much of the international community if it terminated all IAEA inspections.

In December, the Iranian Parliament pushed through legislation, over the public objection of President Hassan Rouhani, commanding steps within two months if the Biden Administration did not lift US sanctions. They included a return to the level of 20% enriched uranium, produced before the July 2015 agreement between Iran and the 5+1 Powers (US, UK, Germany, France, China, and Russia), and the end of inspections under the Additional Protocol to the Nuclear Non-Proliferation Treaty.

Last month the Government resumed the production of 20% uranium, which can potentially be further enhanced to military-grade 90%.

In late January, Iran said it would halt “snap” inspections under the Additional Protocol, to which Tehran acceded at the time of the nuclear deal.

However, the Biden Administration shifted the dynamic last week when it confirmed its readiness for discussions with Iran and the other 5+1 Powers, and a return to the agreement from which the Trump Administration withdrew in May 2018. At the same time, the Administration rejected Iran’s precondition of sanctions removal.

At an airport news conference before leaving Tehran, IAEA Rafael Grossi conceded defeat over the snap inspections: “This law exists. This law is going to be applied, which means that the Additional Protocol, much to my regret, is going to be suspended.

The joint statement with the Rouhani Government said the Islamic Republic will continue implementation of the Comprehensive Safeguards Agreement, which allows monitoring of declared nuclear facilities.

The IAEA will continue “necessary verification and monitoring activities for up to three months”, but the statement did not specify the activities.

@IAEAOrg DG:
1. #Iran will continue to implement comprehensive safeguards agreement.
2. We reached a temporary, bilateral, technical understanding whereby IAEA will continue its verification & monitoring for up to 3 months.
3. We'll keep the understanding under review constantly. pic.twitter.com/QFgMBuznZz

Grossi said Iran’s measures against inspections will be “to a certain extent mitigated” by the “temporary technical understanding”: “There is less access, let’s face it. But still we were able to retain the necessary degree of monitoring and verification work.”

He then deferred to the possibility of discussions among the US, Iran, and the other 5+1 Powers.

What we agreed is something that is viable, it’s useful to bridge this gap that we are having, salvages the situation now. But of course for a stable, sustainable situation there will have to be a political negotiation that is not up to me.

Zarif: “This is Not An Ultimatum”

Iranian Foreign Minister Mohammad Javad Zarif tried to pre-empt international condemnation of the limits of inspections with the declaration that his hands, and those of the Government, were tied:

This is not a deadline for the world. This is not an ultimatum. This is an internal domestic issue between the Parliament and the Government.

We are supposed to implement the laws of the country. And the parliament adopted legislation — whether we like it or not.

US National Security Jake Sullivan pressed the line that the Biden Administration’s reception of the European Union invitation for discussions and “hard-headed, clear-eyed diplomacy” meant “the script has been flipped” on Iran.

“It is Iran that is isolated now diplomatically, not the United States,” Sullivan asserted. “And the ball is in their court.”

Iranian Deputy Foreign Minister Abbas Araqchi said on Saturday that the EU invitation is still being considered, and Sullivan confirmed that Tehran “has not yet responded”: “That offer still stands because we believe diplomacy is the best way to do it.”

Araqchi restated the precondition that Washington must lift the comprehensive sanctions, imposed by the Trump Administration in November 2018.

National Security Advisor Sullivan also said, “We have begun to communicate with the Iranians” over the detention of Americans in the Islamic Republic.

Deriding the “complete and utter outrage” and “humanitarian catastrophe”, Sullivan said, “We will not accept a long-term proposition where they continue to hold Americans in an unjust and unlawful manner.”

#Iran's Foreign Ministry spokesman @SKhatibzadeh reacted to the remarks by US NSA @JakeSullivan46, saying "the news is not true as stated and there are no direct talks between Iran and the United States in any field…Our priority is the release of Iranian prisoners in the US". pic.twitter.com/HLRPV42uLf

However, another official implied that the communication is coming via Switzerland, which has represented Washington in Tehran since US-Iran diplomatic relations were broken in 1979.

Iran’s government has not discussed American prisoners with Washington. All messages have been exchanged through the Swiss embassy in Tehran.

Dual Iranian-Americans held in Iran include:

*Businessman Emad Sharghi, rearrested in November 2020 and sentenced to 10 years in January

The Revolutionary Guards has regularly seized dual and foreign nationals, using them for political leverage.

In January 2016, when the nuclear agreement was formally implemented, four US citizens were freed, including Washington Post correspondent Jason Rezaian.