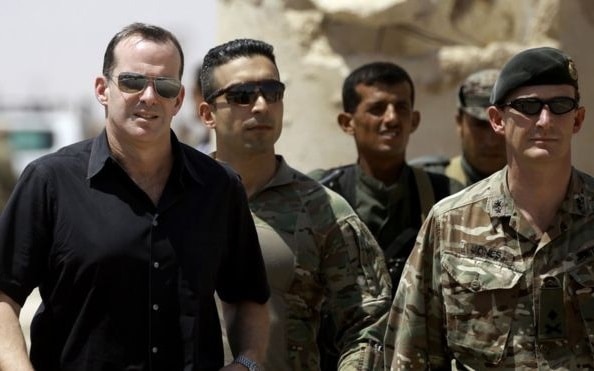 President-elect Joe Biden has appointed Brett McGurk, the former US envoy in the campaign against the Islamic State, as Middle East coordinator on the National Security Council.

The nomination of McGurk, who has served under successive Democratic and Republican administrations, is likely to antagonize the Turkish Government of President Recep Tayyip Erdoğan. McGurk has frequently criticized Ankara over its involvement in Syria and is seen as a staunch backer of the Kurdish autonomous administration in the northeast of the country.

The US military backs the Kurdish-led Syrian Democratic Forces, which expelled ISIS from the area between 2017 and 2019. But Turkey consider the YPG militia, the leading element in the SDF, as part of the Turkish Kurdish insurgency PKK.

McGurk quit as US envoy in December 2018, protesting Donald Trump’s announcement that he would withdraw all American troops from northern Syria.

Trump’s declaration followed a phone call in October 2018 with Erdoğan. The Pentagon has maintained about 1,000 personnel in northern Syria, including about 500 alongside the SDF.

However, Trump’s subsequent announcement of a withdrawal in October 2019 — again after a call with Erdoğan — was seen as a green light for Turkey’s cross-border operation to take a corridor along the border, extending east across the Euphrates River to the Iraq frontier.

I’ve had the privilege of serving with President-elect Joe Biden over the last decade. He’s the leader we need at this critical moment in history. I’ll be honored to join his NSC team under the leadership of @jakejsullivan. 12 days! pic.twitter.com/hLDFWLK1PO

In 2017, Turkish Foreign Minister Mevlüt Çavuşoğlu said, “Brett McGurk, the USA’s special envoy in the fight against Daesh [IS], is definitely and clearly giving support to the PKK and YPG. It would be beneficial if this person is changed.”

The tension has not eased since McGurk’s departure from the Trump Administration, with the former envoy stepping up his criticism of the Turkish Government, including on social media.

The US just ratified Turkey’s plan to effectively extend its border 30km into Syria with no ability to meaningfully influence facts on the ground. Turkey says it’s the entire border from the Euphrates to Iraq (450x30km) to be controlled by its military forces. Non-implementable.

McGurk even suggested that Erdoğan may have sheltered ISIS leader Abu Bakr al-Baghdadi, killed in a US raid in northern Syria on October 26, 2019.

15 quick questions Trump may want to ask Erdogan, but won’t:

1. How exactly was Baghdadi living in a safe house with well-prepared tunnels less than 5km from your border?

2. Why was Baghdadi’s number two found in Jarabulus, a small town on your border that you fully control?

The former envoy also wrote, after the Turkish President denounced Israeli treatment of Palestinians, “Erdoğan called on Muslims to ‘unite against the west’ at the very moment Turkey is hosting US-designated-terrorist Ismail Haniyeh of Hamas in Istanbul.”

Beyond doubt, McGurk has harmed Turkish-American relations. He no longer has much room in northern Syria to support the YPG. But his attitude towards other issues in the region from Libya to Iraq remains to be seen.

McGurk’s role as Middle East director on the NSC may soon bring conflict with Turkey in areas beyond Syria. When Israel normalized relations with the UAE and Bahrain, with Saudi support, McGurk suggested that the evolving links were spurred by Ankara’s challenge.

When the UAE normalised relations with Israel earlier this year, McGurk welcomed the agreement and suggested that the two countries’ common animosity towards Turkey helped bring them together. He linked the tweet to an article from a right-wing UK newspaper claiming the Erdoğan Government’s support for “Hamas operatives planning terror attacks against the West”.

Among the key drivers for the historic normalization between #UAE and #Israel: Turkey’s regional policies, long viewed as increasingly threatening in both Jerusalem and Abu Dhabi. https://t.co/ls8tL1ALIe

Turkish-US relations have been strained since the final years of the Obama Administration, with Erdoğan claiming US support for the failed coup against him in July 2016.

Earlier this month Washington imposed sanctions against Ankara over its purchase of advanced S-400 anti-aircraft missile systems from Russia. The Congressional action was also prompted by criticism of Turkey’s operations in the Kurdish areas of northern Syria.

In early 2018, Turkey and anti-Assad fighters occupied most of the Kurdish canton of Afrin in northwest Syria.

In recent weeks, the center of conflict has been the town of Ain al-Issa, located on the east-west M4 highway, with Turkish-led forces clashing with the Kurdish militia.