Kurdish Officials: Russia-Turkey Agreement to Squeeze Us Out of Key Northern Syria Town 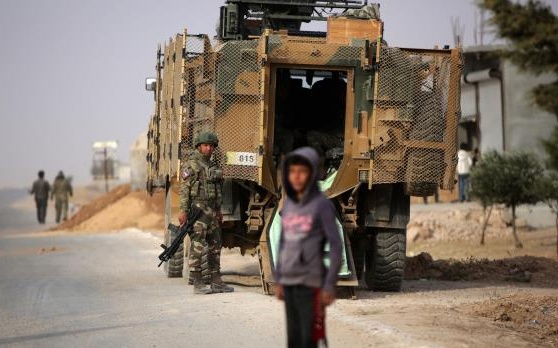 A Turkish soldier stands near his armored vehicle near the town of Ain Issa in north Syria, November 26, 2019 (Bakr Alkasem/AFP/Getty)

Kurdish officials are claiming an arrangement between Russia and Turkey to squeeze them out of the strategic town of Ain Issa in northern Syria.

Ain Issa, near the Turkish-Syrian border, is at the heart of a multi-sided battle for territory in a partitioned Syria.

Kurdish forces pushed the Islamic State out of Ain Issa in July 2015. Much of northeast Syria has been overseen by a Kurdish autonomous administration since the US-supported, Kurdish-led Syrian Democratic Forces expelled ISIS between 2017 and 2019.

But in October 2019, Turkey and anti-Assad fighters seized a corridor along the border, extending east across the Euphrates River to the Iraq frontier. They moved into Tel Abyad and Ras al-Ayn, north and east of Ain Issa.

Russia and pro-Assad forces are just to the north of Ain al-Issa along the east-west M4 highway, adding further political and military pressure on the Kurdish administration.

Last month clashes escalated between the Turkish-led force and the SDF, with the former seizing some farmland on the edge of Ain Issa and the villages of al-Jahbel and al-Musharrafa to the east. Shells struck Ain Issa, and thousands of civilians fled their homes as nearby villages.

When we refused the latest Russian demand to withdraw from Ain Issa, the situation escalated with Turkey and its Syrian proxies waging attacks on our forces on a daily basis.

Russia and Turkey seem to be in agreement to remove us from Ain Issa and its surrounding areas.

Turkey considers the Kurdish militia YPG, the leading element in the SDF, to be part of the Turkish Kurdish insurgency PKK.

A Turkish Foreign Ministry official claims, “Ain Issa has become a foothold of infiltration, harassment, and terrorist attacks for PKK/YPG. Ongoing terrorist attacks in Ras-al Ayn and [the nearby] area are the evident consequence of such hostility.”

One of them, Gelo Issa, says:

Ankara knows that the incoming U.S. administration will have a different policy towards our region, that’s why Turkish military and their Syrian militia partners will continue to pressure the Syrian Democratic Forces before [President-elect Joe] Biden takes office on January 20.

By the time new US representatives are assigned to northeast Syria, Turkey will have created a new de facto situation on the ground.

The capture of Ain Issa, with its strategic position on the M4, would cut it off from other Kurdish-controlled cities such as Raqqa, Kobani, Manbij and Qamishli.