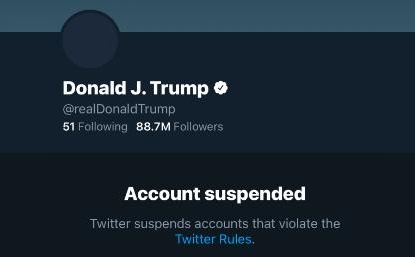 Twitter users are having a bit of fun with the ban on Donald Trump.

Hello I am brand new to Twitter, what are you guys up to

“John Barron” was a pseudonym used by Trump in the 1980s when he posed as a Trump Organization spokesman in calls to journalists.

ORIGINAL ENTRY: Twitter has permanently suspended Donald Trump’s account, “due to the risk of further incitement of violence”.

The platform had suspended Trump’s account for 12 hours on Wednesday night, after assessing the role of his tweets in the attack by his supporters on the US Capitol. It removed a video in which Trump called on the attackers to “go home” but praised them: “We love you. You’re special people.”

Trump was able to post a Thursday video in which he renounced the “heinous violence” and accepted an “orderly transition of power”. But on Friday, as he said that he would not attend President-elect Joe Biden’s inauguration, he tried to rally supporters:

The 75,000,000 great American Patriots who voted for me, AMERICA FIRST, and MAKE AMERICA GREAT AGAIN, will have a GIANT VOICE long into the future.

They will not be disrespected or treated unfairly in any way, shape or form!!!

Twitter said in a statement that it assessed Trump’s messages, after “close review” as “highly likely to encourage and inspire people to replicate the criminal acts that took place at the US Capitol on January 6, 2021”.

The company assessed how Trump’s tweets “are being received and interpreted on and off Twitter” in the context of plans circulating on social media for “future armed protests…including a proposed secondary attack on the US Capitol and state capitol buildings on January 17, 2021”.

In the context of horrific events this week, we made it clear on Wednesday that additional violations of the Twitter Rules would potentially result in this very course of action.

Our determination is that the two Tweets … are likely to inspire others to replicate the violent acts that took place on January 6, 2021, and that there are multiple indicators that they are being received and understood as encouragement to do so.

The decision followed an appeal by 350 Twitter employees to senior management to take action.

Trump Tries, Fails to Get Around Ban

The tweets were quickly removed, as a Twitter spokesperson said Trump is not allowed to use other accounts to circumvent his ban. Twitter permanently banned @TeamTrump. The platform said it will not suspend Government accounts such as @POTUS or @WhiteHouse, but it may limit their use.

The president tweeted this from the @POTUS account but the tweets have already been taken down by Twitter. pic.twitter.com/pRqpFw8hYY

On Thursday, Facebook banned Trump from posting on its platforms at least through President-elect Biden’s inauguration on January 20. It also cited the risk of incitement of violence.

Google has removed the hard-right social network Parler from its applications store, citing the platform’s role in inciting violence.

Twitter also permanently suspended the accounts of Trump associates on Thursday and Friday over violations of the policy against “coordinated harmful activity”.

Those suspended include Michael Flynn, the former National Security Advisor convicted over his role in the Trump-Russia scandal but then pardoned by Trump, and attorneys L. Lin Wood and Sidney Powell, conspiracy theorists who were part of Trump’s legal efforts trying to overturn President-elect Biden’s victory. Ron Watkins, the administration of the 8Chan platform, was also banned.

A Twitter spokesperson cite both the risk of incitement of violence, and the circulation of the conspiracy theories of the QAnon movement.

We’ve been clear that we will take strong enforcement action on behavior that has the potential to lead to offline harm, and given the renewed potential for violence surrounding this type of behavior in the coming days, we will permanently suspend accounts that are solely dedicated to sharing QAnon content.