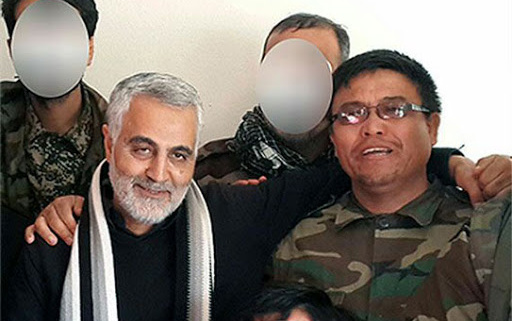 Alireza Tivasolii, A Qom seminary graduate and commander of the Fatemiyoun Brigade killed in Syria, with Maj. Gen. Qassem Soleimani, the head of the Revolutionary Guards’ Qods Force (File)

Since the Islamic Revolution in 1979, Iran’s clerical establishment has used religious organizations to expand its clout abroad.

Key among them is the Al-Mustafa International University, a network of religious seminaries based in the Shi’ite holy city of Qom that has branches in some 50 countries.

But Tehran’s adversaries say the university has been involved in espionage and recruited foreign fighters for Iran’s proxy war in Syria.

For years, experts have documented the powerful Islamic Revolutionary Guards Corps’ recruitment, training, and deployment of thousands of Shi’ite fighters to Syria to defend the country’s president, Bashar al-Assad, Tehran’s key ally in the brutal civil war that erupted in 2011.

The United States imposed sanctions on the massive university network on December 8, alleging that it was involved in the recruitment of Afghan and Pakistani students to fight in the Syrian conflict.

The US Treasury Department said Iran’s elite Quds Force, the overseas operations arm of the IRGC, used the university’s foreign branches as a “recruitment platform” for “intelligence collection and operations”, including recruitment for pro-Iranian militias.

The Treasury Department alleged that the Quds Force used the Al-Mustafa International University as a “cover” to recruit Afghans for the blacklisted Fatemiyoun Brigade, a pro-Iranian militia that fought in Syria.

Moreover, Treasury said the Quds Force also used Al-Mustafa’s campus in Qom “as a recruitment ground” for Pakistani students to join the blacklisted Zeynabiyoun Brigade, a militia that consisted of Pakistani Shi’a.

Treasury added that “multiple students from the university have been killed fighting in Syria”.

In a statement on December 9, the university said it promoted “peace, friendship, and brotherhood among nations” and slammed the U.S. decision as “hegemonic”.

Ali Alfoneh, a senior fellow at the Arab Gulf States Institute in Washington who has closely monitored IRGC activity in Syria, said that according to his database from January 2012 to December 2020, 3,059 Iranian and allied foreign fighters were killed in combat in Syria.

Alfoneh says of those, only three were students or graduates of the Al-Mustafa International University — known as Jamiat al-Mostafa University in Iran.

“This indicates that Jamiat al-Mostafa has never served as the primary recruitment ground for the IRGC’s war effort in Syria,” he says.

The IRGC recruited thousands of Afghan migrants and refugees within its own borders and covertly drafted hundreds of Shi’a inside Afghanistan. The same strategy was used to recruit Pakistanis.

Alfoneh says the “three individuals identified appear to have been in command, intelligence, or political-ideological indoctrination positions”.

That means, he said, that the IRGC perceived the graduates or students of the Al-Mustafa International University as “high-value individuals”.

Regular fighters in the poorly trained forces of the Fatemiyoun and Zeynabiyoun brigades were often used as the first line of attack.

Alfoneh says the IRGC considered the Afghan fighters “cannon fodder”, considering the seemingly minor investment made to train them and the exposure they faced on the battlefield.

The total number of Fatemiyoun members who fought in Syria is unclear. Experts estimate the number was between 5,000 to 20,000, although Alfoneh says the figure is likely closer to the lower figure cited.

The United Nations High Commissioner for Refugees estimates there to be some 3.5 million documented and undocumented Afghan refugees and migrants living in Iran. Tehran has expelled many Afghans and periodically threatens those who remain with mass expulsion.

Among the three Al-Mustafa students or graduates killed in Syria was Seyyed Hashmat-Ali Shah, a Pakistani national and graduate of Al-Mustafa. He was a member of the Zeynabiyoun Brigade and was killed in combat in Syria in September 2016.

Another Pakistani national was Mohammad-Hossein Momeni, also known as Mohammad Hosseini, a student at Al-Mustafa who was killed in Syria in April.

The most prominent graduate of the university was Alireza Tivasolii, the Afghan commander of the Fatemiyoun Brigade.

Also known as Abu Hamed, he was killed in 2015 during clashes with the Al Qa’eda-linked Jabhat al-Nusra in the southern Syrian province of Daraa.

Tivasolii moved with his family to Iran during the Soviet occupation of Afghanistan. Soon after, he volunteered for the Abouzar Brigade, an Afghan militia that had fought on Iran’s side in the war against Iraq.

After the war ended in 1988, Tivasolii enrolled and then graduated from the Al-Mustafa International University in Qom.

In the 1990s, he returned briefly to his native Afghanistan to fight the Taliban, which had seized large swaths of the country after the Soviet withdrawal and a devastating civil war.

Tivasolii also fought alongside the Iranian-backed Hizballah movement in Lebanon during the war with Israel in 2006.

In 2015, a large funeral was held for Tivasolii in his adopted city of Mashhad, in northwestern Iran. Iranian state media reported that Tivasolii was trusted by the former powerful commander of the Quds Force, Qasem Soleimani, who was killed in a U.S. air strike in January 2020.

The hard-line Rajanews.ir posted a photo of Soleimani and Tivasolii in military uniform.

With the Syrian war ebbing, most fighters in the Fatemiyoun and Zeynabiyoun brigades have returned to Iran or their homelands.