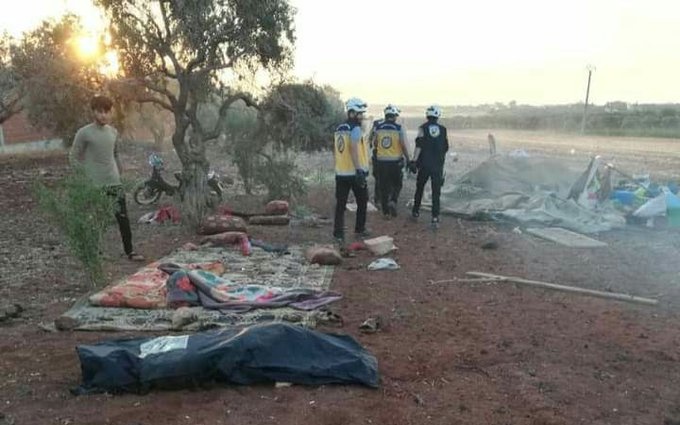 White Helmets rescuers at the site of Russia bombing of Binnish, Idlib Province, northwest Syria, with a body in the foreground, August 3, 2020

Russian warplanes have bombed the town of Binnish in opposition-held northwest Syria, breaking the ceasefire that Moscow declared with Turkey on March 5.

Activists said at least four people were killed on Monday morning. Video showed three slain family members, who had apparently been displaced and lived in the open (Warning: Graphic):

Russia resumed bombing of Idlib and western Aleppo Provinces in June. Monday’s strike was the first since attacks on July 14-15, after three Russian troops suffered minor attack when their patrol was struck by an improvised explosive device.

The attacks set aside the March agreement between Vladimir Putin and Turkish President Recep Tayyip Erdoğan, which halted an 11-month Russian-regime offensive that seized almost all of northern Hama Province and parts of neighboring Idlib.

The offensive killed about 2,000 civilians, wounded thousands, and displaced more than a million. There were more than 70 attacks on medical facilities, and numerous schools, markets, mosques, and other civilian sites were bombed.

The UN estimates that about 3 million people, many of them displaced from other parts of Syria, live in the greater Idlib area. Russia used its UN Security Council veto last month to cut all cross-border assistance to civilans.