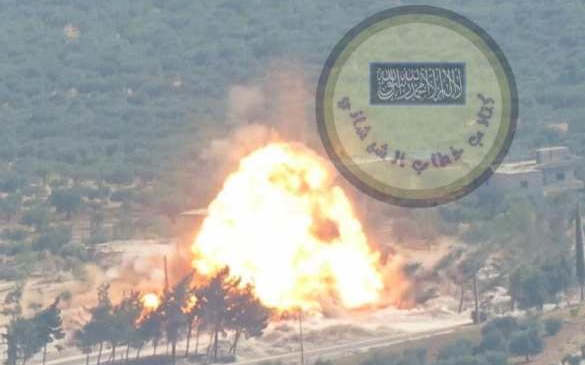 Claimed image, from a purported anti-Assad faction, of car bombing of a Russian-Turkish patrol in southern Idlib Province, Syria, July 14, 2020

Russia has continued airstrikes on northwest Syria, following a suicide car bombing of a Turkish-Russian patrol on Tuesday.

The latest Russian attacks were on al-Bab in western Aleppo Province.

Nine civilians have been injured, including one child in a critical condition, due to airstrikes that targeted residential neighborhoods in #Albab city in eastern #Aleppo countryside. Our #Whitehelmets continue their search and rescue operations to save lives. pic.twitter.com/cWJ5AzWFpV

But a well-placed military analyst has raised questions over whether an anti-Assad group carried out Tuesday’s car bombing, or if it was carried out as a pretext for renewed Russian-regime attacks on civilian areas in northwest Syria.

A previously-unknown faction, the Khattab al-Shishani Brigades, initially claimed responsibility. However, Syria experts could find no previous reference to the group and question if it exists.

The military analyst noted, from video and sources, that the car was at least five meters from the Russian-Turkish patrol on the M4 highway when it detonated.

The blast looked huge in the video, but actually that was more due to its fuel load than actual explosives. The payload was powerful enough to push the Russian vehicle a few meters, but not strong enough to cause serious damage. therefore the Russian crew suffered only light injuries: they were all able to walk when the Turkish forces evacuated them to their next checkpoint.

So the attack was designed to create a lot of fuss while causing minimal actual damage.

The analyst concludes, “All this point to a Russian black op that used an Assadist cell in Idlib [Province]. The Russians, as well as their [pro-Assad] militias ‘retaliated’ in their usual way by solely attacking civilians and civilian infrastructure. No anti-Assad fighters were harmed.”

The wounded Russian soldiers were rescued at the Turkish base near the site of the explosion, after which they were transferred to a Russian room. pic.twitter.com/9Q8JYKfRtJ

ORIGINAL ENTRY, JULY 15: Russia has set aside a ceasefire agreement to bomb northwest Syria, after three of its soldiers were injured in a roadside attack.

Russian warplanes and pro-Assad artillery struck the Jabal al-Zawiya region in southern Idlib Province, hours after a Turkish-Russian patrol was attacked along the cross-Idlib M4 highway.

The White Helmets civil defense said five civilians were injured, and witnesses said hundreds of civilians fled. A local pro-opposition correspondent said a father and his child had died of their wounds.

Reports varied on whether the patrol was hit by a suicide car bomber or by a roadside improvised explosive device near the town of Ariha.

Announcing the injuries, the Russian Defense Ministry said an IED damaged one Russian and one Turkish armored personnel carrier. The Russian statement said Turkish troops were hurt, but two sources said there were no Turkish casualties.

Turkey’s Defense Ministry later said a car bomb damaged two vehicles but no one was killed.

#Syria: attack on joint #TSK–#Russia|n patrol today on M4 Highway was filmed by a Russian vehicle. Video confirms it was a suicide attack (SVBIED). 3 wounded among Russian troops. Operation was claimed by unknown Chechen group. pic.twitter.com/QtJX1ZgE2M

A purported anti-Assad faction, the Khattab al-Shishani Brigades, claimed responsibility for a suicide car bomb: “Our Knight attacked the [Turkish-Russian] negotiations table, to sign it with his blood, fire, steel, and blazing heat.”

But a military analyst cautioned, “No one knows the group [Khattab al-Shishani] that undertook the attack in Idlib. Many military sources on the ground state that there is no such group.”

The Russians said patrols had been halted, with troops and equipment pulled back to the Hmeimim base in western Syria.

The outcome of the bombing on #Idlib so far
9 Russian air strikes
33 missile launcher
21 shells
Shelling on #Al_Duqmaq and towns #Kansafra, and #Kafr_Aweid, #Hmeimat and the outskirts of the city of #Ariha
Two raids on #Benin pic.twitter.com/uWbRaIWbTN

The patrols were initiated by a March 5 agreement between Turkish President Recep Tayyip Erdoğan and Russian counterpart Vladimir Putin, which halted an 11-month Russian-regime offensive that seized parts of southern Idlib Province and almost all of neighboring northern Hama Province.

The offensive killed about 2,000 civilians, wounded thousands, and displaced more than 1 million before it was checked by Turkish attacks on pro-Assad positions in February.

The Turkish-Russian patrols were planned for a 12-km (7.5-mile) corridor along the east-west M4 highway. But they were immediately challenged by protests by residents, who dug up the route.

In the face of the demonstrations, Russian patrols have been able to move along a few kilometers of the M4.