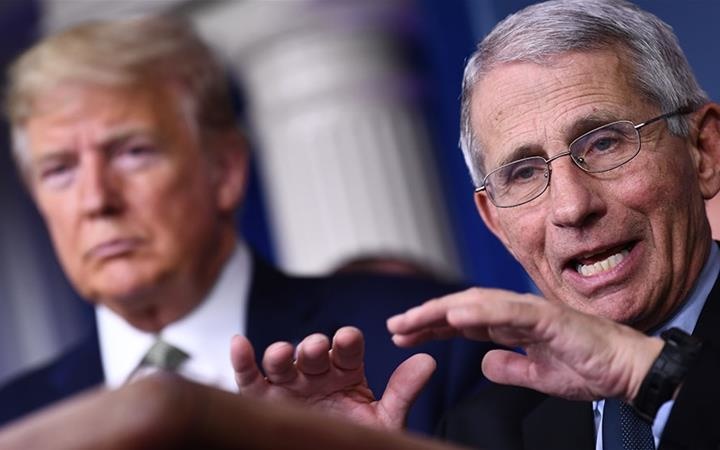 In a day of Twitter and golf amid the Coronavirus pandemic, Donald Trump again attack the White House’s top expert on the virus, Dr. Anthony Fauci.

Angered at Fauci’s assessment the quick “reopening” of the US — demanded by Trump as he seeks re-election — fed a resurgence of the outbreak, Trump shouted, “Wrong!” He then repeated his standard falsehoods: 1) that the US has tested “far more”, per capita, than any other country in the world; and 2) that the record-setting increase in cases this month, with all but a few states beset by a rise in infections, is due solely to an increase in testing.

Fauci told a House committee hearing on Thursday that European countries have been able to check the virus because they closed 95% of their economies this spring before embarking on a cautious, staged reopening. In contrast, he noted, only half of the US economy had been paused for a few weeks before quick reopening, mainly by Trump-allied State governors, from the start of May.

Trump spent the day on his golf course in Virginia. He then launched a Twitter spree until well after midnight, with dozens of tweets and retweets assailing his perceived enemies. Betraying his concern that he is well behind Democratic President nominee Joe Biden in polling, many of the messages attacked the former Vice President, other Democratic figures, and cities with Democrat leaders.

Trump and his inner circle have assailed Fauci since early June, as the virus began its resurgence after State governors reopened businesses, restaurants, bars, beaches, and other public spaces.

The White House banned Fauci from US TV interviews. However, the expert put out his assessments through Congressional testimony, webcasts, and interviews with foreign outlets.

Two weeks ago, Trump authorized an all-out assault by his trade advisor Peter Navarro in an opinion article in USA Today, “Dr. Anthony Fauci has a good bedside manner with the public, but he has been wrong about everything I have interacted with him on.”

After the cold reception for the assault, the White House quickly disowned the article. However, Trump continued his portrayal of Fauci as “wrong” and “a bit alarmist”.

On Tuesday, Trump posted a retweet combining a smear of the doctor and support for Trump’s promotion of the ineffective and dangerous drug hydroxylchloroquine, “Dr. Fauci has misled the American public on many issues, but in particular, on dismissing #hydroxychloroquine and calling Remdesivir the new gold standard.”

Yesterday Richard Grenell, Trump’s former Ambassador to Germany and Acting Director of National Intelligence, carried out the attack. He retweeted a message from a “doctor”: “Dr. Fauci is misleading the American people when he says that randomized controlled trials have shown hydroxychloroquine to be ineffective.”

Since March, all clinical trials of hydroxychloroquine have assessed that it has no effect in mitigating Coronavirus, and they have reinforced that its side effects include life-threatening interruption of heart rates. The Food and Drug Administration has withdrawn its authorization of the drug for emergency use in virus cases.

In recent weeks, Trump has quashed a series of medical and public health assessments, as he demanded that schools fully reopen from next month. The Centers for Disease Control assessment of safety in schools, churches, and other premises was buried, and a Health and Human Services committee forced the CDC to issue a statement echoing Trump’s line.

See TrumpWatch, Day 1,282: Coronavirus — CDC Caves In to Trump Over Reopening of Schools

This spring the Trump camp dismissed the Inspector General of HHS, Christi Grimm, when she disseminated a report about shortages of essential equipment and protective clothing in many US hospitals.