How Widespread is Coronavirus in Regime-Held Parts of Syria? 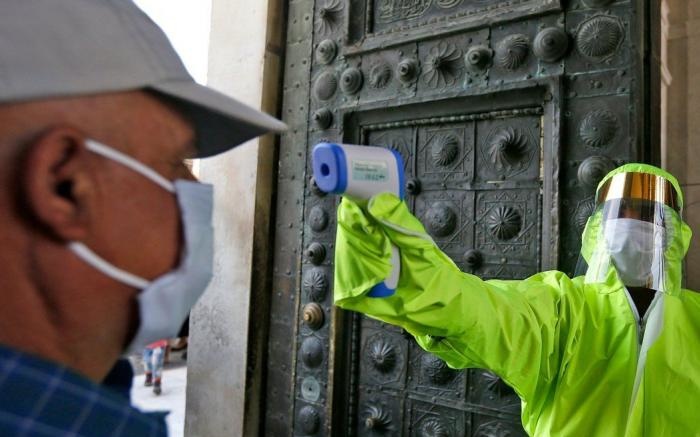 A medic checks the temperature of a worshipper in front of the Umayyad Mosque, Damascus, Syria, May 15, 2020 (Louai Beshara/AFP/Getty)

Reports are growing of a Coronavirus outbreak in Syria which is far higher than the official total put out by the Assad regime.

The Health Ministry is only acknowledging 780 cases, with 23 announced on Saturday. The Ministry says there have been 43 deaths, a significant increase from the total of nine on July 4.

However, since March 22, when the regime announced the first fatality, medics, activists, and residents have said that the extent of the outbreak is being covered up.

Those claims are rising faster than the regime’s official toll. A medical worker, who asked not to be named because of fear of arrest, told the US outlet NPR, “There are continuous warnings against doctors speaking on this issue….We are all scared, all the time.”

The medic said the regime initially called upon “loyalist” doctors, but there were not enough to cope with the rise in cases. So intelligence officers maintain surveillance of hospitals, intimidating staff so they are wary of sharing information with each other. Staff have to buy their own masks because of the lack of protective equipment.

Dr. Akjemal Magtymova, the World Health Organization representative in Damascus, said she believes there is a “steep rise” in Coronavirus transmission.

Residents back up the assessment, saying they have relatives who have contracted the virus.

From a credible source from Damascus: the death cases in Damascus and Damascus countryside yesterday on the 31st of July was 193 cases. Assad's regime didn't announce about it.
The photo is from the office of picking up the dead bodies. pic.twitter.com/IgkfEF7C94

The UN’s humanitarian agency and the WHO reported last week that 44 health care workers in Syria have tested positive. The first confirmed cases in opposition-held northwest Syria were of medical staff, fueling fears of a rapid spread through overcrowded camps with poor hygiene.

Zaher Sahloul, the President of the US-based charity MedGlobal, told NPR that he knows of seven doctors who have died in Syria from the virus in the last two weeks.

The regime’s Health and Information Ministries refused comment on the reports.

The Assad regime introduced a curfew and closed schools, universities, and public spaces in April. However, amid shortages, a collapsing currency, and rampant inflation, it began easing the restrictions in late May.