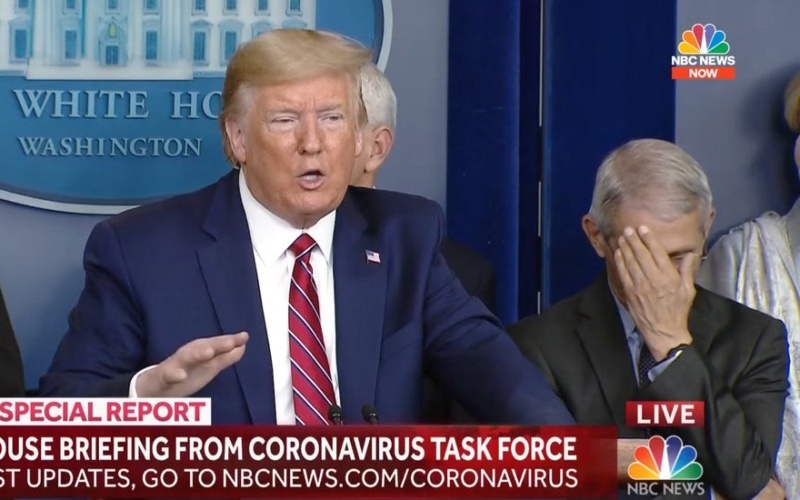 Dr Anthony Fauci (R) reacts to a statement by Donald Trump at a White House briefing on Coronavirus, March 20, 2020

The White House is blocking Dr Anthony Fauci, its top infectious diseases expert, from testifying before a House subcommittee investigating the Coronavirus outbreak and Administration response.

The House Appropriations Committee has asked Fauci to appear next week, but a spokesman said Friday that the White House had intervened.

While the Trump Administration continues its whole-of-government response to COVID-19, including safely opening up America again and expediting vaccine development, it is counterproductive to have the very individuals involved in those efforts appearing at congressional hearings.

We are committed to working with Congress to offer testimony at the appropriate time.

A “senior Administration official” claimed Fauci will appear at a Senate hearing the week after next.

He did not give a specific reason why Fauci is not being permitted to testify to the House subcommittee.

The subcommittee will instead hear from Thomas Frieden, who led the Centers for Disease Control and Prevention during the Obama Administration.

On Friday night, the White House replaced a top official at the Department of Health and Human Services who angered Donald Trump with a report highlighting medical supply shortages and testing delays at hospitals.

The dismissal of Christi Grimm, the principal deputy inspector general, was announced after business hours.

Grimm’s report in late March, based on extensive interviews with hospitals across the US, identified critical shortages. Hundreds of medical centers were struggling to obtain test kits, protective gear for staff members, and ventilators.

Trump was asked at an April 6 briefing about the report.

Showing no knowledge of the study, he insisted, “It’s just wrong. Did I hear the word ‘inspector general’? Really? It’s wrong.”

When the reporter did not know, Trump insisted. “Well, find me his name.”

Trump later insisted that the report was politically biased because Grimm was in post during the Obama Administration.

Why didn’t the I.G., who spent 8 years with the Obama Administration (Did she Report on the failed H1N1 Swine Flu debacle where 17,000 people died?), want to talk to the Admirals, Generals, V.P. & others in charge, before doing her report. Another Fake Dossier!

In fact, Grimm is not a political appointee but a career official who began working in the inspector general’s office late in the Clinton Administration and continued in the George W. Bush Administration.

The firing is the latest of officials trying to contain the Coronavirus epidemic after they angered or unsettled Trump.

In early April, Glenn Fine, the acting inspector general for the Defense Department, was dismissed just before he became chairman of a new Pandemic Response Accountability Committee overseeing the distribution of Coronavirus relief funds.

Two weeks later, Dr. Rick Bright, who led the US Government agency developing a Coronavirus vaccine, was removed after demanding rigorous vetting of hydroxychloroquine, the anti-malaria drug pushed by Trump as a “wonder cure” for the virus.

He has avoided direct contradiction of Trump’s disinformation. Instead, the doctor has used interviews to maintain a line for stay-at-home orders and social distancing, defying Trump’s priority on a “re-opening” of the US despite the risks of a resurgent virus.

In an interview in March, he said, “When you’re dealing with the White House, sometimes you have to say things one, two, three, four times, and then it happens. So, I’m going to keep pushing.”

Fauci has been at fewer and fewer briefings in the past month. Instead, Trump has preferred Dr Deborah Birx, the White House Coronavirus coordinator, who has provided public cover for his statements such as the recommendation of ingesting disinfectant.

See also EA on talkRADIO: Why is No One Stopping Trump’s Dangerous Coronavirus Statements?