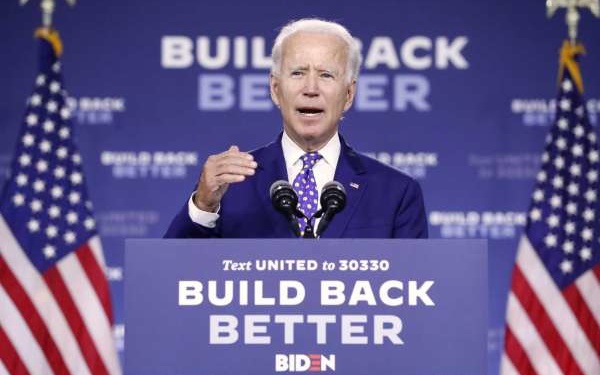 Democratic Presidential nominee Joe Biden has said that division is the “last thing” the US needs as it faces the Coronavirus crisis, a sinking economy, and the issues raised by the Black Lives Matter marches.

The developments came as the US death toll from Coronavirus reached 149,256, with 1,245 fatalities on Tuesday. It was the sixth consecutive weekday with more than 1,000 deaths.

Confirmed cases are 4,351,997, a rise of 61,738 in 24 hours. Almost two months after infections began their resurgence, 37 of 50 states are still showing an increasing rate of the virus over the past two weeks.

Biden spoke in Wilmington, Delaware, about the fourth plank of his “Build Back Better” plan for environmental protection and economic recovery.

He called on the Senate to pass the Voting Rights Act and name it after long-time Representative and civil rights activist John Lewis, whose body lay in state at the US Capitol on Wednesday.

He then challenged Trump over the deployment of Homeland Security troops to Portland, Oregon, where they have beaten protesters and put them in unmarked vehicles.

This isn’t about law and order. It’s about a political strategy to revive a failing campaign.”

Asked if he is running for President to enact a policy agenda, Biden replied, “I’m running because Trump is the president, and I think our democracy’s at stake, for real.”

Trump later appeared at the White House, without the presence of any medical or public health expert, in an attempt to show leadership on Coronavirus. He proclaimed a $765 million loan to camera company Eastman Kodak to manufacture pharmaceutical ingredients.

The loan is the first by the US International Development Finance Corporation after it was authorized in May to assist in manufacturing to combat the virus.

But Trump had already undermined his display by starting the day with retweets attacking Dr. Fauci, the highly-regarded director of the National Institute of Allergy and Infectious Diseases.

One of the retweets combined a smear of the expert and support for Trump’s promotion of the anti-malarial drug hydroxylchloroquine, “Dr. Fauci has misled the American public on many issues, but in particular, on dismissing #hydroxychloroquine and calling Remdesivir the new gold standard.”

Trump then retweeted a series of messages touting hydroxylchloroquine, even though no substantial clinical trial has shown any positive effect. Instead, the tests have supported warnings that the drug can cause serious health conditions and even death by interrupting the heart rate.

Twitter finally intervened after Donald Trump Jr. retweeted a video by a purported doctor making false claims about hydroxylchloroquine. The platform removed the clip and limited Trump Jr’s account for 12 hours, over the spreading of disinformation.

Asked at the White House about the drug — including the conspiracy theories about aliens from the doctor pushing the “cure” — Trump abruptly ended the conference, saying:

I’ve read a lot about hydroxy….I think it could have a very positive impact in the early stages and I don’t think you lose anything by doing it.

TRUMP: "I can tell you this: She was on air, along with many other doctors, & they were big fans of hydroxychloroquine. I thought she was very impressive" pic.twitter.com/nSui8DOLDL

Trump and his inner circle have assailed Fauci for weeks, unsettled that the doctor is saying the US is “still in the first wave” of Coronavirus and faces a “very distressing” death toll. That medical assessment threatens Trump’s priority, as he seeks re-election, of the “re-opening” of the US despite the virus’s surge.

Asked how he can continue to provide expertise to the American public amid Trump’s attacks on his credibility, Fauci said on Tuesday morning, “You know…I don’t know how to address that. I’m just going to certainly continue doing my job.”

.@ABC NEWS EXCLUSIVE: Dr. Anthony Fauci speaks to @GStephanopoulos about his response to Pres. Trump’s tweets, how states can avoid COVID-19 surges and why he is “cautiously optimistic” about a vaccine. https://t.co/JgCvhTifYS pic.twitter.com/BOcoCbyrqa

Fauci summarized the evidence that “it is very important” that masks are always worn in public places, and that hydroxychloroquine does not “cure” the virus: “I go along with the FDA [Food and Drug Administration’s removal of the drug as a recommended emergency treatment]. The overwhelming, prevailing clinical trials that have looked at the efficacy of hydroxychloroquine have indicated that it is not effective.”

He reiterated, “I have not been misleading the American public.”

Trump’s political appointee, Attorney General William Barr, began his appearance at the House Judiciary Committee with a token denunciation of the May 25 murder of George Floyd, which spurred Black Lives Matter marches across the US.

But he denied any “systemic racism” and put the blame, echoing Trump’s words and without offering evidence, on “violent rioters and anarchists [who] have hijacked legitimate protests to wreak senseless havoc and destruction on innocent victims”.

(Black people are much more likely than whites to be killed by cops https://t.co/dG7I2Ct8k6) pic.twitter.com/Mn918jr7Mv

With Democratic legislators asked if the crackdown on marches was part of a Trump re-election strategy, Barr refused to address the matter directly:

I’m not going to get into my discussions with the President….I’m a member of the cabinet, and there’s an election going on. Obviously the topic comes up.

But he ran into trouble when challenged over why Homeland Security forces were deployed in Portland but not in Michigan, where armed far-right protesters charged into the State Capitol building.

.@RepJayapal: "You are aware of certain kinds of protesters, but in Michigan when protesters carried guns & Confederate flags & called for the governor of Michigan to be shot and lynched, somehow you are not aware of that … there is a discrepancy." pic.twitter.com/qAr8HGhr1F

Barr twice refused to criticize a political candidate who accepted foreign assistance in a US election, before finally saying that it is inappropriate.

.@davidcicilline: Is it ever appropriate for a president to accept foreign assistance in an election?

BARR: … it depends on the assistance pic.twitter.com/6SvFmfUazB

The Attorney General also tried to carry water for Trump over the Coronavirus toll, insisting that the fault lay with Barack Obama: “The problem with the testing system was a function of President Obama’s mishandling of the CDC [Centers for Disease Control and Prevention.”