TrumpWatch, Day 1,282: Coronavirus — CDC Caves In to Trump Over Reopening of Schools 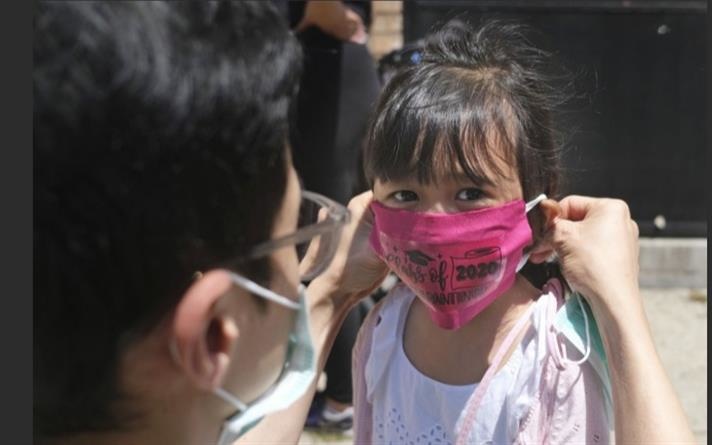 A father helps his daughter with a new mask at a graduation ceremony for her pre-kindergarten class, Jersey City, New Jersey, June 10,2020 (Seth Wenig/AP)

The Centers for Disease Control and Prevention surrender to Donald Trump over the full reopening of schools, despite the threat to students, staff, and the general public from the spread of Coronavirus.

The CDC’s issuance of a new guidance following Trump’s command for reopening, after the Administration quashed health and safety advice earlier this month, came as the US recorded its second-highest number of daily cases and its highest rise in deaths since mid-May.

The record of 78,309 was set on July 16, the same day that Press Secretary Kayleigh McEnany said that “the science should not stand in the way” of school reopenings.

Infections are rising in 45 of 50 states after many Governors followed Trump’s insistence on quick reopening of businesses, restaurants, beaches, and other public facilities.

In Starr County in South Texas, an ethics committee has been established to help medics determine which patients should be treated and which should be sent home to die. The county, with a single hospital, has about 2,350 infections per 100,000 people.

The CDC’s new schools guidance, “The Importance of Reopening Schools This Fall”, sets aside medical and public health advisory for political rhetoric.

Reopening schools creates opportunity to invest in the education, well-being, and future of one of America’s greatest assets — our children — while taking every precaution to protect students, teachers, staff and all their families.

The new statement was written by a working group convened by Health and Human Services officials. A “federal official familiar with the group” said it had minimal representation from the CDC.

The official said CDC experts were prevented from direct communication with the group because their input on the statement was seen by the HHS as too cautious. Instead, the group worked with the office of CDC director Robert Redfield, which did seek expert input.

Following Trump’s line, the guidance declares, “The best available evidence indicates if children become infected, they are far less likely to suffer severe symptoms,” a conclusion which is still being debated by epidemiologists.

The document’s technical guidance is more functional, with advice on face coverings, mitigation measures, and social distancing. That follows the CDC’s passages in versions that were blocked by the Administration because of the recommendation for on-line as well as in-class instruction.

CDC Director Robert Redfield immediately stepped away from the guidance.

In a Friday call with reporters, he said, “The goal line is to get the majority of these students back to face-to-face learning.”

However, he said the guidance was not meant to replace the CDC’s earlier guidance with its emphasis on safe, limited reopening. Instead, the HHS group’s version is “to really help put some more granular detail in how administrators and parents can begin to think about putting those guidelines into a practical plan”.

Redfield said that he understood the “trepidation” of parents and teachers over reopening and, contradicting the new guidance, that decisions should be made based on levels of infection in each community.

In a poll released this week by the Kaiser Family Foundation, 60% of parents — and 76% of parents of color — strongly prefer that schools wait to restart in-class instruction. About 90% of parents of color said they are “very worried” or “somewhat worried” about their child falling sick with Coronavirus, with 55% of white parents expressing the concern.