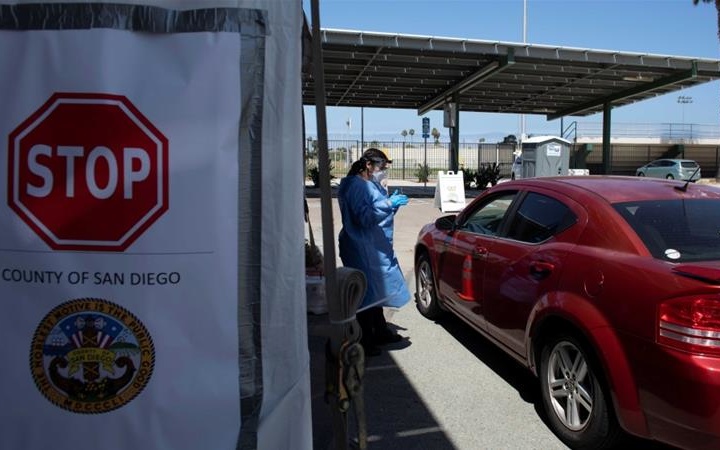 Daily deaths from Coronavirus resurge to almost 1,200 and cases near 4 million. But seeking re-election, Donald Trump ignores the development to threaten the deployment of federal troops in US cities.

The US recorded 1,195 fatalities on Wednesday, the second day in a row of more than 1,000 deaths after more than seven weeks below that level. Total deaths are now 143,190.

While the average number of tests has risen by 80% since early June to 780,000 per day, daily cases have surged by 215%. The positive rate, which was less than 5% across the US almost two months, is now above 20% in some areas.

Florida is recording almost 11,000 cases per day, more than 450% the amount expected from increased testing. The state is now third in the US for confirmed cases

On Wednesday, California passed New York for the highest number of cases. The state announced a daily record of more than 12,100.

However, New York, the initial epicenter of the US pandemic, has suffered 32,558. With its later surge, California has 8,047, the fourth-highest toll in the country.

On Tuesday, Trump tried to reassert a show of authority by resuming daily Coronavirus briefings. He had suspended them in late May, after embarrassing criticism over his recommendations that people cure Coronavirus with ingestion of disinfectant and ultraviolet treatment.

The Government’s medical experts, including Drs. Anthony Fauci and Deborah Birx, were shut out as Trump continued to reject public health advice on containment of the virus.

On Wednesday, Trump essentially gave up the electoral tactic of speaking about the virus. He began by blaming Black Lives Matter marches and Mexico for the resurgence, and said, “It would be great if we go into the hospital and cure people.”

But he then devoted his appearance to his threats against the demonstrations and mythical extremists, anarchists, and radicals.

Trump’s dispatch to Portland, Oregon of Homeland Security officers, in unmarked uniformed and vehicles, has drawn widespread criticism as the force has detained and beaten demonstrators. Local and state officials, including Oregon’s governor and Portland’s mayor, have called for the withdrawal of the officers.

However, Trump doubled down on the campaign tactic yesterday. He threatened the deployment of troops in other cities, “Today, I’m announcing a surge of federal law enforcement into American communities plagued by violent crime.”

Trump did not explain how assailing mainly-peaceful protests would address the crimes.

Mayor of Portland, Oregon, gets tear gassed by federal agents at a protest against their presence amid unrest in the city. https://t.co/iXVSs17NUA pic.twitter.com/dio51sUjtr

Instead, Trump whipped up his specter of dangerous immigrants and extremists enabled by his “deadly” political opponents.

My administration will be working to remove dangerous offenders sprung loose by these deadly policies and, frankly, by these deadly politicians. America must be a sanctuary for law-abiding citizens, not criminal aliens. My vision for America’s cities could not be more different from the lawlessness being pushed by the extreme radical left.

Trump on sending federal law enforcement agents into Chicago against mayor's will: "There will be a time when they're gonna want us to go in full blast … we're arresting a lot of people that have been very bad." pic.twitter.com/2rg9WDQlGr

Trump and his political ally, Attorney General William Barr, said Chicago and Albuquerque would be among the first cities occupied by federal forces. Barr lied that an initial operation in Kansas City had made 200 arrests in two weeks.

Lori Lightfoot, the mayor of Chicago, stood firm against military or paramilitary intervention, “Under no circumstances will I allow Donald Trump’s troops to come to Chicago and terrorize our residents.

Sen. Martin Heinrich of New Mexico said “Instead of collaborating with the Albuquerque police department, the sheriff is inviting the President’s stormtroopers into Albuquerque.”

Trump first announced military deployment on June 1, a week after the murder of George Floyd at the hands of police in Minneapolis. He then walked from the White House across the street to St. John’s Church, where he held a Bible upside down.

But the show backfired as security forces, on the orders of Barr, tear-gassed peaceful demonstrators in Lafayette Park to clear a path for Trump’s walk. Under intense criticism, the Administration stepped back from deployment.

Trump on sending federal law enforcement agents into Chicago against mayor's will: "There will be a time when they're gonna want us to go in full blast … we're arresting a lot of people that have been very bad." pic.twitter.com/2rg9WDQlGr