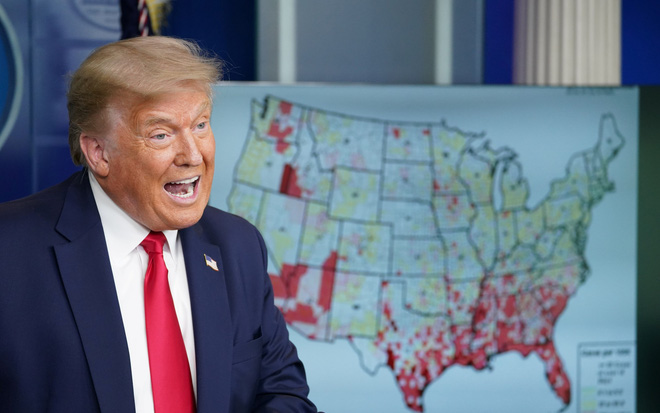 A few hours after cancelling the GOP convention, Donald Trump returned to his Coronavirus denial.

Speaking with his friend Sean Hannity on Fox TV, Trump said, “We have large sections of the country that are in great shape.”

Trump also bragged about Homeland Security officers beating up and tear-gassing Black Lives Matter protesters in Portland, Oregon. Misnaming Mayor Ted Wheeler as “Mayor Whelan”, he gloated, “They knocked the hell out of him. That was the end of him.”

He continued his threat to deploy US military and paramilitary forces in other cities, over the objections of state and local officials, “At some point, we’re going to have to do something much stronger than being invited in.”

ORIGINAL ENTRY: In an abrupt reversal, Donald Trump acknowledges the threat of Coronavirus as he cancels the Republican convention scheduled for Jacksonville, Florida next month.

Only 48 hours after repeating his insistence that the virus will disappear, Trump used a White House appearance to concede that the gathering could fuel Florida’s record-setting surge in cases.

With Trump ally Gov. Ron DeSantis following Trump’s command to “reopen” as quickly as possible, Florida has reached more than 15,000 daily cases, the fourth-highest total in the world behind the US, Brazil, and India. With almost 390,000 confirmed infections, it is now third in the country behind California and New York.

In June, Trump had moved the GOP convention from Charlotte, North Carolina when Gov. Roy Cooper insisted on social distancing. Trump subsequently held a campaign rally in Tulsa, Oklahoma, but the event backfired when less than 7,000 people turned up in the 19,199-seat arena, and the city soon recorded hundreds of new cases including Oklahoma Gov. Kevin Stitt.

Lagging in polls behind Democratic nominee Joe Biden, Trump finally stepped back from months of Coronavirus denial on Wednesday, “We won’t do a big, crowded convention, per se — it’s not the right time for that.”

He gave no explanation for his sudden embrace of medical and public health advice, after ostracizing the Government’s experts, belittling Dr. Anthony Fauci, burying the guidance of the Centers for Disease Control, and threatening schools with withdrawal of funding if they do not fully reopen from next month.

But in a Quinnipiac University poll, released on Thursday, 62% of Florida voters said the convention would be unsafe. The survey showed Biden leading Trump by 13% — in Quinnipiac April poll, Biden was up by 4%.

Trump stuck to some of his derogatory and diversionary lines, opening with the reference “the China virus” and blaming Black Lives Matters marches and young people for the spread of infections.

Reading from a script, he doubled down on his threat over school funding, with a bizarre interruption to introduce famous baseball play Mariano Rivera, “He loves children.”

Off-script as he answered a question, Trump returned to his assurance that “the virus goes away quickly”.

But in another sign of his retreat, White House Coronavirus Task Force coordinator Dr. Elizabeth Birx was in the room. She had been left outside on Tuesday when Trump resumed the appearances after a break of almost two months.

Birx Warns of Surge in 12 Cities

Publicly Birx has been wary of challenging Trump’s dismissal of the threat. In contrast, Dr. Anthony Fauci — barred by the White House from US TV interviews — has been using Congressional testimony, webcasts, and interviews with foreign outlets to emphasize that the US is “still in a first wave” with the prospect of a “very disturbing” death toll.

Birx told the officials, “I know it may look small, and you may say that [the positive test rate] only went from 5 to 5 1/2 [percent], and we’re going to wait and see what happens.

If you wait another three to four, even five, days, you’ll start to see a dramatic increase in cases. So finding and tracing those very early individuals is really critical.

In some parts of the US, including Florida and Arizona, the positive test rate has soared above 20%.

Last week, a confidential White House report warned of 18 states as “red zones” and recommended the rollback of reopening measures.

Fauci warned Wednesday in a livestream Q&A with a nonprofit group:

I’m not even sure we’re halfway through. I mean, obviously, if you want to do a score, I don’t want to get too cute about it, but certainly we are not winning the game right now, we are not leading it.