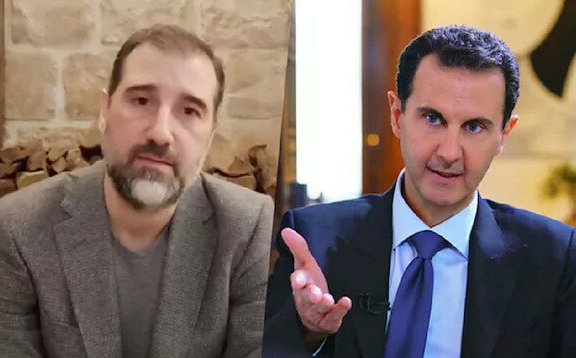 Rami Makhlouf, the out-of-favor tycoon cousin of Bashar al-Assad, has exposed the sanctions-busting to benefit the regime amid Syria’s 112-month conflict.

In his latest Facebook post on Sunday, Makhlouf described his establishment of a web of offshore front companies.

At the same time, he continued his denunciation of regime officials and security services who have seized his assets, imposed a travel ban, and, according to Makhlouf, threatened his staff since the spring.

“They fabricated our embezzlement of funds and transfer to our accounts abroad….Stop these unjust claims and read well the contracts,” Makhlouf wrote. “These companies’ role and aim is to circumvent sanctions on Cham Holding.”

He declared a “Hollywood episode” against him: “Some in the security apparatus have sworn not to leave any investor in the country, except the war profiteers.”

“These Guys Want Everything”

Cham Holding, set up by Makhlouf with 70 investors in 2005, has the largest capital of any Syrian company and enjoys a monopoly on key property developments.

The umbrella company was established as the regime needed $85 billion over five years to repair infrastructure. However, regional businessmen said the firm failed to attract significant investment, because of concerns over corruption and lack of expertise as well as the Syrian uprising and sanctions.

Makhlouf wrote that he set up front companies, including Ornina, and others, to “pay some importers who do not want direct relations” with sanctioned regime entities.

“We say to our partners in Cham Holding forgive us, these guys want everything,” he posted on Sunday.

The US and European Union imposed sanctions in 2011 over the regime’s crackdown on mass protests seeking reforms and rights. The sanctions were expanded over war crimes, including the use of chemical weapons and execution, torture, and abuse of tens of thousands of detainees.

Last month the “Caesar Act”, named after the defecting military photographer who brought out photos of the murdered detainees in 2014, extended US sanctions on individuals and companies propping up the regime. Makhlouf’s companies are among them.

Assad’s inner circle are targeting Makhlouf as Syria’s economy, which has lost about 75% of GDP since the uprising began in March 2011, contracts further. Shortages of food, fuel, electricity, and basic supplies are widespread in regime-held areas.