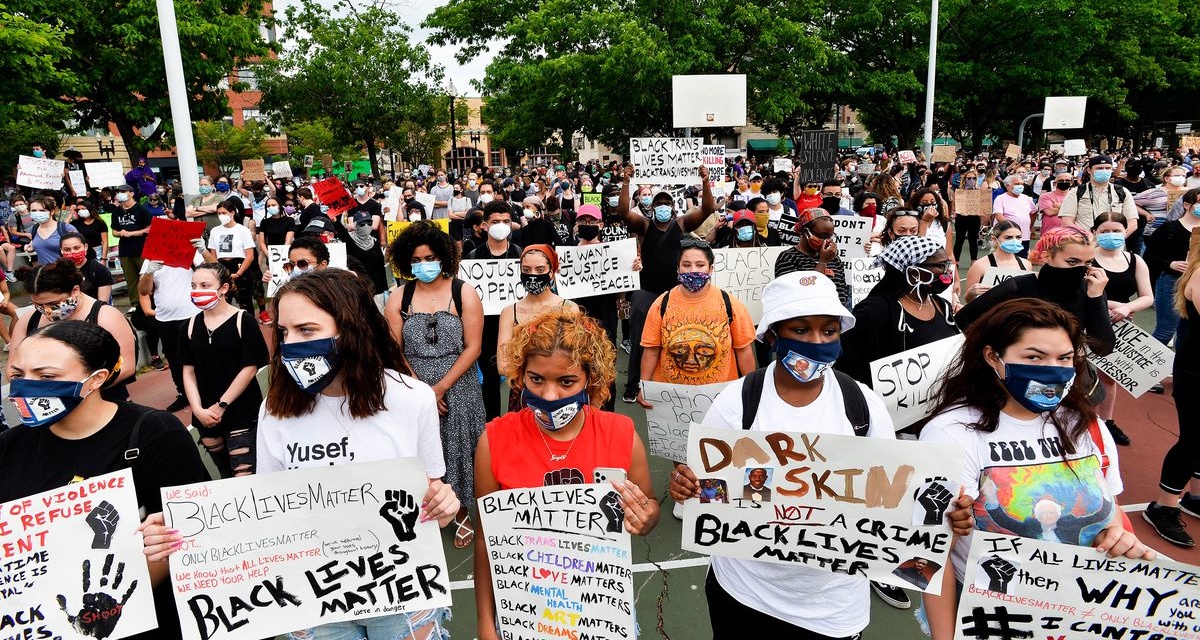 A rally in Boston, Massachusetts, May 29, 2020 (Joseph Prezioso/AFP/Getty)

Donald Trump returns to threats and possible incitement of violence amid protests in at least 48 US cities, sparked by the death of George Floyd at the hands of police in Minnesota.

Trump tweeted on Saturday morning, after demonstrators gathered outside the White House:

….have been greeted with the most vicious dogs, and most ominous weapons, I have ever seen. That’s when people would have been really badly hurt, at least. Many Secret Service agents just waiting for action. “We put the young ones on the front line, sir, they love it, and….

Trump’s message was another shift in his Twitter response to the demonstrations, which began in Minneapolis after Floyd’s death on Monday and then moved across the country from New York to Atlanta to Los Angeles.

See also EA on BBC: Race and the US Protests

On Thursday, he warned “THUGS”: “When the looting starts, the shooting starts,” an echo of a 1967 statement by a Miami, Florida police chief. For the first time, Twitter hid one of Trump’s provocative messages, with the caution that it might provoke violence.

On Friday, Trump backed away with the garbled, disingenous statement that he was merely observing that looting could lead to armed force by police. He made no other significant comment about the protests, abruptly ending a White House appearance without taking questions.

But yesterday he resumed his aggressive posture, making empty declarations that he would bring out the US military even as Minnesota Governor Tim Walz and other state leaders began mobilizing their National Guards.

At one point, he dog-whistled his supporters to confront the demonstrations, “Tonight, I understand, is MAGA NIGHT AT THE WHITE HOUSE???” The tweet was later deleted after drawing criticism.

The death of George Floyd on the streets of Minneapolis was a grave tragedy. It should never have happened. It has filled Americans all over the country with horror, anger, and grief.

“A Nation in Pain”

Crowds and damage diminished in Minneapolis on Saturday night as many people observed a curfew.

But tens of thousands gathered in other cities from the East to West Coasts. Most of the demonstrations were peaceful, but there were clashes in cities such as New York; Philadelphia; Nashville, Tennessee; and near the White House in Washington DC. Three people were shot, one of them fatally, in Indianapolis, Indiana.

Curfews have been ordered in 25 cities across 14 states.

The emotional appeal of rapper Killer Mike for non-violence while protesting over the long-standing issues of violence, discrimination, and inequality.