TrumpWatch, Day 1,226: Trump Goes AWOL as Protests Spread Across US 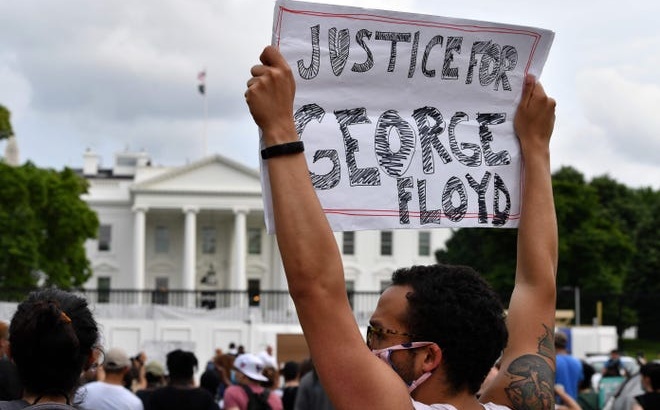 Protests spread across the US after the death of George Floyd at the hands of police in Minnesota, but Donald Trump avoids any discussion of the issue and tries to divert attention to his confrontation with China and the World Health Organization.

There were demonstrations in about 30 cities across the country, including New York City, Atlanta, Boston, Chicago, Dallas, Denver, Las Vegas, Los Angeles, New Orleans. and Washington DC, where the White House was briefly locked down.

In Minneapolis, about 1,000 people marched peacefully along Interstate 35, hours after a curfew went into effect. The protest is now in front of the 5th Precinct police stations, where some demonstrators threw rocks or bottles at officers. About 350 troopers gathered to clear the area and enforce the curfew, ordered earlier in the day by Mayor Jacob Frey.

In Atlanta, people smashed windows of police cars outside CNN Center, where Precinct 5 of the Atlanta Police Department is housed. At least one squad car was set on fire. Police in riot gear pushed protesters back to Centennial Olympic Park.

In New York, police tried to disperse people outside the Barclays Center, some of whom threw water bottles. At least 12 people were arrested.

In Louisville, Kentucky, Police fired volleys of tear gas after hundreds of people gathered. Protests have escalated over the fatal police shooting of a young woman, Breonna Taylor, in her apartment which officers entered while she was asleep. Seven people were injured by a shooting during a Thursday night confrontation.

“I have really been social distancing, I’ve been really serious about it,” said marcher Tiffany Huffman. “But I can’t stay quiet anymore.”

Earlier in the day Derek Chauvin, the Minneapolis police officer who knelt on George Floyd’s neck for almost nine minutes even as Floyd pleaded for his life, was charged with third-degree murder and second-degree manslaughter. Bail was set at $500,000.

Chauvin faces up to 35 years total in prison if convicted. However, Floyd’s family were upset that Chauvin was not charged with first-degree murder and that the other three officers involved in the incident were not arrested.

A CNN crew was released from police custody in Minneapolis after they were arrested during a live broadcast, with correspondent Omar Jimenez placed in handcuffs as filming continued. Minnesota Governor Tim Walz apologized for the detention, and the crew was again working by Friday afternoon.

But Donald Trump, having proclaimed on Thursday, “When the looting starts, the shooting starts”, retreated and soon disappeared over the situation yesterday.

Trump distanced himself from the possible incitement of violence, which led to Twitter hiding his tweets for the first time and putting up a warning message. He claimed that his threat against “THUGS” had been misinterpreted.

At at White House appearance on Friday afternoon, Trump focused on China, whom he is using to divert attention from his mismanagement of the Coronavirus crisis which has now killed 102,836 Americans — and to prop up his campaign for re-election.

He repeated his standard line, underpinning his trade war with Beijing, “They’ve ripped off the United States like no one has ever done before.” He accused China of “espionage to steal our industrial secrets, of which there are many”, announced measures to protect American investors from Chinese financial practices, and declared Beijing was “unlawfully claiming territory in the Pacific Ocean”.

Trump also mentioned China’s crackdown on Hong Kong with a national security law effectively ending the “One Nation, Two Systems” status that was supposed to last until 2047. He said Washington will no longer grant Hong Kong special status on trade, applying the same restrictions placed on Beijing.

Trump did not mention Coronavirus in his statement, but continued his blame campaign against the World Health Organization. He said the US will withdraw from the WHO because China has “total control” of the organization, which is coordinating the international response to the pandemic.

Trump had already ended American funding of more than $400 million to the WHO.

But in a sharp departure from his usual practice, Trump abruptly ended the appearance and refused to take questions from reporters, including over George Floyd, the protests, and the latest situation with the virus.

Trump ended his Twitter day with no mention of the protests, instead launching a political attack on Minnesota’s leadership.