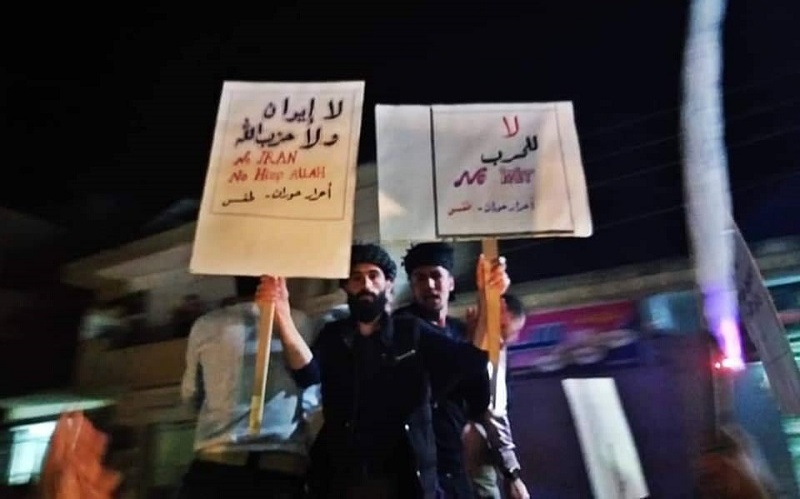 Protesters in Daraa Province in southern Syria call for the withdrawal of Iranian-backed forces, May 13, 2020

Amid rising tension and violence, protests have returned to Daraa Province, the original site of Syria’s March 2011 uprising.

Scores of demonstrators gathered on Wednesday night in Tafas in western Daraa, and in front of the al-Omari Mosque in Daraa city. The protesters challenged the presence of Iran-backed militias and the prospect of new operations by the Assad regime’s military.

The province was overrun by pro-Assad forces, enabled by Russia and Iran, in 2018. However, insurgency has continued: there have been at least 450 attacks since July 2018, including shootings, improvised explosive devices, and motorcycle and car bombs.

In March, regime forces attacked Sanamayn in northern Daraa to oust a group of rebels, transferring the men to northern Syria. However, the assault failed to check the attacks, with at least 31 regime soldiers and militiamen assassinated since then.

See Syria Daily, May 3: More Assassinations of Regime Officers in Daraa in South

In March 2011, regime authorities detained and reportedly abused teenagers who sprayed graffiti on walls in Daraa city. Residents gathered to protest the arrests, but were met by further arrests and attacks from security forces.

Demonstrations soon spread among millions of people throughout Syria.

A Threat of Military Action

Following the killing of nine Internal Security officers in the town of Muzayrib on May 4 —- by a former opposition commander who accused the regime of kidnapping and killing his son and son-in-law — the regime sent military reinforcements to western Daraa.

The Central Committee of Daraa, formed to negotiate final implementation of the Russian-brokered “reconciliation” agreement in summer 2018, condemned the killing of the regime officers and called for prosecutions. At the same time, the committee met with commanders of regime security and military agencies.

A member of the committee told Walid al-Nofal of Syria Direct that the commanders warned, “The decision to storm the area had come from the highest authorities who are quite serious about the military operation.”

He said military reinforcements have also arrived outside Daraa city and in eastern Daraa Province. The troops, including special forces, have heavy weapons.

The source assessed, “The goal of the current military buildup and [upcoming] campaign is to secure additional concessions that favor the regime in implementing the reconciliation agreement.”

He foresaw arrests and attempts to take weapons from former opposition factions, but warned:

The regime reversion to a military solution will neither frighten us nor will it deter us from our demands and rights. In response to the military build-up, we will mobilize our revolutionary capabilities, strengthen our position in the street ,and prepare the people for what is to come.

Civil and tribal activists issued a statement that they “stand united” against “the deployment of the army outside its barracks in order to intimidate, threaten, and provoke further hostility”.

The hateful decisions to implement notorious sectarian agendas, especially by the Iranian militias…will find that their flimsy justifications and arguments will not be able to control the south, destabilize its security, or tears its social fabric by provoking strife and conflict.