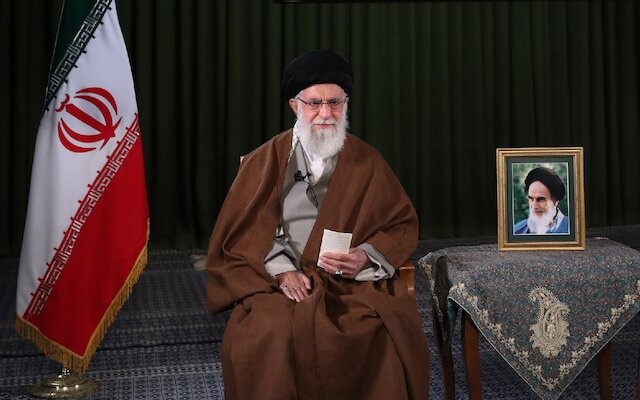 Iran’s Supreme Leader has declared the new Iranian year to be one of “Surge in Production”.

Ayatollah Khamenei displayed his ongoing concern with the Islamic Republic’s economic problems, even amid the outbreak of Coronavirus that officially has a death toll of 1,284 and unofficially may be far higher.

Khamenei belatedly acknowledged the seriousness of the virus, having previously dismissed it as a “Western plot”. He praised health workers who had “achieved martyrdom” while “rendering services to patients”, and those who “rushed to the help of physicians and doctors”.

He declared, “The Iranian nation showed its virtues through these groups and these tasks.”

Then the Supreme Leader turned to his main objective:

Last year’s slogan was “Boosting Production”. This year, I want to say that we need a further surge in production – as the slogan of the year….

If we can move production forward, God willing, economic problems will definitely come to an end and the sanctions that they imposed will prove to be to our advantage.

Since 2012, Khamenei has pursued the objective of self-sufficiency through a “Resistance Economy“, applying it as the label for the 2017-18 Iranian year.

But Iran’s problems have persisted because of long-term internal difficulties as well as comprehensive US sanctions that have led to a fall of between 80% and 95% in oil exports. The Islamic Republic is struggling with production, trade, investment, currency, and employment.

Protests across Iran in November, sparked by a rise of 50% to 200% in petrol prices, were suppressed with security forces killing at least 304 demonstrators, according to Amnesty International.

The Supreme Leader’s New Year speech in the second city of Mashhad was cancelled, as the regime belatedly responded to the virus with the suspension of public events.

Dr Afruz Eslami of the Ministry warned on State TV this week that, even if people begin to cooperate with measures to limit the spread of the virus, there will be 12,000 deaths and 120,000 cases. She said that without cooperation, there will be 300,000 cases and 110,000 deaths, she said.

She added that if Iran’s overstretched medical system collapses, “there will be four million cases, and 3.5 million people will die”.