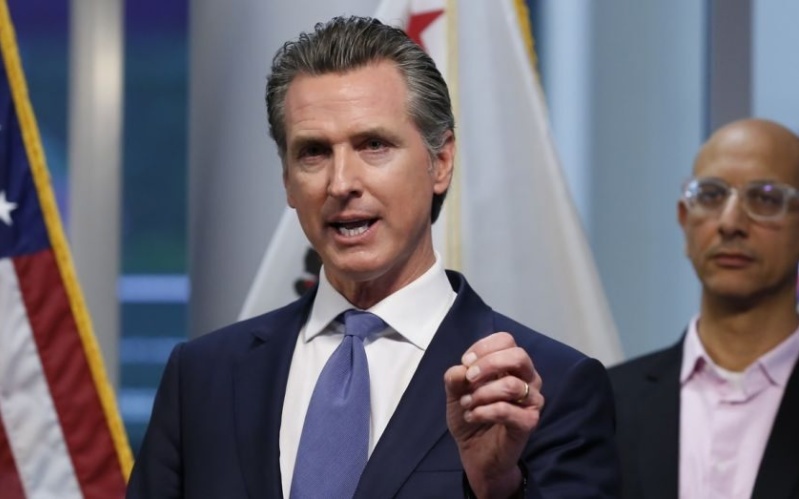 California’s Governor issues a “stay at home” order to contain the spread of Coronavirus, as Donald Trump rants and Senators are revealed to have sold millions of dollars of stock after learning of the outbreak.

Governor Gavin Newsom told 40 million Californians to stay at home except for “absolutely essential” movement, citing a model that 56% of residents could be infected in the next eight weeks.

Newsom summarized, “In the last 24 hours, we had 126 new Covid-19 cases, a 21% increase. In some parts of our state, the case rate is doubling every four days.” He noted that an expected hospitalization rate of 20% is above the capacity of the state system.

I think it’s time I tell you what I tell my family. This is not a permanent state, this is a moment in time. We will look back at these decisions as pivotal.

California Governor Gavin Newsom issued a statewide ‘stay at home’ order directing residents to leave their homes only when necessary during the coronavirus pandemic https://t.co/nfHgMcG1cw pic.twitter.com/W7iHXAVK7L

Earlier in the week, several counties in the San Francisco-Oakland area and the capital Sacramento issued orders that residents shelter in place.

“We need to be painfully honest. We’re about to enter a new way of living in Los Angeles for a period,” Los Angeles Mayor Eric Garcetti told a press conference. “Today is a day that will be seared into the story and the streets of this city.”

The state and local orders grant exceptions for buying groceries or picking up prescriptions.

The number of confirmed US cases surpassed 10,000 on Thursday. Califorhia has 1,030 confirmed cases and 18 deaths.

in Washington, Senate Republicans worked on details of a $1 trillion economic stabilization plan with direct payments to taxpayers and support for businesses.

But Democrats may challenge the package, which puts limits on a House-adopted bill including a paid-leave program. Democratic Senators are also supporting the House’s focus on help for workers and families rather than large corporations.

In his appearance at a daily White House briefing, Donald Trump said he would be open to the Government taking equity stakes in companies that require federal help.

But he abandoning his short-lived pose of somber reflection on the crisis, returning to his blame-first approach against China, Democrats, and the media.

Trump, who denied the seriousness of Coronavirus for weeks, said it was Beijing that “could have stopped [the virus] in its tracks. Unfortunately, they didn’t decide to make it public.”

He complained that, with his insistence on declaring a “Chinese virus”, media were portraying him as “racist” and “siding with China”.

Close up of President @realDonaldTrump notes is seen where he crossed out "Corona" and replaced it with "Chinese" Virus as he speaks with his coronavirus task force today at the White House. #trump #trumpnotes pic.twitter.com/kVw9yrPPeJ

Trump continued his series of falsehoods, saying that the drug chloroquine, used in malaria treatment, had been approved by the Food and Drug Administration to deal with Coronavirus.

The FDA quickly said no approval had been given.

Trump — having tried to protect himself this week with the cover-up, “I always knew it would be a pandemic” — stepped up his effort to divert blame onto the media.

He sneered at outlets like the Wall Street Journal — a publication supportive of Republicans — the New York Times, and the Washington Post, and quipped about the threat of Coronavirus removing his foes in the press.

We should probably get rid of about another 75% or 80% of you….I think that’s a great way of doing it.

You’re sitting much too close. You should leave immediately.

To drive home his point, he closed his conference by taking a planted question from the “One America News Network” to assail both the Chinese and the press:

Wow. A reporter from OANN asks Trump a loaded question about whether reporters criticizing his racism are "siding with foreign state propaganda" and Trump uses it as an opportunity to unload on the media pic.twitter.com/tZR7a6T1N5

Did Senators Profit from “Insider Trading” After Knowledge of Outbreak?

At least four US Senators sold hundreds of thousands of dollars’ worth of stock in major companies from late January, just after learning of the spread of Coronavirus — and as Trump was insisting it was a “hoax” played up by Democrats and the media.

Senator Richard Burr, the Republican chair of the Intelligence Committee, sold $1.7 million of his holdings before a month-long plunge in which the stock market has lost 40% of its value.

Days earlier Burr wrote on the Fox website that the US was “better prepared than ever before” to confront the virus. But two weeks after his sales, he warned the Tar Heel Club of a major disruption from the spread of the illness: “It is much more aggressive in its transmission than anything we have seen in recent history.”

Burr said Coronavirus was “probably more akin to the 1918 pandemic” that killed at least 50 million people.

GOP Sen. Kelly Loeffler and her husband Jeffrey Sprecher — the chairman of the New York Stock Exchange — reported 27 stock sales worth millions of dollars from January 24. Loeffler was briefed that day by White House officials about “the novel coronavirus outbreak”.

And Democratic Sen. Dianne Feinstein and her husband sold $1.5 million to $6 million worth of stock in Allogene Therapeutics, a California-based biotech company, between January 31 and February 18.

A spokesman for Feinstein said she played no role in the decision to sell: “All of Senator Feinstein’s assets are in a blind trust. She has no involvement in her husband’s financial decisions.”