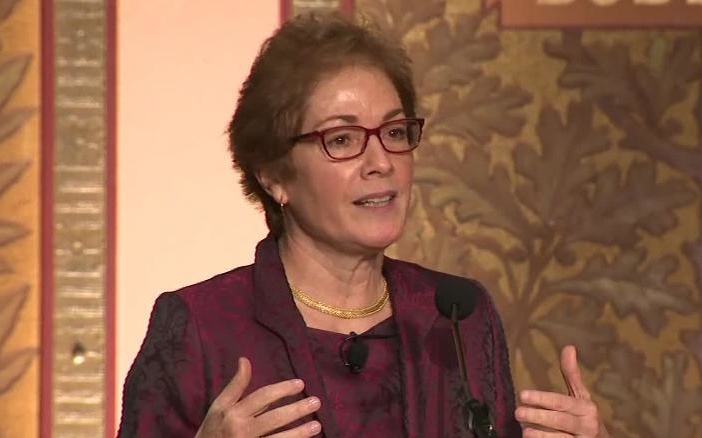 Ambassador Marie Yovanovitch — smeared and driven out by Donald Trump’s pressure campaign on Ukraine to investigate his political rivals — speaks out over Trump’s “amoral” foreign policy.

Yovanovitch said on Wednesday, at an event at Georgetown University, “Right now the State Department is in trouble,” as it is “hollowed out…[by] senior leaders [who] lack policy vision, moral clarity and leadership skills”.

The policy process has been replaced by the decisions emanating from the top with little discussion. Vacancies at all levels go unfilled and officers are increasingly wondering whether it is safe to express concerns about policy, even behind closed doors.

The Ambassador, who has now left the Foreign Service, was seen as a diplomatic leader in anti-corruption efforts. That made her an obstacle to Trump’s personal attorney Rudy Giuliani, as he pursued current and former Ukrainian officials to support Trump’s quest for investigations to tarnish Presidential candidate Joe Biden.

So Giuliani and his associates spread disinformation about Yovanovitch and took their case to Secretary of State Mike Pompeo. The Ambassador was recalled by Trump in late April 2019, after the election of President Volodymyr Zelenskiy.

Three months later, Trump’s call with Zeleskiy seeking the investigations would spark a formal complaint and the impeachment process.

Despite a White House order to defy the House subpoena, Yovanovitch told the Intelligence Committee of the pressure on her and her concern when, in the phone call with Zelenskiy, Trump threatened retribution against her.

Other officials amplified her testimony, speaking of distress that Secretary of State Pompeo had not protected Yovanovitch against the Trump-Giuliani attacks.

Last month Pompeo cursed and tried to humiliate National Public Radio’s Mary Louise Kelly when she asked him about the incident.

Speaking of the need for “a coherent foreign policy…principled, consistent, and trustworthy,” Yovanovitch told the Georgetown audience:

We need to re-empower our diplomats to do their job. We can’t be afraid to share our expertise or challenge false assumptions. Working off of facts is not the trademark of the deep state but of the deeply committed state….Truth matters.

Far from pulling back after the Ukraine affair, Trump is exacting retribution after Republican senators protected him from conviction on the impeachment charges of abuse of power and obstruction of Congress. On Friday, two days after his trial ended, he dismissed US Ambassador Gordon Sondland — a central figure in the Trump-Giuliani campaign — and the National Security Council’s Lt. Col. Alexander Vindman, ordering security guards to evict Vindman from the White House and slandering the decorated war veteran on Twitter.

Like Yovanovitch, both men defied White House orders to give testimony to the House Intelligence Committee.

The Ambassador continued her criticism of Trump’s unsettling actions and announcements, disrupting long-standing US partnerships:

To be blunt: An amoral, keep-’em-guessing foreign policy that substitutes threats, fear and confusion for trust cannot work over the long haul, especially in our social media-savvy, interconnected world.

At some point, the once-unthinkable will become the soon-inevitable: that our allies, who have as much right to act in their own self-interest as we do, will seek out more reliable partners, partners whose interests might not align well with ours.