TrumpWatch, Day 1,030: As US Ambassador Testifies of Trump Intimidation, Trump Tries to Intimidate Her Via Twitter 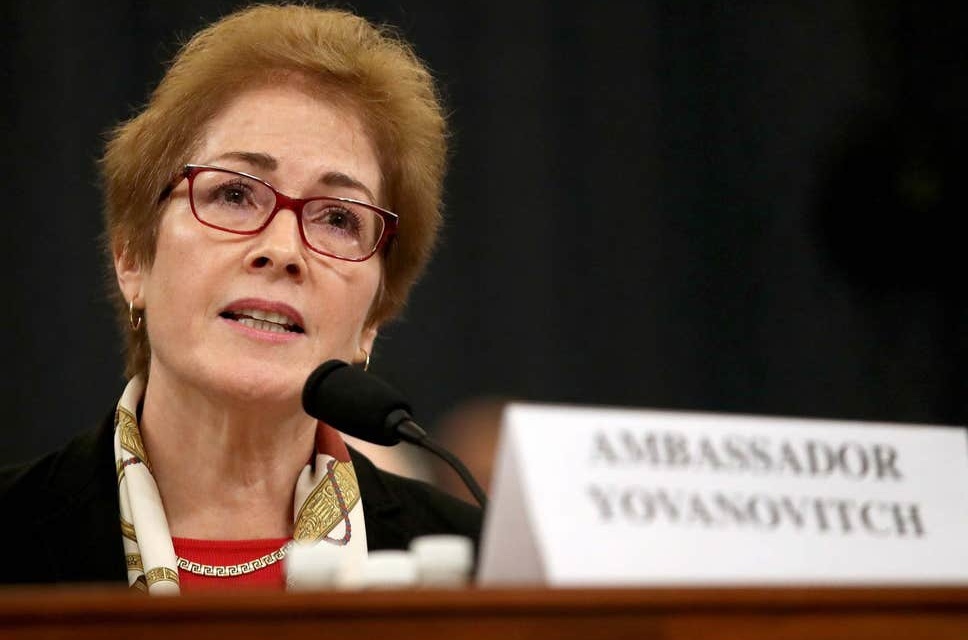 The former US Ambassador to Ukraine, Marie Yovanovitch, tells the House impeachment inquiry of Donald Trump’s attempts to intimidate her, amid a campaign by Trump and his attorney Rudy Giuliani for Kiev’s investigations of political rivals such as Presidential candidate Joe Biden.

Yovanovitch, who testified in a closed-door session last month, further detailed the campaign from last November, which also sought investigations to cover up Russia’s interference in the 2016 US election. She spoke of being “threatened” by Trump, and feeling “shocked, appalled, devastated” that he insulted and warned of action against her in a July 25 call with Ukrainian President Volodymyr Zelenskiy.

Far from rebutting the testimony, Trump reinforced it by attacking Yovanovitch via Twitter as the Ambassador spoke.

Everywhere Marie Yovanovitch went turned bad. She started off in Somalia, how did that go? Then fast forward to Ukraine, where the new Ukrainian President spoke unfavorably about her in my second phone call with him. It is a U.S. President’s absolute right to appoint ambassadors.

But Trump’s attempt appeared to backfire. Democrats on the House Intelligence Committee warned that witness intimidation could be added to the impeachment charges. Yovanovitch’s deeply personal testimony brought a spontaneous standing ovation from spectators.

And the episode reinforced the Ambassador’s account of the Giuliani campaign, involving the Trump attorney’s now-indicted business associates and including a disinformation effort to remove Yovanovitch as an obstacle to their efforts.

The Ambassador was recalled in May by Trump, weeks before he froze military aid to Ukraine and called Zelenskiy to ask for the investigations.

For more than five hours, she set out the extent of the Trump-Giuliani effort.

Perhaps it was not surprising that when our anti-corruption efforts got in the way of the desire for profit or power, Ukrainians who preferred to play by the old, corrupt rules sought to remove me.

What continues to amaze me is that they found Americans willing to partner with them and, working together, they apparently succeeded in orchestrating the removal of the U.S. ambassador.

How could our system fail like this? How is it that foreign corrupt interests could manipulate our government?

Republican attempted to claim that Yovanovitch had no first-hand evidence of wrongdoing and to belittle her removal as an “employment disagreement”.

But she calmly responded, “I do wonder why it was necessary to smear my reputation.”

She described reading the transcript of the July 25 call, where Trump told Zelenskiy that she was “bad news” and going to “go through some things”.

She said the color drained from her face:

I was shocked, appalled, devastated that the President of the United States would talk about any ambassador like that to a foreign head of state — and it was me. I mean, I couldn’t believe it.

The headline moment was when Committee chair Rep. Adam Schiff interrupted his counsel’s questioning to read the Trump tweet assault on Yovanovitch. Members of the audience gasped.

Asked for her reaction, she said, “It’s very intimidating.

Democrats have already said that in addition to the charge of bribery, Trump may be accused of obstruction of justice, because of White House orders to official to defy suppoenas for testimony and documents.

Trump insisted to reporters, “I want freedom of speech.”

Meanwhile, more evidence accumulated over Trump’s linkage of military aid — and a White House visit by the newly-inaugurated Zelenskiy — to a Kiev statement to tarnish Biden and the Democrats.

David Holmes, an official at the US Embassy in Ukraine, told investigators in a closed-door interview that he overheard a call on July 26 between Trump and Ambassador Gordon Sondland in which Trump — by mobile phone over an unsecured line — loudly asked about the status of the investigations.

Holmes said Sondland, the US envoy to the European Union, responded to Trump that Zelenskiy “loves your ass” and would conduct the investigations and do “anything you ask him to”, according to “three people familiar with the closed-door session”.

Holmes confirmed Wednesday’s testimony of William Taylor, the US chargé d’affaires in Kiev, of Sondland’s remark that “President Trump cares more about the investigations of Biden, which Giuliani was pressing for”, than he did about Ukraine.

A second official at the Kiev Embassy, Suriya Janati, has said she was also at the restaurant and overheard the Trump call to Sondland, a political appointee and central figure in the Trump-Giuliani “irregular channel” for foreign policy.

She is likely to give a deposition, while Sondland is scheduled to testify in next Wednesday’s public hearing.