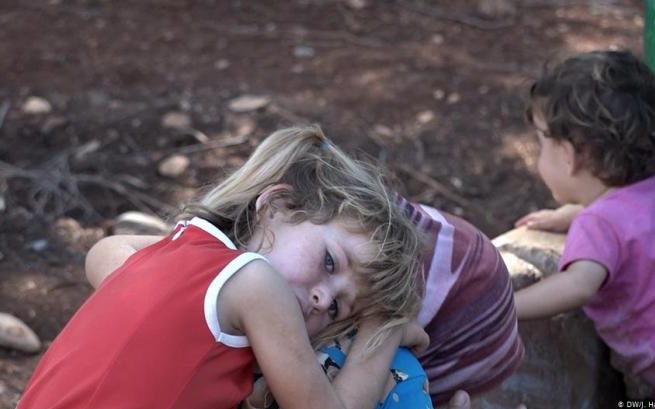 A young girl among the more than 1 million displaced civilians in Idlib Province in northwest Syria (J.Hahn/DW)

Bente Scheller writes for Qantara, with translation by Nina Coon:

The UN’s emergency relief coordinator Mark Lowcock warns against the “biggest humanitarian horror story of the 21st century” in the Syrian Province of Idlib. Within just two months, the military offensive of the Syrian regime and its allies force more than 900,000 civilians to flee. And for 2 million to 3 million people, there is no way out, as Turkey maintaining its closed-border policy.

If powerful members of the UN Security Council continue to put their own interests above humanity, Idlib will become “the world’s biggest pile of rubble strewn, with the corpses of a million children”, in Lowcock’s description.

Half of the up to 3 million people in Idlib are displaced from other parts of the country. There are no more tents on the border, leaving many families exposed to the elements in sub-zero temperatures. The image of 1 1/2 year-old Laila, frozen in her father’s arms on the way to hospital, has become a symbol of the desperate situation.

Whether in the case of eastern Aleppo city in December 2016, the reoccupation of Daraa in southern Syria, or the agonizing months of the offensive against the Ghouta region near Damascus, the Syrian regime has repeatedly violated international law on a massive scale and shown no regard for human rights. In Idlib, it has attacked people on the run and in refugee camps, which prompted the UN to declare that nowhere is safe.

There was always one more way out from all the other enclaves: to be deported to Idlib. But from Idlib itself, there is nowhere left to go.

Even if the people survive the attacks, this does not mean they are secure. In territories recaptured by the regime, its officials and troops interrogate, pursue, and arrest not only militant opponent but also those who have worked to uphold civilian life in rebel-held areas.

So despite the most hostile conditions, the fearful inhabitants of Idlib continue to hold out and hope for a miracle.

The only way to prevent the worst from happening would be a ceasefire. Theoretically this is already in place – since Russia, Turkey and Iran agreed on Idlib as one of four “de-escalation zones” in May 2017. But what initially functioned as a constructive proposal to alleviate the suffering of the civilian population quickly revealed itself to be part of a military strategy allowing the Assad regime to concentrate its forces on one front at a time, thus recapturing one opposition area after another.

As far as Turkey was concerned, Idlib was more important than the other areas. Because of the proximity to the border, Ankara viewed “Zone 1” as a security buffer separating it from the regime and preventing further refugees from entering Turkey. But the 12 observation posts set up by Ankara as guardposts along the “Sochi Line” have been circumvented and besieged by the regime. It was always clear that it was only a matter of time before Idlib would come under attack.

The Erdoğan Government’s problem is that the military offensive in Idlib is not only being advanced by the Syrian regime, but also by Russia. In a confrontation with Russia, Ankara cannot bank on support from western states: not only has Turkey distanced itself from the European Union and NATO but Western powers have also gone down the appeasement route over Russian intervention in Syria.

Despite the massive reinforcements sent to Idlib by the Turkish military, questions hang over what happens after the expiry of Turkish President Recep Tayyip Erdoğan ’s ultimatum for a withdrawal of regime forces from Idlib at the end of February.

Turkey is subtly turning up the heat on Assad by changing the way it co-operates with the rebels. Many more high-ranking members of the Syrian military are being killed, suggesting that the rebels have access to more reliable information and weapons fro Ankara. Two Syrian regime helicopters have been shot down using MANPADs – the portable anti-aircraft missiles which Turkey could be supplying.

Helicopters enjoy a particular status in the warfare of the regime, because they are the only means to drop barrel bombs. Since August 2012, Assad’s forces have dropped more than 70,000 of these improvised explosive devices, reducing neighborhoods and villages to rubble. They are especially destructive and cannot be guided, which means most of their victims have been civilians.

The downing of the two helicopters shows that it could have been possible to deter the regime earlier in the conflict, saving hundreds of thousands of lives.

But now Russia is determined to pave the way for regime occupation, intensifying its aerial bombardments. With targeted strikes on hospitals and other health facilities, Assad and his allies are preventing treatment of the sick and injured and de-populating entire swathes of land at an unprecedented rate.

“In many places captured by the regime in recent days, there is no evident strategic interest,” says Chatham House fellow Haid Haid. “The regime captures them because it can, because if the people have already fled the air strikes, it can take the deserted places without a fight.”

He perceives Russia’s unconditional support of the regime as a tactical change: thus far, Russia only ever allowed the regime to make very limited progress before calling a halt, he says. But now it is smoothing the way for the Syrian army to capture as much territory as possible.

The more dramatic the situation becomes, the more clout Russia wields in Geneva. With its air support, Russia is yet again able to show the world that it is determined to go all the way, says Haid.

Russia’s advantage is that it does not need an overarching strategy with its unfettered diplomatic support for the regime. No one is expecting Moscow to come up with a peace plan, so it can proceed with minimal concessions.

The Horror to Come

The situation is far different for neighboring Turkey. President Erdoğan has repeatedly said he will use refugees from Syria as leverage against Europe. However, these refugees would need to enter Turkey first and only a fraction of them would be in a position to continue their travel.

“Turkish border patrols shoot people every day as they try to cross the border — this is barely being reported. Even Syrian organisations are saying very little about it because most of them are in Turkey,” says Haid Haid.

Essentially, the escalation of violence in Idlib is a result of tensions between Turkey and Russia. Moscow has made some negotiated compromises — for example, in the UN Security Council, the Russians blockied aid shipments via Iraq and Jordan but not from Turkey — but Erdoğan has not dissuaded Putin from persisting with the offensive.

The victims are the civilians in Idlib, caught up in a hopeless situation amid the spectrum of differing interests.

Assad has declared several times that he will recapture “every centimeter of Syrian territory”. He wants the country, but not the people. This is why it is part of his strategy to cause the greatest possible suffering to be rid of as many potential rebels as possible and deter returnees. That destructive approach is paying off, as images of the “humanitarian corridor” show — despite the horrific conditions in Idlib, no one is fleeing to regime-held areas.

The regime has already captured around a third of Idlib. Even though it is conceivable that Turkey might accept a smaller territory as “security zone”: a minimum of local infrastructure would be necessary to supply this. That infrastructure is disappearing with every takeover of a town or city by the regime.

Assad and his inner circle do not care what happens to these people. They have not been called to account for any of its crimes, from the deployment of chemical weapons through to thousands of deaths by torture in detention. The Russian support of his actions in Idlib means Assad has nothing to fear over the ongoing campaign.

Moscow and Iran are unperturbed by hundreds of thousands of dead, particularly as the timing could not be better. the global public is weary of the war and the unsettling news from Syria. For a long time, politicians have had little ambition to grind themselves down on the intransigence of the despots. Europe could not be less keen to get involved at this point in time.

The current horrors only provide a foretaste of what the inhabitants of Idlib can expect following Assad’s victory.
If the United Nations and European nations cannot protect the people in Syria, the only other logical consequence would be to facilitate their escape to safety. But thus far, no country has expressed a willingness to accept refugees.

European governments shy away from action to counter Russia’s aggressive policy in the region, while at the same time allowing themselves to be cowed by emboldened right-wing anti-refugee movements to such an extent that they lack the courage to make broad humanitarian gestures.

Even though this is what is needed right now.