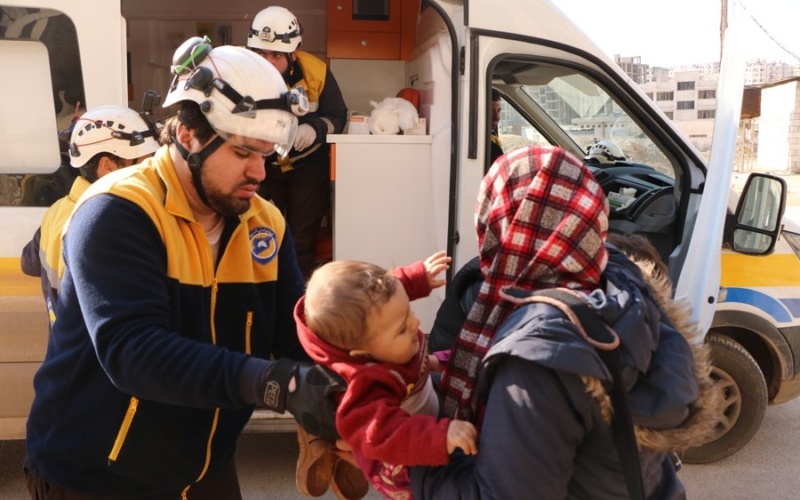 Woman hands her child to a White Helmets rescuer after Russia-regime bombing of schools and shelters in Idlib Province, northwest Syria, February 25, 2020

Russia and the Assad regime resumed their bombing of civilian areas in Idlib Province in northwest Syria on Tuesday, killing 21 people.

Moscow had stepped back from the attacks amid an escalation of warnings from Turkish President Recep Tayyip Erdoğan and the first appearance of Ankara’s troops on the Idlib frontline.

But reinforcing its rejection of Erdoğan’s calls for a ceasefire and a withdrawal of Assad regime forces by February 29, Russia returned to an assault which has killed more than 1,800 civilians, wounded thousands, and displaced more than a million in the greater Idlib area since last April.

White Helmets rescuers said 11 civilians, including seven children, were killed in the rubble of a school in Ma’arat Misrin. Another 44, including 12 children and 12 women, were rescued from the school, which was being used as a shelter.

Four civilians, including a child and two women, were killed in residential neighborhoods in Binnish. Another 12, including six children and three women, were wounded.

Four schools and two kindergartens were struck in Idlib city, killing three teachers and a student.

There is no safe place even for children in northern #Syria. 8 schools have been targeted since the morning so far in #Idlib with cluster bombs and airstrikes. 10 people have been killed so far, while #WhiteHelmets search and rescue operations continue. pic.twitter.com/fUfpnQ7Y9n

8 schools and kindergartens were deliberately targeted today by the regime’s warplanes and rockets loaded with cluster bombs. 21 people were killed, including teachers. Are school children and teachers the threat the regime and Russia must rid #Syria of?! pic.twitter.com/8m6jdOTGlo

The Russian-regime offensive has shattered a “de-escalation zone”, declared by Moscow and Ankara in September 2018, around Idlib and northern Hama Province.

A ring of 12 Turkish observation posts were surrounded and rendered ineffective as the offensive seized almost of northern Hama and parts of southern Idlib. Turkey, which hosts more than 3.6 million refugees, faced the pressure of the more than 1 million displaced who are trapped between the Russia-regime attacks and a Turkish border closed in 2016.

In late January Turkey’s Erdoğan, mentioning Russia for the first time, said the offensive must be halted. Ankara sent convoys to the observation posts and delivered weapons and equipment to anti-Assad forces.

Last Thursday, Turkish infantry joined rebels for the first time in an attack on Nayrab, between Idlib city and the key town of Saraqeb — seized by the Russian-regime offensive days after Erdoğan’s first warning. On Monday, the town was reclaimed by anti-Assad forces.

But in two sets of talks, Russian officials have held off the requests of Turkish counterparts for a ceasefire, including joint control of airspace and patrols on the ground. On Friday, President Vladimir Putin made no commitment — even for a meeting in early March — during a phone call with Erdoğan.

The Turkish President said on Tuesday that a Russia delegation will arrive in Ankara today for discussions; however, he acknowledged “no consensus” for a meeting with Putin, German Chancellor Angela Merkel, and French President Emmanuel Macron.

In contrast to their recent highlighting of the Russian-regime attacks and the humanitarian crisis in Idlib, Turkish media make little reference to Tuesday’s killings.

Russia State English-language media do not mention Idlib, let alone the bombing of civilians, this morning.