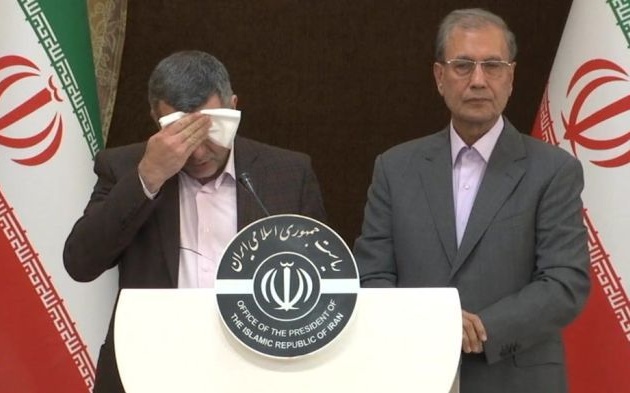 Iran Deputy Health Minister Iraj Harirchi at a press conference on Monday, a day before he announced he has contracted Coronavirus

Amid Iran’s rising toll of dead and infected in Iran, President Hassan Rouhani has said fear of Coronavirus is an “enemy conspiracy”.

Rouhani told the newly-established National Headquarters for Fighting Coronavirus on Tuesday that there should be no restrictive measures such as quarantine, despite an official toll of 16 dead and 95 infected — and unofficial claims that the actual figure is far higher.

The President said, “From Saturday, activities across the country must continue like previous weeks. Spreading fear and attempting to halt the country’s activities is the enemies’ conspiracy.”

But Rouhani’s portrayal, echoing the Supreme Leader, of a Western plot was dramatically undercut by the revelation of Deputy Health Minister Iraj Harirchi that he has contracted the virus.

On Monday, Harirchi insisted at a press conference that a death toll of 50, first circulated by a Conservative MP from the holy city of Qom, was fabricated. He said that he would resign if the actual figure was only a quarter of that.

However, observers noted that Harirchi appeared ill and was mopping his brow as he stood by a Government spokesman. Less than 24 hours later — having been at a public event where the virus could spread and later giving an interview in a State TV studio — the minister announced in a video that he is among the sick.

The reformist MP said he feared that, already suffering from lung damage from the Iran-Iraq War of the 1980s, “I have very little hope to survive.”

Sadeqi has been notable in recent months for his challenges to corruption and the regime’s deadly suppression of mass protests. He was barred by the Guardian Council from standing in this month’s Parliamentary elections.

Health Ministry spokesman Kianoush Jahanpour rejected the request, “We have not had any particular report that would raise concerns about the contagion in prisons.”

Meanwhile, Rouhani defied the rising toll and public concern, telling the emergency committee, “The virus is being controlled and number of people going to hospitals has reduced dramatically.”

He compared Coronavirus to flu for his assurance, “A few months ago when Influenza Type B was threatening our society, then worked hard and controlled the virus, and now we are sure that these personnel will control the situation in the shortest time possible”.

While saying people in public places “should pay attention to health recommendations”, he insisted, “We must all continue our work and activities, because it is one of the enemies’ plots to spread fear in our country and close down the country.”

The regime’s denial of a crisis was set out on Sunday by the Supreme Leader, who asserted that coronavirus was a Western plot to limit participation in last Friday’s Parliamentary elections.

After acknowledging a record-low turnout of 42.5% in the vote — and after conservative Ahmad Amirabadi Farahani said there were 50 dead and 250 quarantined in Qom, let alone the rest of Iran — officials began acknowledging the spread of the virus. But they tried to shift blame to the US and to the Islamic Republic’s seven neighbors, all of whom have barred entry from Iran or imposed severe restrictions on movement.

Echoing Rouhani, Revolutionary Guards commander Gholamreza Jalali, the head of the “Passive Defense Organization”, said, “Our containment means that in the coming weeks we will see a decrease in the number of patients and a decrease in the spread of the virus.”

He said that the real problem was the failure “to reach a general consensus” accepting the regime’s announcements, “largely due to the deliberate planning of counter-revolutionary media and their media outlets”.

The Supreme Leader’s top aide, Ali Akbar Velayati, proclaimed, “Given the measures being taken to control the disease, we will have better news in the coming days and there is no reason for concern….The disease will be contained.”

But even as he gave the assurance, Velayati undermined the regime’s line: he said there were 104 suspected Coronavirus cases at Tehran’s Masih Daneshvari Hospital, a figure higher than the entire national total being put out by other officials.