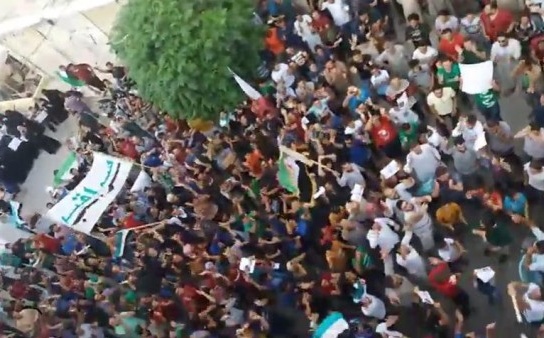 Turkish-backed rebels have recaptured the strategic town of Saraqeb in Idlib Province in northwest Syria.

Syrian National Army forces moved into the town, on the junction of the Damascus-to-Aleppo M5 and cross-Idlib M4 highways, on Monday morning.

Russia and the Assad regime, pursuing their 10-month offensive, had seized Saraqib on February 3. The advance came days after Turkish President Recep Tayyip Erdoğan, criticizing Moscow by name for the first time, promised military intervention and gave pro-Assad forces a deadline of February 29 to withdraw from Idlib.

Ankara stepped up supplies of weapons to the SNA, and Turkish infantry appeared on the frontline last week as rebels reclaimed Nayrab, between Saraqeb and Idlib city.

The capture of Saraqeb poses Erdoğan’s most serious challenge to date to Russia.

But the Russian-regime officials, launched in late April, shattered a “de-escalation zone” around Idlib and northern Hama Provinces. The area, with 12 Turkish observation posts, was declared by Erdoğan and Putin in September 2018.

The offensive has killed almost 2,000 civilians, wounded thousands, and driven more than 1 million from their homes. The displaced, many without shelter in winter conditions, are gathering near a Turkish border closed in 2016.

Seizing almost all of northern Hama and part of southern Idlib, the assault surrounded and rendered ineffective the Turkish observation posts.

Erdoğan pledged last week, “The Idlib operation is a matter of time. Turkey will not leave Idlib to the Assad regime and its backers, who have not comprehended the determination of our country regarding this matter.”

But two sets of meetings between Russian and Turkish officials brought no compromise, and Putin rejected Erdoğan’s call for a ceasefire and the withdrawal of the pro-Assad forces. The Russian President also held out against a summit also including German Chancellor Angela Merkel and French President Emmanuel Macron.

Russian State outlet TASS features the assertion of an Assad regime military source: “Militants’ attacks against the city of Saraqib have been successfully repelled by Syrian government troops. The city is fully controlled by the Syrian government.”