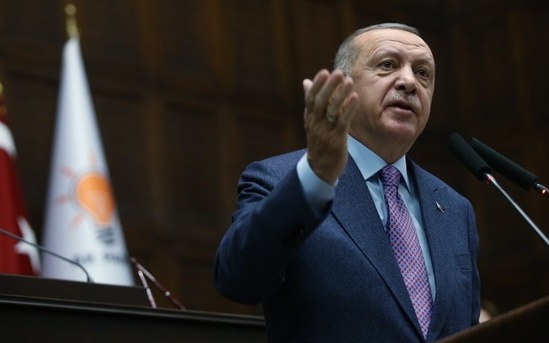 Turkish President Recep Tayyip Erdoğan has taken another step towards a military confrontation with Russia and the Assad regime in Idlib Province in northwest Syria.

Erdoğan’s escalation of rhetoric, which began three weeks ago, continued on Wednesday with a speech to his ruling Justice and Development Party in Ankara.

Speaking of the 10-month Russia-regime offensive which has killed more than 1,800 civilians and displaced more than a million in the northwest, Erdoğan warned not only the Assad regime but also Russia and Iran, “Frankly speaking, the Idlib operation is a matter of time. Turkey will not leave Idlib to the Assad regime and its backers, who have not comprehended the determination of our country regarding this matter.”

But Erdoğan said that Ankara, whose 12 observation posts have been surrounded and occasionally shelled, will no longer tolerate the attacks: “Like our previous operations, we say our operation may happen suddenly one night….We are determined at all costs to turn Idlib into a safe haven for the sake of Turkey and the people of the region.”

The Turkish President is concerned about the pressure from the displaced, driven from their homes by Russian-regime ground and air attacks. Turkey, which hosts 3.6 million Syrian refugees, closed its border in 2016.

He repeated a deadline of February 28 for the Assad regime to withdraw from Idlib: “There are few days left (according to the deadline given by Turkey) for the regime to stop its aggression in Idlib and retreat to the areas determined by the Sochi deal [the de-escalation zone]. These are our last warnings.”

The Turkish President’s statement fulfilled a projection by a well-placed local analyst, given to EA WorldView on Monday:

This time I think that just because Turkey can’t take in more refugees, it will threaten Russia to a point they will call Putin’s bluff.

Bullying works only as long as the bullied party has ways to retreat. This time Turkey has no other choice than to confront Russia if [Russian President Vladimir] Putin continues.

Erdoğan first named Russia in his criticism at the end of January, just before Moscow and the regime seized the key town of Saraqeb on the junction of the M4 and M5 highways in Idlib.

Since then, the Turkish military has sent convoys to reinforce the observation posts and retaliated for regime shelled that killed 13 Turkish troops and a civilian contractor.

Turkey has not appeared on the frontline; however, Ankara’s covert supplies of weapons and ammunition have bolstered anti-Assad forces in their resistance to the offensive.

Having taken control of the M5 highway from Aleppo to Damascus, the Russian-regime advance has stopped. Instead, the attacks have concentrated on seizing territory in neighboring western Aleppo Province.

Two sets of meetings between Turkish and Russian officials in the last two weeks have ended in division and tension.

Erdoğan said yesterday that there had been no favorable results, and while discussions will continue, the two countries are “miles away” from a resolution.

The Kremlin tried to play down any possibility of a confrontation.

Kremlin spokesman Dmitry Peskov said, “If we talk about an operation against legitimate Syrian authorities and armed forces, it is of course a worst-case scenario.”