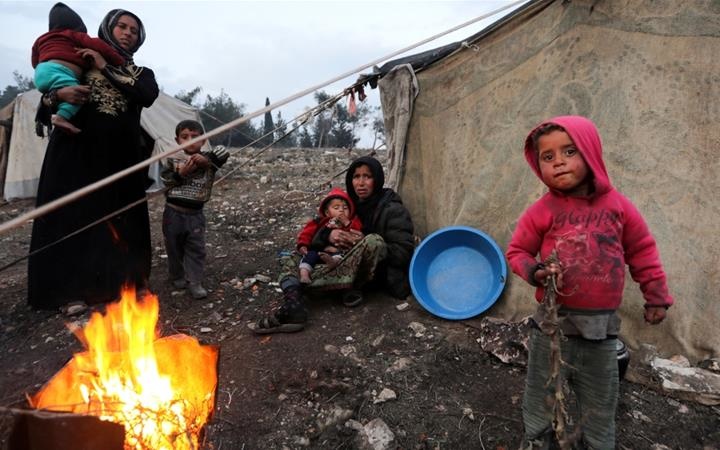 After more than nine months of a deadly Russia-regime offensive in northwest Syria, international media outlets are taking notice of the scale of the crisis for a million displaced civilians in Idlib Province.

The offensive, launched last April and shattering a Russian-Turkish “de-escalation zone” around Idlib and northern Hama Provinces, has killed more than 1,500 civilians and injured hundreds of thousands. It was paused in early September by Russian President Vladimir Putin, but the ground and air attacks resumed in November, displacing almost 600,000 since then.

In the past two weeks, Turkish President Recep Tayyip Erdoğan has finally criticized Russia by name and called for the withdrawal of pro-Assad forces from Idlib. However, the attacks have continued, with the Russian-regime force seizing the key town of Saraqeb — 15 km (9 miles) southeast of Idlib city — last week.

Amid the latest assault, expanding Russian-regime seizure of northern Hama and parts of southern Idlib, another 200,000 people were forced from their homes between January 26 and February 2.

A Russian delegation, led by Deputy Foreign Minister Sergey Vershinin and the Kremlin’s special envoy on Syria Alexander Lavrentyev, held talks in Ankara on Saturday with Turkish counterparts. There was little detail on the discusisons, with the note that they will resume in “upcoming weeks”.

The greater Idlib area has about 3 million people, 20% of the remaining population of Syria. The displaced are trapped at the border with Turkey, which stopped entry in 2016 after taking 3.6 million Syrian refugees.

Obaida Dandoush of Syria Relief and Development tells Al Jazeera, “The situation is 20 times worse than what it was last year. And over the span of last year, we had 1.2 million people displaced [in northwest Syria].”

With Russia and the Assad regime trying to block cross-border aid, including Moscow’s veto of a UN Security Council resolution in December, aid workers are struggling to cope with the emergency. There are shortages of food and clean water, medicine, warm clothes, fuel, and tents.

Habib Khashouf, a member of the doctors’ union in Idlib province, explained that many displaced are sleeping in the open without shelter.

“Sara”, a 38-year-old widow and mother of five, fled from Saraqeb. Her family was without shelter in Aqrabat, a village surrounded by refugee camps on the Syrian-Turkish border: “I just put some mats over the mud under a tree and that was where were going to sleep.”

They are now with her sister’s family in two bare rooms with 20 people, struggling to pay rent and buy food and cooking gas amid soaring prices.

“I keep going only for the sake of my children. The situation is so bad, it is like Judgement Day,” she says.

“Until Our Last Breath”

In Idlib city, Fahad Aswad is working — sometimes around-the-clock for up to two days — as an anaesthetist at a maternity and pediatric hospital. The staff operate beneath the south of warplanes.

He tells The New Arab, “We will continue to work until our last breath. If Bashar al-Assad’s forces decide to storm the city, we will be displaced to the camps.”

Idlib city and most of the province were captured in spring 2015 by anti-Assad forces. The advance, combined with anti-Assad victories in the south, brought the regime to the point of collapse. Then Russia’s military intervention from September 2015 saved Bashar al-Assad and — with Moscow taking over the political process and pushing aside the US and the international community — began the erosion of opposition territory.

Now, with no sign of international intervention and Turkey debating its next steps, those in Idlib city try to hang on.

Afaf Jakmour, a 29-year-old journalist, says that she and her family have to prepare to drive north towards the border: “If the regime storms the area, I will definitely leave. But I plan to stay until the last minute.”

Amid the destruction, fear, and sorrow, there are the acts of kindness.

Kids Paradise, a humanitarian operation initially established to provide education and activities for displaced children, was forced to relocate from the Ma’arat al-Nu’man area in December when the Russia-regime forces devastated and moved into the “ghost city”.

The organization helped with the evacuation of tens of thousands of civilians in the final days before the occupation. It has faced further challenges with the restrictions on UN and other international assistance.

But the aid workers persist. On Sunday, they posted news — and a bit of cheer — from the camps.

we are still providing families with winterization supplies to keep Syrian families warm.
Icy nights are a nightmare that follows Syrian children who are not able to find warm shelter.
Keep us providing more
stand with themhttps://t.co/W5QGbho3Qn pic.twitter.com/pF29yQC49o