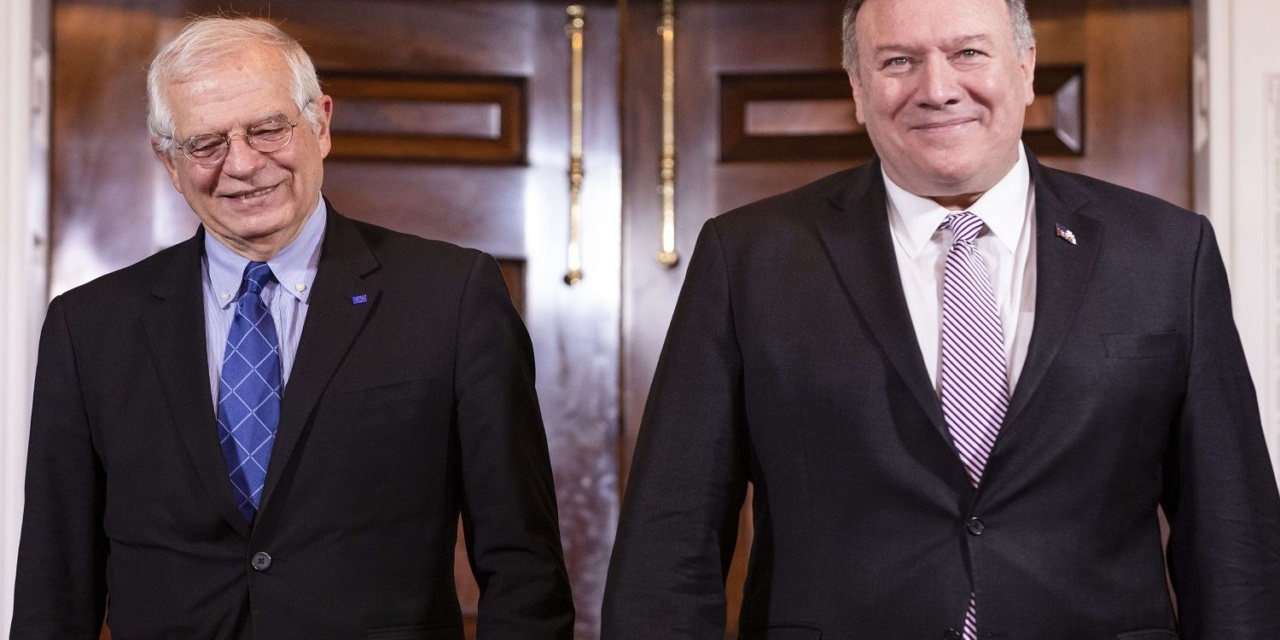 The European Union’s top diplomat has told the Trump Administration, “We are not foes” — but Josep Borrell has also drawn a line on key issues such as climate change, Iran, and the Middle East.

In his first visit to Washington as the EU’s foreign policy head, Borrell met with Secretary of State Mike Pompeo on Friday and was interviewed by The Washington Post.

The trip comes against the backdrop of Donald Trump’s animosity towards the EU. Soon after he took office, Trump tried to appoint an Ambassador to the EU, Ted Malloch, who wanted to break up the bloc. Malloch’s nomination was withdrawn after the revelation of his false claims over his qualifications and finances;, but Trump backed the UK’s Brexit departure from the EU as a way to weaken the remaining 27 members.

Trump has also imposed tariffs on EU products such as steel and aluminum, threatened duties on automobiles, and repeatedly criticized NATO, raising the prospect of American withdrawal.

Borrell noted that “the list is long of things” from Trump’s inner circle that could be read as “not very friendly”.

He quickly assured, “There are the things they say, and then the way things are. We are not foes. We share common values.” But the diplomat was not deterred from setting out EU positions that diverged from the Administration’s.

The Spanish politician defied Trump’s climate change denial and withdrawal of the US from the Paris Accords. Hailing Europe as “taking the lead on climate change”, he called for faster, wider measures to combat emissions — a marked contrast from Trump’s rollback of US regulations and command to California to withdraw its limits on automobiles.

“That’s why we aren’t happy when President Trump goes to Davos” and discounts climate change, Borrell said. “[This is one of the most important things we can deal with.”

Important discussion with @SpeakerPelosi on EU-US partnership and transatlantic relations. Based on shared values and mutual trust we can succeed in tackling global challenges we jointly face. pic.twitter.com/SJE1laI7GY

Iran and the Middle East

Borrell sharply rebuffed Trump’s withdrawal of the US from the July 2015 nuclear deal between Iran and the 5+1 Powers (US, UK, France, China, Germany, and Russia), followed by comprehensive American sanctions on Tehran in November 2018.

Without the deal, Iran would for sure be a nuclear power….[We should] try to keep the deal alive and go back to full compliance for everyone.

Borrell’s position moves Europe close to the statements of Iranian leaders, including President Hassan Rouhani, that they will return to the negotiating table if the US lifts sanctions. At the same time, it maintains the European focus on inspections of Iran’s nuclear program and consideration of Tehran’s missile research and development.

“This deal is not just a nuclear deal. It’s nuclear on one side and economic on the other side,” he summarized. Then he warned that if Europe does not succeed, “the deal will die for sure”.

Borrell, who also spoke with Trump’s son-in-law Jared Kushner and National Security Advisor Robert O’Brien, poured cold water on Kushner’s “deal of the century” between Israel and Palestine, unveiled earlier this month by the Administration.

While welcoming any overture that could “break the stalemate”, he warned against an Administration plan supporting Israel’s Netanyahu Government that is more of a “ultimatum” to the Palestinians than a proposal for negotiations.

He suggested that the plan is designed mostly to win “further support of the Israelis”, adding, “For us, is not the way to proceed.”

Pompeo has said little about the meeting with Borrell beyond their greeting for the cameras. On Friday, US Ambassador to the EU Gordon Sondland was fired by Trump, over Sondland’s testimony to the House Intelligence Committee about the Trump-Ukraine affair.

So it was left to Borrell to talk of a “reset” in Europe-US relations: “We are not going to banish [our disagreements] overnight, but the best thing we can do is talk about it.”