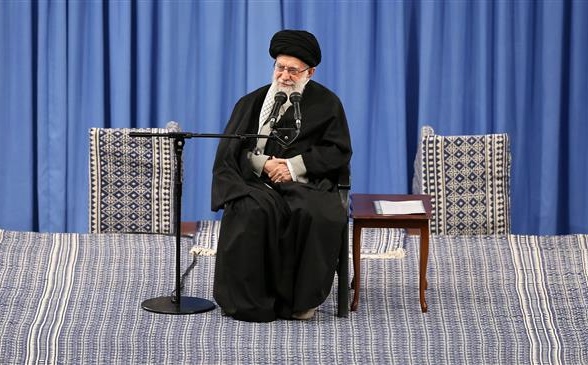 Seeking a display of support amid recent mass protests and regime in-fighting, Iran’s Supreme Leader has appealed for high turnout in Parliamentary elections on February 21.

Addressing an audience in Tehran on Wednesday, Khamenei insisted that participation would solve Iran’s economic problems and social tensions:

If a general election takes place powerfully and correctly, all the existing problems will gradually be resolved….Anyone who takes interest in the country, its security, the resolution of its problems, and the healthy turnover of elites should partake in the polls.

Khamenei has regularly sought high turnout since mass demonstrations challenged the disputed 2009 Presidential election, in which the Supreme Leader mandated the re-election of Mahmoud Ahmadinejad despite widespread evidence of fraud and manipulation.

But the stakes have been raised further by November’s protests over economic conditions, sparked by the Government’s sudden announcement of a 50% to 200% rise in petrol prices. At least 304 demonstrators were killed by security forces, according to Amnesty International. Iranian officials said 1,500 people — protesters, security personnel, and bystanders — were slain.

There were further protests last month when Iran’s military covered up its downing of a Ukraine passenger jet, killing 176 people including more than 100 Iranian citizens.

See also Iran Daily, Dec 23: Supreme Leader — “Do Whatever It Takes to End The Protests”

Iran is facing a loss of between 80% and 95% of its oil exports amid US sanctions. Inflation is more than 40%; productivity, investment, and trade have been crippled; and the currency is at a historically-low level.

The run-up to the vote has been further complicated by a public clash between President Rouhani and the Guardian Council the 12-member body that vets all candidates for Parliamentary and Presidential elections.

After the Council disqualified 2/3rd of more than 1,600 applicants — including 92 current MPs — Rouhani chided, “The greatest danger for democracy and national sovereignty is the day when elections become a formality. May God never bring this day.”

In a partial retreat, the Council reinstated 2,000 candidates with the prospect of more being permitted.

Khamenei avoided any reference to the dispute on Wednesday, instead shifting attention to “enemies”:

A lively vote and people’s all-out turnout at the ballot boxes will guarantee the country’s security because enemies fear the establishment’s popular support more than its armaments.

In the 2016 elections, centrists around Rouhani and reformists took the majority of seats in the Majlis but they have been countered by conservative and hardline criticism and maneuvers, including tension between the Revolutionary Guards and Rouhani.

The political battle has included allegations of both sides of corruption, with Rouhani implicitly challenging the Guards and the judiciary and his brother and former advisor, Hossein Fereydoun, given a five-year prison sentence.