Iran Daily: Guardian Council Steps Back After Rouhani’s Criticism Over Ban on Candidates 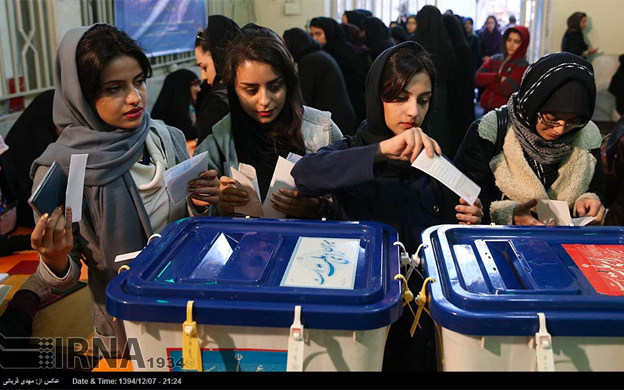 Iran’s Guardian Council has partially retreated, after criticism by President Hassan Rouhani, on its disqualification of candidates for Parliamentary elections this month.

The Council reinstated 2,000 candidates whom it previously disqualified as unacceptable for the February 21 ballot.

Spokesman Abbas Ali Kadkhodaei said the reinstatements came after qualifications were confirmed by “local investigations” which permitted the Council to “fulfil its duties with more precision”: “Out of 16,033 individuals who had been registered, we vetted nearly 4,500 individuals and fortunately the qualifications of more than 50% have been approved.”

Last Tuesday Rouhani, who has faced sustained criticism from hardliners since he took office in August 2013, chided the Council over its ban on almost 2/3 of the candidates. He said the vetting risked MPs being selected “elsewhere”, rather than at the ballot box:

They should at least let there be competition and high turnout….

The greatest danger for democracy and national sovereignty is the day when elections become a formality. May God never bring this day.

Among the barred candidates were 92 current MPs.

The Guardian Council, whose 12 members are named by the Supreme Leader and the judiciary, is seen as a conservative body that has long restricted centrist and reformist candidates from standing for the Majlis or the Presidency. In 2013, it blocked former President Hashemi Rafsanjani, only for Rafsanjani’s protégé Rouhani — approved by the Council as a consolation — to win a surprise victory in the Presidential ballot.

Kadkhodaei indicated that more candidates may be reinstated after they are “reassessed in the next phase of the vetting process”.

He tried to present the Council’s authority and transparency by announcing the launch of a website for the public to report campaign and election violations: “We decided to facilitate communication with people and provide them with new means of relaying their views.”