Iran Daily: Supreme Leader — “Do Whatever It Takes to End The Protests” 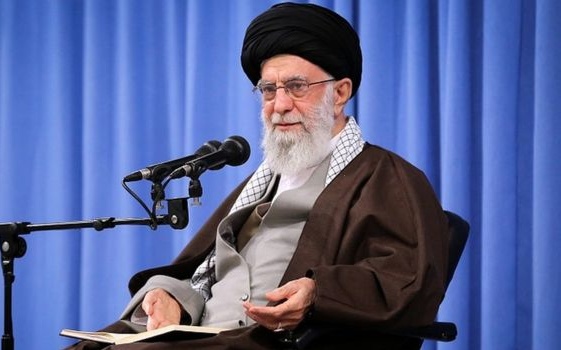 The Supreme Leader addresses an audience in Tehran, November 17, 2019. Hours later, he orders all means necessary to break up mass protests. (EPA)

Iran’s Supreme Leader commanded his officials to “do whatever it takes” to stop November’s mass protests in which hundreds of people were killed by security forces.

“Three sources close to the Supreme Leader’s inner circle and a fourth official” confirmed to Reuters that Ayatollah Khamenei gave the order to quell the demonstrations, sparked on November 15 by the Government’s midnight order for a 50% to 200% rise in petrol prices.

Amnesty International says it has documented the killing of at least 304 people, but “three Iranian Interior Ministry officials” told Reuters that about 1,500 people — including demonstrators and security personnel — were slain. The total includes at least 17 teenagers and about 400 women.

Two of the officials said the death toll is based on information gathered from security forces, morgues, hospitals, and coroner’s offices.

The Iranian regime has not issued an official toll. Families say officials have refused to release bodies of their relatives and warned against any communication with the media.

The officials said Khamenei issued his order on Sunday, November 17, the same day that he intervened in a speech in Tehran: “The heads of power branches have sat down and taken a decision supported by experts. The decision must be implemented.”

The reduction of petrol subsidies was ordered by an “economic war room” set up by Khamenei to combat US sanctions. It consists of President Hassan Rouhani, Parliament Speaker Ali Larijani, and judiciary head Ebrahim Raisi.

Within hours of the late-night announcement, protesters stopped cars on highways and held rallies across Iran. Security forces began trying to disperse the crowds, and some demonstrators burnt banks — a target of anger amid corruption and loss of personal savings — and Government buildings.

The sources said the Supreme Leader criticized the handling of the unrest, angered by the burning of his image and the destruction of a statue of the late Ayatollah Khomeini, the founder of the Islamic Republic.

An official recalled Khamenei’s words, “The Islamic Republic is in danger. Do whatever it takes to end it. You have my order.”

The Supreme Leader said he would hold the officials responsible for the consequences if the protests were not halted.

An official briefed on the meeting said of Khamenei, “Our Imam only answers to God. He cares about people and the Revolution. He was very firm and said those rioters should be crushed.”

By the end of November 18, as President Rouhani said “We will not tolerate insecurity” and the Revolutionary Guards vowed a “decisive response”, security forces had killed hundreds of protesters. More than 8,000 people were reportedly arrested, with detentions ongoing despite criticism from dissident MPs, imprisoned opposition leaders, and international human rights groups.

But “a senior member of the Revolutionary Guards” said the governor of Kermanshah Province in western Iran handed out more commands at an emergency meeting on Monday night. He summarized the governor’s words:

We had orders from top officials in Tehran to end the protest….No more mercy. They are aiming to topple the Islamic Republic. But we will eradicate them.

A local official in Karaj, near the Iranian capital, echoed, “Orders came from Tehran. Push them back to their homes, even by shooting them.”

One of the largest death tolls was in Mahshahr county in tKhuzestan Province in southwest Iran. Residents said security forces, with tanks and machine guns, surrounded demonstrators in marshlands and opened fire.

A local official said, “The next day when we went there, the area was full of bodies of protesters, mainly young people. The Guards did not let us take the bodies.”