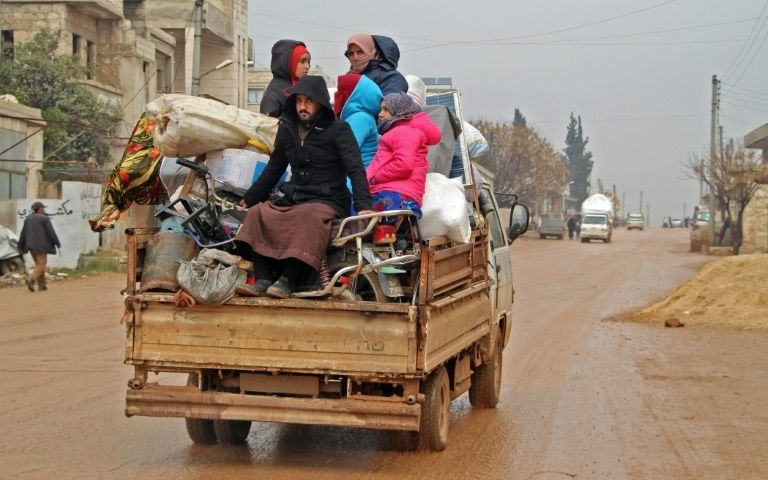 Defying Turkey’s warnings and chatter by the US, a Russia-regime offensive has moved into a key town in Idlib Province in northwest Syria.

Assad regime media and local sources said pro-Assad forces entered Saraqeb, at the junction of the M4 and M5 highways, on Wednesday. The witnesses said rebels had departed after weeks of attacks.

Most civilians had already departed, amid the flight of more than 400,000 people in the last seven weeks towards the Turkish border.

The greater Idlib area has three million residents, about 20% of Syria’s remaining population. Since last April, the Russian regime offensive — shattering a de-escalation zone announced by Turkey and Russia in September 2018 — has killed more than 1,500 civilians, wounded thousands, and more than 800,000.

Saraqeb is 15 km (9 miles) from Idlib city, held by the opposition since March 2015. The M5 highway runs from Aleppo to Damascus, while the M4 is Idlib’s east-west corridor.

Medical officials warned of the scale of the humanitarian crisis, with the displaced trapped between the Russian-regime offensive and the closure of the Turkish border in 2016.

“People are facing a tragedy. For the last two weeks it’s been very, very cold. There is rain and mud, and influenza is spreading,” said Wassim Zakaria, a doctor who works in a clinic in Idlib city that closed on Monday because of bombing.

Selim Tosun, the Turkish Humanitarian Relief Foundation’s (IHH) media advisor, said almost 700,000 people have fled north from southern Idlib since the surge in the offensive in November. He said the number “is rising every hour” and could reach 1 million.

“If the cold weather continues…there is a risk of epidemics as a large migrant flow is coming,” Tosun explained.

Erdoğan to Regime: Withdraw By End of Month

Stepping up a series of warnings, Turkish President Recep Tayyip Erdoğan demanded that Assad regime forces withdraw from Idlib by the end of February.

Erdoğan referred to the September 2018 agreement with Russian counterpart Vladimir Putin for the de-escalation zone, with a ring of 12 observation posts around Idlib and northern Hama Provinces.

We want the regime to immediately retreat to the borders stipulated by the Sochi Agreement, in other words, to retreat behind our observation posts….

We hope that the regime’s process of pulling back behind our observation posts will have been completed within the month of February. Unless the regime pulls back within this period of time, Turkey itself will have to take over the matter.

The Turkish President escalated his rhetoric last week, naming Russia for the first time in his criticism: “We have waited until now, but from this point, we are going to take our own actions.”

The attacks came as Turkey moved forces, including mechanized vehicles, towards Saraqeb.

Erdoğan said Wednesday, “Any attack, be it from ground or air, on our troops or on the friendly elements we are working with will be responded to in kind without any warning irrespective of its origin. No one can object to us exercising by ourselves our right to do so given the failure to guarantee our troops’ security in Idlib.”

But the Turkish President had eased his challenge to Russia on Tuesday — “We will discuss everything, but not with anger” — and there was no attempt by Ankara’s personnel yesterday to stop the occupation of Saraqeb.

With Turkey hosting 3.6 million Syrian refugees, Erdoğan again showed his concern about pressure from the newly displaced, many of whom are in makeshift tents near the closed border. He told MPs of his ruling Justice and Development Party.

The number of people who started to move from Idlib towards the regions we control and our border has reached one million. No one has the right to lay such a burden on our shoulders. We are determined to fix this anomaly swiftly and ensure that the people of Idlib live peacefully in their homes.

US envoy to Syria James Jeffrey said on Wednesday, “This is a dangerous conflict. It needs to be brought to an end. Russia needs to change its policies.”

But Jeffrey gave no indication of any step by the Trump Administration, with Moscow pushing the US aside since Russia’s military intervention in September 2015 to prop up the Assad regime.

Washington is outside the political process, the Astana talks, involving Russia, Turkey, and Iran. The American military presence is limited to northeast Syria, where US personnel have been alongside the Kurdish-led Syrian Democratic Forces, and that has been further hindered by Donald Trump’s orders for withdrawal.

Those requirements [for an alteration of Russia’s policy] are not unreasonable….They require a change in that [Assad] government’s behavior. That government would not survive a week without the Russian assistance.

He also referred to a “limited number of occasions” recently where Russian forces have tried to move into areas in northeast Syria overseen by the US and the SDF: “This is troubling.”

Last month US troops intercepted a Russian patrol moving towards an oilfield. The confrontation ended without gunfire, and the Russians pulled back.

But the deputy commander of American forces in Syria, Air Force Maj. Gen. Alex Grynkewich, cautioned, “Russia is testing us.”

See also EA on Monocle 24: Will US and Russia Clash in Syria?