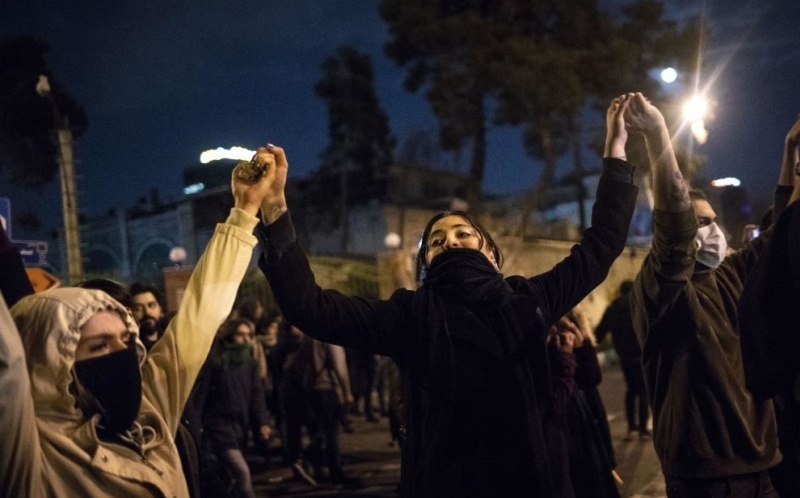 Iran’s regime has tried to regain the initiative after protests over its military’s downing of a Ukraine passenger jet, killing l76 passengers and crew, and coverup of the incident.

Pockets of protest continued for a third day, notably at universities in Tehran and in Isfahan in central Iran. Hundreds of demonstrators continued chants challenging the legitimacy of the regime over its lies about the mass killing.

Immediately after Ukraine International Airlines Flight 752 took off from Imam Khomenei Airport on Wednesday morning — hours after Iran attacked two Iraqi bases with US personnel, in retaliation for the US assassination of Maj. Gen. Qassem Soleimaini — a missile exploded near the Boeing 737 jet, downing it outside Tehran.

Iranian officials quickly said the cause was engine failure. Three days later, the military and President Hassan Rouhani said “human error” was to blame, with an air defense crew mistaking the jet for a cruise missile.

Protesters gathered outside Amir Kabir University in Tehran, chanting “Down with the liars” and “Resignation is not enough. Prosecution is necessary.” The demonstrations spread throughout the weekend, with criticism of the Supreme Leader as well as senior officials.

A Government spokesman claimed on Monday that President Hassan Rouhani and other officials were not aware of the cause of the crash until Friday evening, when they were given the findings of an investigation by the military.

Ali Rabaei did not explain why, given the firing of missiles by air defense on Wednesday, the military waited two days to inform Rouhani.

The regime tried on Monday to shift blame to Washington, with the Secretary of the Supreme National Security Council, Ali Shamkhani, proclaiming, “As long as the US terrorist forces are present in the West Asian region, this region will not achieve lasting stability, peace, and security.”

Meeting the Prime Minister of Syria’s Assad regime — propped up by Iran since the uprising of March 2011 — Shamkhani declared: “Trump and his stupid advisers thought that by assassinating the brave commander of the Resistance Front, Hajj Qassem Soleimani, they would cause the collapse of the front in the region.”

Defense Minister Amir Hatami, alongside Assad regime counterpart Ali Abdullah Ayyoub, echoed, “Martyrdom of Lt. Gen. Qasem Soleimani did not put an end to the Resistance because the Resistance has become an ideology and discourse in the region.” He said the minimum demand was the departure of all American forces from the Middle East.

Immediately after Soleimani’s assassination on January 3, Tehran seized political advantage, pushing the Iraqi Parliament and Prime Minister to expel US personnel from the country and suspending Iran’s commitments under the 2015 nuclear deal.

But the regime’s initiative was overtaken by the downing of the Ukraine jet and the protests, despite the Supreme Leader’s insistence on Sunday that the primary issue is the “corrupting presence” of the US in the region.

The regime also aimed at the UK on Monday, following its brief detention of the British Ambassador last weekend.

The last time UK was dragged along to infamy by the US was in Iraq war. How did that work out?

Take the honorable path for a change: settle court-ordered debt to Iranians

Zarif widened his attack to the European signatories of the 2015 nuclear deal — the UK, France, and Germany:

For 20 months, the E3 — following UK appeasement policy — has bowed to US diktat. That hasn’t gotten it anywhere — and it never will.

The Foreign Minister said the Europeans could “save” the deal, “but not by appeasing the bully and pressuring the complying party”.

Amid serious economic problems, Iran has sought an economic link with the Europeans to bypass comprehensive US sanctions imposed in November 2018.

Last February the European Union announced a mechanism, INSTEX, for trade including Iranian oil and other commodities and goods. However, Tehran rejected the link because of “humiliating conditions”: the EU’s criticism of Iranian missile research and development, activities in the Middle East, and alleged involvement in bomb and assassination plots in Europe.

On Saturday, the UK Ambassador to Iran, Rob Macaire, was held for 30 minutes by Iranian security forces after he attended a vigil at Amir Kabir University for the victims on the Ukraine flight. Regime officials claimed he was supporting protests.