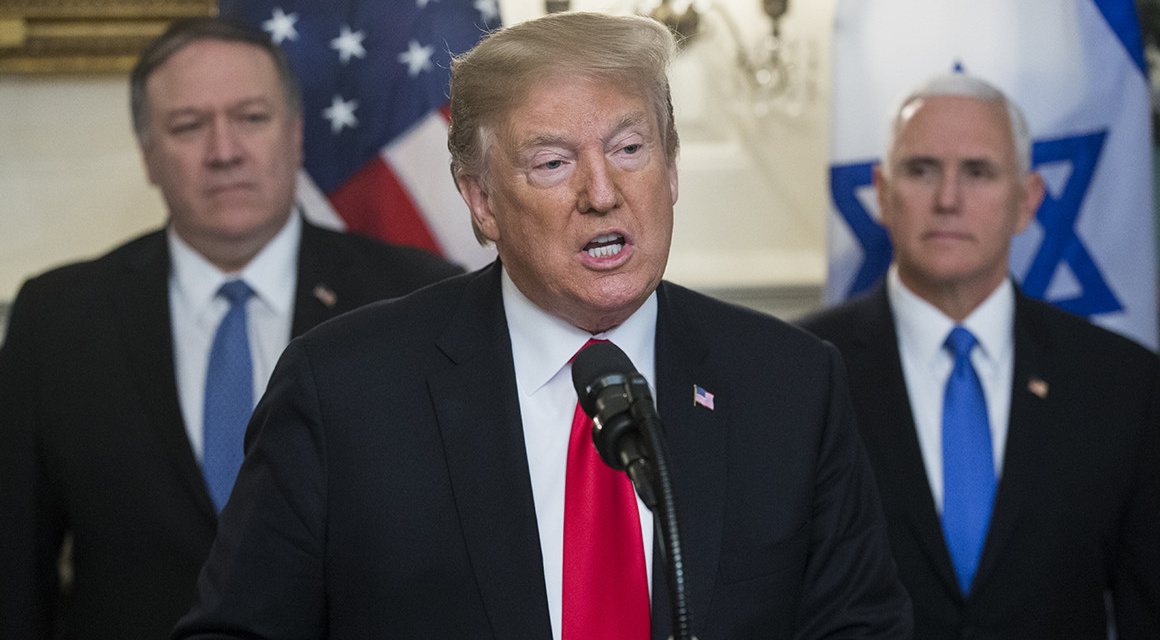 New information details the extent of the campaign by Donald Trump’s top advisors for the assassination of a top Iranian commander and sought a showdown with the Islamic Republic — and how its success gave way to political failure and confusion.

The headline of The New York Times story, based on interviews with dozens of officials, is “How Trump Pushed US and Iran to the Brink of War”. But the article actually reinforces the leading role of Secretary of State Mike Pompeo and Vice President Mike Pence, backed by the CIA and the Pentagon.

Strikes by MQ-9 Reaper drones killed Maj. Gen. Qassem Soleimani, the head of Iran’s elite Quds Force, and the head of the Iranian-backed Iraqi militia Kata’ib Hezbollah on January 3. The attack outside Baghdad International Airport threatened war between Washington and Tehran, until a carefully-calibrated Iranian strike on two Iraqi bases on Wednesday ensured no American casualties.

See also EA on talkRADIO: Taking Apart Trump’s Speech on Iran
Why Trump Administration is in Chaos After Soleimani Assassination

The article follows the established narrative that a Kata’ib Hezbollah rocket assault on an Iraqi base on December 27, killing an American contractor and wounding four US troops, was the catalyst for escalation. But it establishes from American officials that the Iranian-backed militia was not seeking casualties: “The rockets landed in a place and at a time when American and Iraqi personnel normally were not there.”

That did not matter to Trump advisors seeking a confrontation. They told Trump that Iran was playing upon his perceived weaknesses, after his last-minute decision in June to call off American airstrikes inside the Islamic Republic.

The immediate outcome was US strikes on five Kata’ib Hezollah positions, three in Iraq and two in Syria, that killed 25 militia and wounded 51.

The US attacks in turn brought a display from supporters of the Iran-backed Iraqi militias, who entered the US Embassy compound in Baghdad on December 31. They broke windows, lit fires, and daubed graffiti on walls.

There were no US casualties, as staff had been evacuated before the raid. More than 100 Marines deployed from Kuwait to use tear gas and non-lethal weapons to disperse protesters.

But the hardline advisors now has another lever to use on Trump. They told him that he risked a “Benghazi”, the 2012 attack on the US Consulate in Libya’s second city that killed four Americans including Ambassador Christopher Stevens.

They prepared a top secret memorandum that listed targets such as an Iranian energy facility and a Revolutionary Guards command-and-control ship in the Persian Gulf, allegedly involved in attacks on oil tankers this spring and summer.

The memo also set out the option of assassination. Among the targets were Soleimani and Abdul Reza Shahlai, a Qods Forces commander in Yemen who financed the militias across the Middle East.

The CIA reported intelligence that Soleimani was working on an attack to put pressure on US troops to leave the Middle East, bolstering Trump’s desire for withdrawal.

The material was more of a “mosaic effect” pointing to an operation rather than a definitive indicator of the scale, timing, and location of an attack. It did not establish an “imminent” threat — but Secretary of State Pompeo represented it as such, insisting after the Soleimani’s assassination that it could have killed “hundreds”.=

CIA Director Gina Haspel also boosted Pompeo by saying that the consequences of not striking Soleimani were more dangerous than those which would follow an assassination. She said Iran’s response would be measure, predicting — correctly — that Tehran would carry out a missile strike on Iraqi bases without inflicting US casualties.

Pompeo and other advisors could proceed with the assassination plan, even if after the event, some officials would insist that they were shocked that Trump chose the extreme option.

From Winning to Confusion

But over the weekend, Trump was angered that TV coverage focused more on a dangerous escalation with Iran. Still on vacation at his Mar-a-Lago resort in Florida, he sought out guests to tell him that he had been a decisive, effective leader. And he risked entangling Iran with domestic politics, saying he had sought out hawkish Republican Senators who would be involved in his forthcoming impeachment trial.

That further compounded possible blowback from the Trump Administration’s decision not to advise Congressional leaders — the “Gang of Eight” — or consult allies before the assassination. Israeli Prime Minister Benjamin Netanyahu, who hoped since 2012 to strike Iran but had been checked by his advisors, was effusive in support. But Saudi Arabia’s Crown Prince Mohammed bin Salman was unsettled, and no European country backed the assassination. Instead, as Iran suspended its commitments under the 2015 nuclear deal, the Europeans put a priority on de-escalation and a path back to the agreement.

Trump told French President Emmanuel Macron that the Iranians only had to come to him to seek a deal. Macron told President Hassan Rouhani that he “missed a chance in September”: Rouhani’s refusal of the French President’s arrangement of Trump’s virtual meeting, via speaker, with the Iranian in a hotel conference room on the sidelines of hte UN General Assembly.

Instead, the Iranians scored a major victory when the Iraqi Parliament adopted a bill for the expulsion of US troops from the country. Tehran’s suspension of the nuclear deal might be leverage in its effort for links with other countries to bypass US sanctions. And millions of Iranians defied the Trump Administration’s vision of regime change, turning out for Soleimani’s funeral processions across the country.

Far from a triumph of decapitating the regime, the Administration was under pressure at home and abroad over its escalation. So Trump’s advisors now sought a way out: they used Switzerland, which has represented American interests since the aftermath of the 1979 Islamic Revolution, to send a message warning against any retaliation for the assassination.

The regime represented this, in the words of Revolutionary Guards Deputy Commander Rear Adm. Ali Fadavi, as “if you want to get revenge, get revenge in proportion to what we did”.

Trump complicated the effort with Twitter bluster that he would attack 52 Iranian targets, including cultural sites, bringing further international concern and condemnation. In facts, while the Americans were ready to hit the Iranian oil and gas facility and the Revolutionary Guards command-in-control ship in the Persian Gulf, there were no cultural sites on the list.

After confirmation of no casualties, Trump proclaimed on Twitter, “All is Well”. However, even as he declared later Wednesday in a speech, “Iran is standing down”, Tehran was pressing its political advantage. The Supreme Leader and other officials doubled down on their goal: the removal of all US troops from the Middle East.

The Administration seemed uncertain how to react. The Iranian regime built on the display around Soleimani’s funeral procession to proclaim victory.

But on Wednesday morning, the Iranians had not only struck the Iraqi bases. An air defense position had also fired two missiles at a Ukraine passenger jet, mistaken for a cruise missile, and killed its 176 passengers and crew.

Now it was the regime on the defensive, not from US military action but from international condemnation and protests at home. For the moment, Trump and his advisors had been saved from further consequences of their assassination decision.