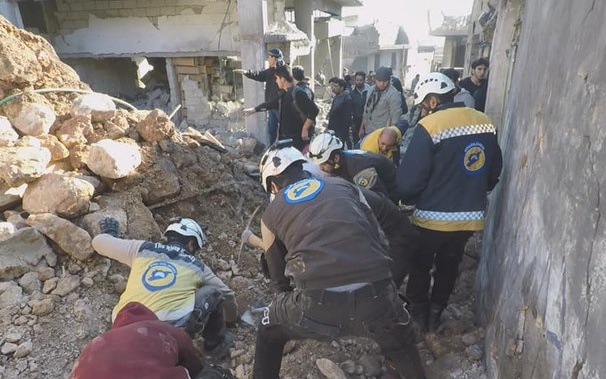 A report from journalist Hadi al-Abdallah on the latest mass killing of civilians in Idlib Province by pro-Assad forces:

Field hospitals in #Idlib are overcrowded with martyrs and wounded!

''So far according to medical
sources, at least #fifteen martyrs,''@HadiAlabdallah: Russian/regime air-strikes injured dozens "most of them children"

Rescue of a child from under rubble:

ORIGINAL ENTRY: At least 20 people have been killed and more than 40 wounded in the latest pro-Assad bombing of Idlib Province in northwest Syria, the last major opposition area in the country.

Warplanes attacked four towns and cities, with seven people killed in Idlib city, four in al-Nayrab, and six in Binnish. At least six children were among the victims.

A bloody and tragic day in #Idlib before the start of the cease-fire decision … 3 horrific massacres kidnap the lives of 18 people so far. Scenes from the first moments of the regime's airstrikes on Idlib City. 8 people were killed and 39 others were injured. pic.twitter.com/f7lfhTBg6L

The strikes came before a Sunday ceasefire, announced by Russia and Turkey, is supposed to take effect.

Since late April, Russia and the Assad regime have been pursuing an offensive to retake the opposition area, shattering a “de-escalation zone” around Idlib and northern Hama Province which was announced by Moscow and Ankara in September 2018.

The offensive has killed almost 1,200 civilians, wounded thousands, and displaced more than 600,000. Russia and the regime have seized almost all of northern Hama and part of southern Idlib, with Turkey unable to check the assault and the advance.

Russian President Vladimir Putin declared a pause in operations in early September, but they resumed with even greater intensity in November. Within two weeks in December, more than 235,000 people fled the area in and near the city of Ma’arat al-Num’an.

Pro-Assad bombing struck the White Helmets civil defense center in the city on Saturday, damaging it and destroying the warehouse.

UN officials have said the attacks are tantamount to a “war crime”, but the international community has been unable or unwilling to take any action. Instead, Russia and China vetoed the continuation of UN cross-border aid last month and only allowed a limited six-month extension on Friday.

Muhammad, his parents’ only son, and brother to six sisters, was martyred Yesterday in the air raid by Assad’s and Russia’s planes on the city of #Idlib today.#Syria #EyesOnIdlib #Rise4Idlib #IdlibUnderFire pic.twitter.com/l04kRoNNJw