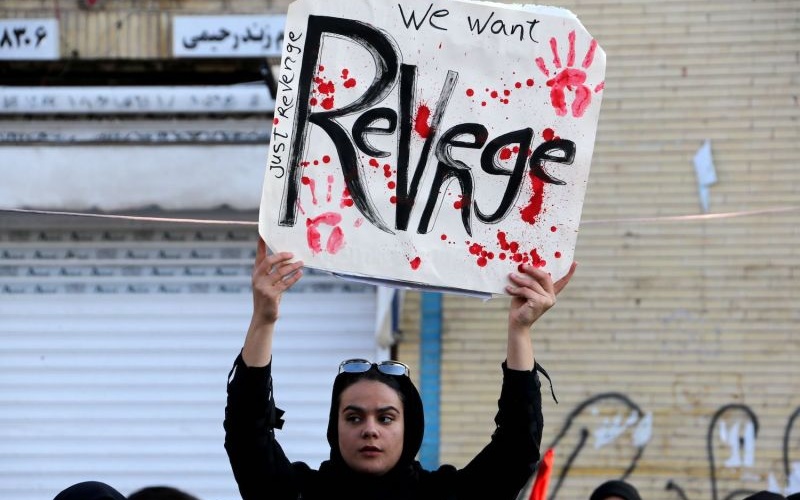 An Iranian mourner makes her statement during the funeral procession of Maj. Gen. Qassem Soleimani, assassinated by the US military, January 7, 2020 (Atta Kenare/AFP/Getty)

An Iranian academic, a prominent regime spokesperson on English-language media, has warned Gulf States that they could be destroyed if the Trump Administration makes a military response to Tehran’s missile strikes.

Seyed Mohammad Marandi of Tehran University tweeted just after the Iranian attacks on two US bases.

Everyone should immediately leave the UAE, Saudi Arabia, Bahrain, and other counties where US bases are seen as a threat to Iran. If the Trump regime makes a foolish move, these regimes will be held responsible, considered hostile entities, attacked with full force, and destroyed

The Supreme Leader, in an address to the nation, has offered a marker to Iran’s next steps.

Ayatollah Khamenei said of the early-morning strikes on two US bases in Iraq: “The talk of revenge and such debates is another issue. For now, a slap was delivered on their face last night.”

The lying, rambling US govt – whose words are worthless – tried to introduce this great Mujahid & Commander in the fight against terrorism as a terrorist. The Iranian nation slapped them in the face with their turn out in the millions for the funeral of General Soleimani.

Significantly, he pointed to Iran’s political effort for the expulsion of US troops from Iraq, approved by the Iraqi Parliament on Sunday: “What is important about confrontation is that military action as such is not sufficient. What is important is that the seditious American presence in the region must end.”

He claimed that “war, sedition, and destruction” was brought to the region by “America, the Zionist regime, and the arrogant apparatus of corporations and institutions”:

This must end. This region does not accept the American presence. Governments emanating from their people do not accept this.

Khamenei said, “The Iraqi parliament’s act for the expulsion of America from Iraq was…very good. May God help them continue this path.”

He claimed victory in the turnout of millions of Iranians for the funeral processions of the assassinated Maj. Gen. Qassem Soleimani: “Enemies felt humbled by the magnificence of the Iranian nation’s turnout for the funeral of Martyr Soleimani. They may not admit it, but they have no other option but to accept it.”

General Soleimani fought heroically against ISIS, Al Nusrah, Al Qaeda et al. If it weren’t for his war on terror, European capitals would be in great danger now.
Our final answer to his assassination will be to kick all US forces out of the region.

Mahdi said he then notified US and Iraqi military commanders. He claimed that there were no casualties among either American or Iraqi troops.

ORIGINAL ENTRY: Retaliating for the US assassination of its top commander Maj. Gen. Qassem Soleimani, Iran has fired more than a dozen missiles at two American bases in Iraq.

However, the US military indicated there were no casualties and Tehran signaled that it will not attack again unless there is a US counter-assault.

See also Why Trump Administration is in Chaos After Soleimani Assassination

Missiles were fired about 1:20 am local time (2230 GMT) on al-Asad airbase in western Iraq, hit at least six times. and at a base in Erbil in Iraqi Kurdistan in the north of the country. Iranian media reported a second strike on al-Assad at 3:20 am.

US forces were on high alert, expecting an Iranian reaction to the killing of Soleimani and the leader of an Iran-supported Iraqi militia by an American drone strike last Friday outside Baghdad International Airport.

At home, the Iranian military played up the strikes as “tens” of missiles fired on the Americans. They emphasized that the timing of the attacks was exactly a week after the US killing of Soleimani. Iranian media, countering the American statement, said there had been “casualties”.

However, writing in English, Foreign Minister Mohammad Javad Zarif, indicated that the strike had completed the Iranian payback for the assassination of Soleimani, the head of the elite Qods Force of the Revolutionary Guards.

Iran took & concluded proportionate measures in self-defense under Article 51 of UN Charter targeting base from which cowardly armed attack against our citizens & senior officials were launched.

We do not seek escalation or war, but will defend ourselves against any aggression.

Donald Trump indicated that there was no need for another US attack with three words: “All is well!”

All is well! Missiles launched from Iran at two military bases located in Iraq. Assessment of casualties & damages taking place now. So far, so good! We have the most powerful and well equipped military anywhere in the world, by far! I will be making a statement tomorrow morning.

The large al-Asad airbase, about 60 km (37 miles) west of Baghdad, has been a main position for US and coalition forces since the 2003 US-led invasion of Iraq. It hosts about 1,500 foreign troops.

Further indication of Iran’s next steps will come in an address by the Supreme Leader on Wednesday morning.

Deaths in a Funeral Procession and on a Passenger Flight

However, the eventual missile strikes were overshadowed by other developments. During the procession in Kerman, Soleimani’s hometown, at least 50 Iranians were killed and more than 200 injured in a stampede. The general’s funeral was postponed.

Then, just after 6 am on Wednesday, a Ukrainian passenger jet crashed soon after takeoff from Tehran’s Imam Khomeini Airport.

All crew and passengers — 179 people — died on the Ukraine International Airlines flight for Kyiv. All but 32 of the victims were Iranian citizens.

There was no sign of a connection of the US-Iran confrontation.