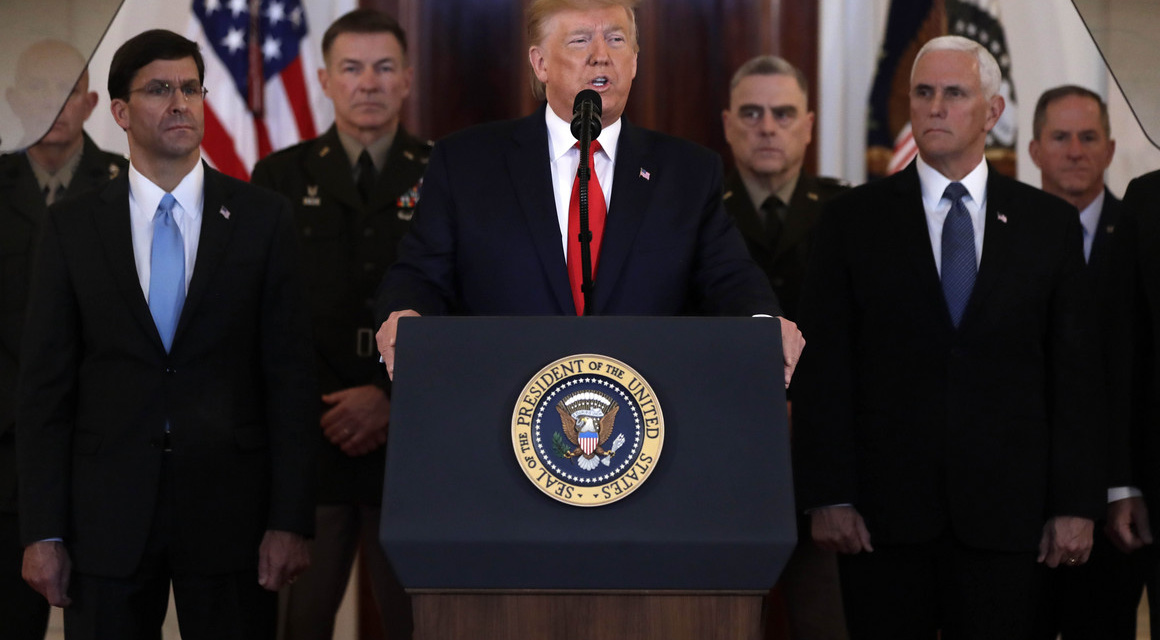 In a speech filled with mistakes and falsehoods, Donald Trump backs away from a military showdown with Iran.

Five days after the US assassination of Iran’s top commander Maj. Gen. Qassem Soleimani, Trump declared that Iran was “standing down” following its missile attacks on two Iraqi bases with US personnel on Tuesday. The line signaled that — with Iran warning of further retaliation against US escalation — the Trump Administration would not respond with another strike.

But beyond the step back, Trump — reading from a script, sniffing, and often slurring his words — was vague and contradictory about next steps. After denouncing and ridiculing the regime, he stated a general willingness for talks: “The United States is ready to embrace peace with all who seek it.”

He repeatedly misrepresented the 2015 nuclear deal with Iran — even saying it was in 2013 — but gave no indication of what his deal with Tehran might entail.

See also EA on talkRADIO: Taking Apart Trump’s Speech on Iran
Why Trump Administration is in Chaos After Soleimani Assassination

Trump’s one firm announcement was of more harsh economic sanctions on the Islamic Republic. However, with the US already imposing comprehensive restrictions across the Iranian economy and its officials, he did not explain what more could be sanctioned. Nor did he explain how more rather than less sanctions would bring the Iranian regime into discussions.

And in a vague, perhaps fanciful notion which pointed to his possible desire just to leave the situation, Trump said that NATO should take respnonsibility for Middle Eastern matters.

A Mix of Threat and Vague Approach for Talks

Trump strode into White House Grand Foyer, a half hour late, pronouncing, “Iran will never have a nuclear weapon.”

He then read a script which said Iran’s Tuesday strikes, with more than a dozen strikes, could be celebrated as there had been no casualties.

Trump did not mention the likelihood that Tehran had pursued an operation saving face at home — the Supreme Leader declared a “slap” inflicted on the Americans and Iranian media falsely said 80 US personnel had been killed — but, by giving advance notice of the targets, had ensured that there would be no fatalities.

Instead he assailed Soleimani at length as a terrorist, killing Americans and others, who had to be assassinated. And he derided the Islamic Republic for “destructive and destabilizing behavior in the Middle East and beyond”.

Trump then misrepresented the nuclear deal between Iran and the 5+1 Powers (US, UK, France, Germany, Russia, and China). He falsely said that it had “given” Iran $150 billion, which he claimed had funded missiles killing US troops, and that it would soon expire.

In a sharp — and likely futile — demand, he said the other signatories of the agreement, from which Trump withdrew in May 2018, must now leave the deal. Then came the sudden proclamation that these steps would lead to his own deal with the Iranian regime.

We must all work together toward making a deal with Iran that makes the world a safer and more peaceful place.

We also must make a deal that allows Iran to thrive and prosper and take advantage of its enormous untapped potential. Iran can be a great country.

However, rather than explaining the lines of a deal, Trump immediately returned to threat and denunciation: “The civilized world must send a clear and unified message to the Iranian regime: Your campaign of terror, murder, mayhem will not be tolerated any longer.”

And after his curious message for NATO to enter the region — punctuated with “we do not need Middle East oil”, Trump returned to his chest-thumping, also with an eye on his re-election campaign:

US armed forces are stronger than ever before. Our missiles are big, powerful, accurate, lethal and fast. Under construction are many hypersonic missiles.

He closed with the boast that his Administration had killed the Islamic State leader Abu Bakr al-Baghdadi and slain or captured “tens of thousands of ISIS fighters”, pivoting to another approach to Iran for talks: “ISIS is a natural enemy of Iran. The destruction of ISIS is good for Iran and we should work together on this and other shared priorities.”

But Trump never noted that the Iranian who led the anti-ISIS effort, after the group seized 1/3 of Iraq and part of Syria from 2014, was Maj. Gen. Qassem Soleimani.