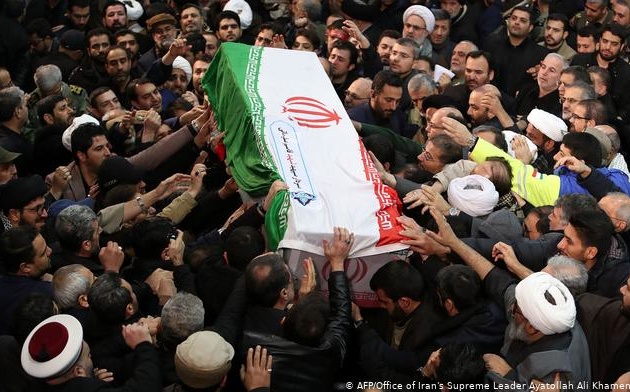 Iranian media is reporting an official death toll of at least 40 people in a crush during the funeral procession for Gen. Qassem Soleimani.

The fatalities were in Kerman in southeast Iran, Soleimani’s hometown, where his body was being taken for burial. At least 213 people were injured.

“Unfortunately, as a result of a stampede, some of our compatriots have been injured and some have been killed during the funeral processions,” Pirhossein Koulivand, head of the Iranian emergency medical services, said.

Soleimani’s burial has now been postponed.

We will take revenge; a revenge that will be tough, strong, decisive and finishing and will make them regret. We will set ablaze the place they like, and they know where it is.

Today, the seeds of hatred for the U.S. have been sown in the hearts of Muslims.

Meanwhile, the Trump Administration has said it will not issue a visa for Foreign Minister Mohammad Javad Zarif to attend a UN Security meeting in New York.

The Administration warned in September, at the time of a General Assembly session, that it might not give Zarif a visa. It has also put the Foreign Minister on a sanctions blacklist, freezing his assets in the US even though he none.

He has no respect for international law [as] he is prepared to commit war crimes, because attacking cultural sites is a war crime….

Has [he] made the US more secure? That’s the price for arrogance, for ignorance, for lack of respect. Their days in our region are numbered, not because anybody will take any action against him but because they are not welcome.

#NEW: Iranian Foreign Minister Javad Zarif sat down with @fpleitgenCNN as the country deals with the death of Soleimani.@JZarif: "Attacking cultural sites is a war crime…but he doesn't care it seems about international law…Their days in our region are numbered." @cnni pic.twitter.com/W3LjGGcQSm

ORIGINAL ENTRY: The Supreme Leader has instructed Iran’s officials to puruse “direct and proportional” retaliation against the US, following the American military’s assassination of top Iranian commander Qassem Soleimani.

As hundreds of thousands of people gathered in Tehran for Soleimani’s funeral procession, three Iranian sources told The New York Times of Ayatollah Khamenei’s instruction. They said that the retaliation would be by Iranian forces and not by proxies such as Lebanon’s Hezbollah.

The message reinforced the Iranian regime’s emphasis on attacks against US military positions and personnel, with no targeting of civilians. Tehran’s officials contrasted this with Donald Trump’s Twitter threat to strike 52 Iranian civilian and cultural sites.

See also TrumpWatch, Day 1,082: Confusion and Pushback on Trump Over Iraq and Iran

President Hassan Rouhani drove home the point on Twitter, with a reference to the downing of an Iranian passenger jet by a US warship in 1988, killing 290 people:

Those who refer to the number 52 should also remember the number 290. #IR655
Never threaten the Iranian nation.

War Rhetoric But A Political Response?

Speakers in Monday’s Tehran ceremony echoed the rhetoric of the Supreme Leader of “crushing revenge” through attacks on the US military.

Revolutionary Guards Gen. Hamid Sarkheili told the crowd, “We are ready to take a fierce revenge against America. American troops in the Persian Gulf and in Iraq and Syria are within our reach.”

Guards eulogist Sadegh Ahangaran exhorted the mourners to raise their voices so “damned America can hear you” and “wave the flags in preparation for war”.

And Soleimani’s daughter Zeinab said, “The families of the American soldiers in western Asia…will spend their days waiting for the death of their children.”

But the regime’s measures for now continue on a political path. The Government announced on Sunday that it will suspend all commitments under the 2015 nuclear deal with the remaining 5+1 Powers (UK, France, Germany, China, and Russia), with the prospect of a return to pre-2015 enrichment of 20% uranium.

And Iranian officials are pressing the Iraqi Parliament and outgoing Prime Minister Adil Abdul al-Mahdi to expel US troops from the country. On Sunday, the Parliament adopted a bill, drafted by Mahdi for the expulsion; however, no plan or timeline was set to ensure the withdrawal.

Soleimani’s successor as head of the Qods Force, the elite Revolutionary Guards branch operating outside Iran, said in an interview on State TV: “God the Almighty has promised to get his revenge, and God is the main avenger. Certainly actions will be taken.”

Brig. Gen. Esmail Qa’ani proclaimed, “We pledge to continue the martyr Soleimani’s path as firmly as before with the help of God, and in return for his martyrdom, we aim to get rid of America from the region.”

However, Gen. Amir-Ali Hajizadeh, head of the Guards’ aerospace division, focused on the political goal while continuing the rhetoric of military confrontation:

Firing a couple of missiles, hitting a base or even killing Trump is not valuable enough to compensate for the martyr Soleimani’s blood. The only thing that can compensate for his blood is the complete removal of America from the region and taking away their evil from the oppressed people of the region.