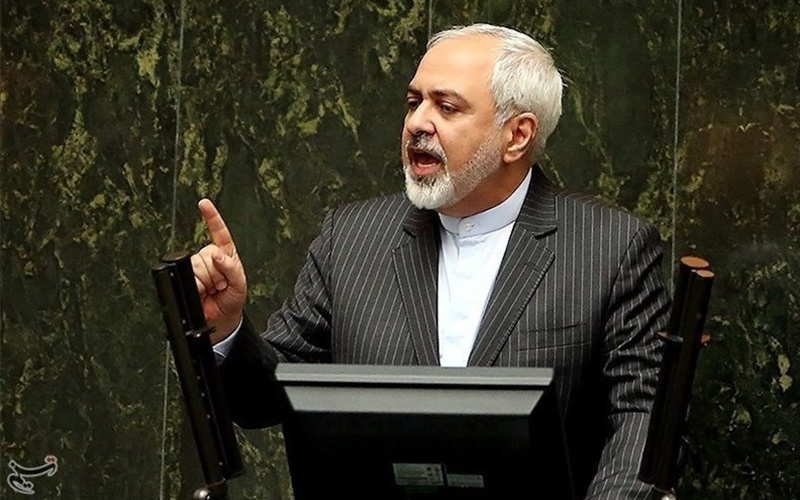 Iran has again threatened to pull out of the 2015 nuclear deal, playing a political game of “chicken” with European countries trying to salvage the agreement between Tehran and the remaining 5+1 Powers (UK, France, Germany, and Russia).

After the Supreme Leader’s diatribe on Friday over the US and Europe — almost ignoring the 176 victims of the Ukraine passenger jet downed by the Iranian military on January 8 — Iran’s Foreign Minister Mohammad Javad Zarif (pictured) followed up on Monday with the assurance that Iran will leave the Nuclear Non-Proliferation Treaty if European powers refers Tehran’s nuclear case the UN Security Council.
#JCPOA #UNSC

#Iran's Foreign Ministry spokesman (on #EU threats re DRM & snapback): If these things continue, Iran will prepare for the final and more effective step in relation with the #nuclear deal. #JCPOA pic.twitter.com/vKrcFV8B8z

Last week the UK, France, and Germany announced they would trigger the dispute mechanism over the deal, following Iran’s suspension of a series of commitments amid US sanctions and the failure to establish an economic link with the Europeans.

If the mechanism is invoked, there is a 15-day deadline to resolve the dispute. This can be extended in 15-day intervals up to a total of 60 days. If there is no resolution by then, the UN automatically restores sanctions in place against Iran from 2010 to the implementation of the deal in January 2016.

Iran is not much for threats, but we state frankly that if Europe, for any reason, adopts an unfair approach…we will then make a serious decision about our cooperation with the IAEA, and the plan is ready at the Iranian Parliament….

We will not start this, but [we will] act in accordance with the Europeans’ measures. Therefore it is better for them to be fair and reasonable about this.

Last February, following US withdrawal from the agreement and imposition of comprehensive sanctions, the European Union launched the INSTEX mechanism for purchases of Iranian oil and other commodities and goods, bypassing American restrictions. But Tehran rejected the link because of “humiliating conditions”: the EU’s concerns about Iran’s missile research and development, activities in the Middle East, and alleged involvement in bomb and assassination plots in Europe.

Since June, the Rouhani Government has responded with a series of steps suspending its adherence to the Joint Comprehensive Plan of Action: breaking the limit on stocks of 3.67% uranium, raising enrichment to 4.5%, installing advanced nuclear centrifuges, and halting the redesign of the Arak heavy water reactor to prevent plutonium by-product.

Mousavi joined other military and political officials in a series of threats of retaliation, telling reporters, “We have declared that we would target anywhere from which an action is taken against Iran.”

Maj. Gen. Esmail Qa’ani, who succeeded the assassinated Qassem Soleimani as head of the elite Quds Force of the Revolutionary Guards, said at his swearing-in ceremony:

#Iran's Qods Force new commander Qaani: "The enemy assassinated #QasemSoleimani cowardly. They were not the man of the battlefield to engage with him in the field… God willing & with the help of God, we will hit his enemy fairly".#IRGC pic.twitter.com/UzpMX1ijfW

New head of #Iran #IRGC Quds Force today: “They [US] hit him [#Soleimani] in a cowardly way, but with God's grace and through endeavours of freedom-seekers around the world who want vengeance over his blood, we will hit his enemy in a manly fashion.” 1/2 pic.twitter.com/M2q9O0me58

Soleimani was killed by a US drone strike on January 3 outside Baghdad International Airport, sparking the prospect of military confrontation. Iran also tried to use the assassination to seize political advantage, for example, with expulsion of US forces from Iraq.

However, the Iranian initiative was checked by its downing of the Ukraine flight by anti-aircraft missiles. The military covered up the episode for three days, leading to international condemnation and protests at home.