EA on Monocle 24 and talkRADIO: Will There Be A Real Trump Trial?; The Democrats Debate 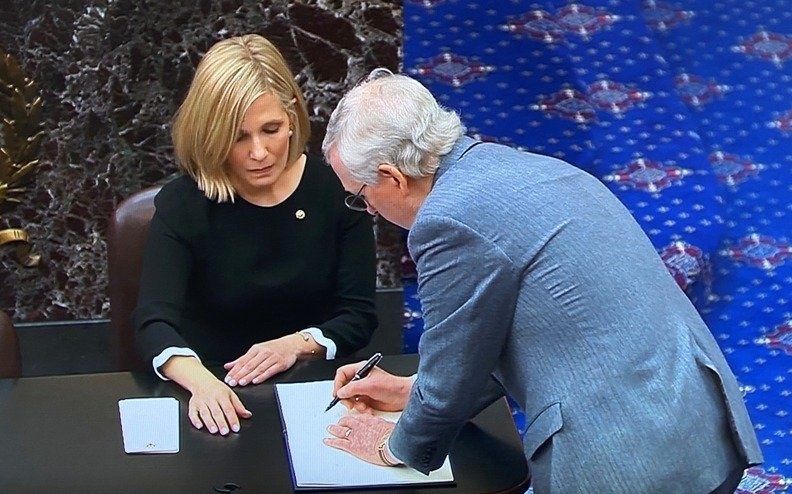 I spoke with Monocle 24’s Emma Nelson on Monday about the developments in the Trump trial, including the attempts at a “non-trial” by Senate Majority Leader Mitch McConnell through the denial of witnesses and documents.

We also discuss Trump’s private concern about the trial and his naming of celebrity lawyers Kenneth Starr and Alan Dershowitz to his defense team,

Trump’s fortunes rise and fall with McConnell. And as long as McConnell is co-dependent with Trump, that he will not be impartial as the Constitution demands, Trump’s people will think, “We can get away with this.”

ORIGINAL ENTRY: In our latest 15-minute Journey Across Trump-Land, I joined talkRADIO’s Alexis Conran on Saturday for a serious discussion of whether Senate Majority Leader Mitch McConnell will ensure that Donald Trump escapes a real impeachment trial.

Before we get serious, we navigate the comedy of Trump’s comments on dishwashers, showers, and light bulbs that supposedly make him look orange (“I don’t think that has anything to do with the bulb”), as well as his comments to the military that the US should return to a steam-powered navy.

Then it’s to the main event of McConnell’s continuation of the White House effort to prevent any witnesses or documents over the Trump-Ukraine affair — an effort that brought an impeachment charge of obstruction of Congress.

We conclude with a look at a debate among the Democrat candidates for President which was rich on issues but poor on media coverage, in one of the most important elections in US history.