Syria Daily: The Imminent Death of A City in the Northwest 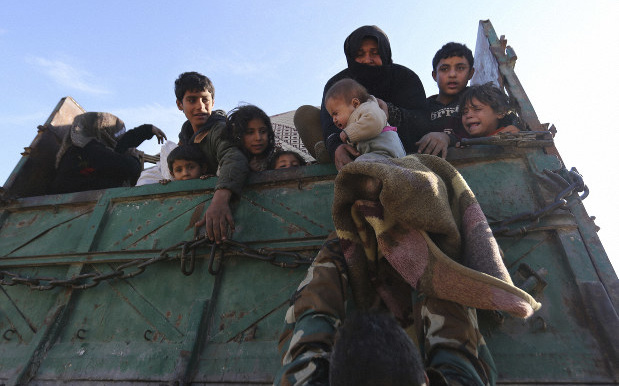 Video and images of civilians who fled from the Ma’arat al-Num’an area, living in the open:

The tragic situation of our families displaced from the villages of rural Ma`rat al-Nu`man al-Sharqi, south of Idlib.#IdlibUnderFire#İDLİBÖLÜYOR#İNSANLIKÖLÜYOR#ادلب_تحت_النار#سوريا#ادلب pic.twitter.com/HGoebMhzKR

IDPs from Ma`rat al-Numan. Sitting close to the border with Turkey. Without homes or tents pic.twitter.com/YMAqCMfTUi

Latest news this morning from Ma’arat al-Num’an, via Insight Media and the White Helmets civil defense:

Insight producer Abdussamed Dagul with the latest updates from inside the city of Maarat Nouman, southern countryside of #Idlib. pic.twitter.com/CHHOXMTiz6

Local sources said about 10,000 people are still in the city. The sources said Assad forces have occupied about 35 villages to the south and east.

ORIGINAL ENTRY: Civilians are emptying the city of Ma’arat al-Num’an in northwest Syria as a Russia-regime offensive prepares to occupy the area.

Despite the risk of attack by the Russia-regime forces, most of the population of 70,000 have evacuated in the past week. They are heading further north in Idlib Province, the last major opposition territory in Syria.

Local sources told EA on Friday of a mass evacuation despite Russia and the regime attacking convoys and the danger of travelling at night, with women telling aid workers “that they prefer to be killed by accidents and not have one of their children killed or injured by bombs”.

The situation worsened over the weekend. The Russian-regime offensive closed on Ma’arat al-Num’an despite losses from a suicide vehicle bomb, as airstrikes pounded the city.

#Syria: last call for evacuation of civilians from #MaaretNuman, 2nd Greater #Idlib town, as pro-Assad forces are now ~8 km from the town. https://t.co/ST8L106yVj

“Alaa”, a local activist who is organizing evacuations, summarized:

People started walking out of the city.

This is unbearable. I cannot stop thinking of the poorest left behind.

She spoke of the efforts of aid workers, even as Russia vetoed an extension of UN cross-border assistance: “Funding was limiting us, but we decided to go ahead and sort out money later. Now the limitation is safety.”

Russian warplanes are targeted the displaced which are fleeing from Marrat al-Numan to the northern areas near the border areas with turkey. Located "On the road between Termanin and AlDana" #SaveIdlib pic.twitter.com/rS1wQvQN0s

Another local aid worker, “Ahmad”, said about 30,000 people are still trapped in Ma’arat al-Num’an as of Saturday night.

The UN noted the flight of tens of thousands of people: “Many of those who fled are in urgent need of humanitarian support, particularly shelter, food…[and] non-food items such as winter clothes and health services.”

Some of the newly-displaced are slepping in olive groves despite the Syrian winter.

But with Russia enabling the assault and blocking political and humanitarian measures, the UN offered no prospect of intervention in the greater Idlib area, which has more than 3 million people — 20% of Syria’s remaining population.

Russian occupier and regime fighter jet pilots are cutting off civilians trying to flee #Maaret_Annuman, targeting their cars with air strikes on the highway from the northern entrance of the city, killing and injuring several of the people trying to flee.

The Russian-regime offensive was launched in late April, shattering a Russian-Turkish “de-escalation” zone. Seizing almost of northern Hama Province and part of southern Idlib, the assault has killed more than 1,100 civilians, wounded thousands, and displaced more than 500,000.

Russian President Vladimir Putin declared a pause in early September, but bombing was renewed in November and stepped up last week, a 12th-century madrassa, and remains of a medieval citadel.

The city has been prominent throughout the Syrian conflict with its challenge, seen in mass demonstrations, to the Assad regime and its backers Russia and Iran. It has also resisted the hardline jihadist bloc Hay’at Tahrir al-Sham, which took over much of Idlib from 2017.