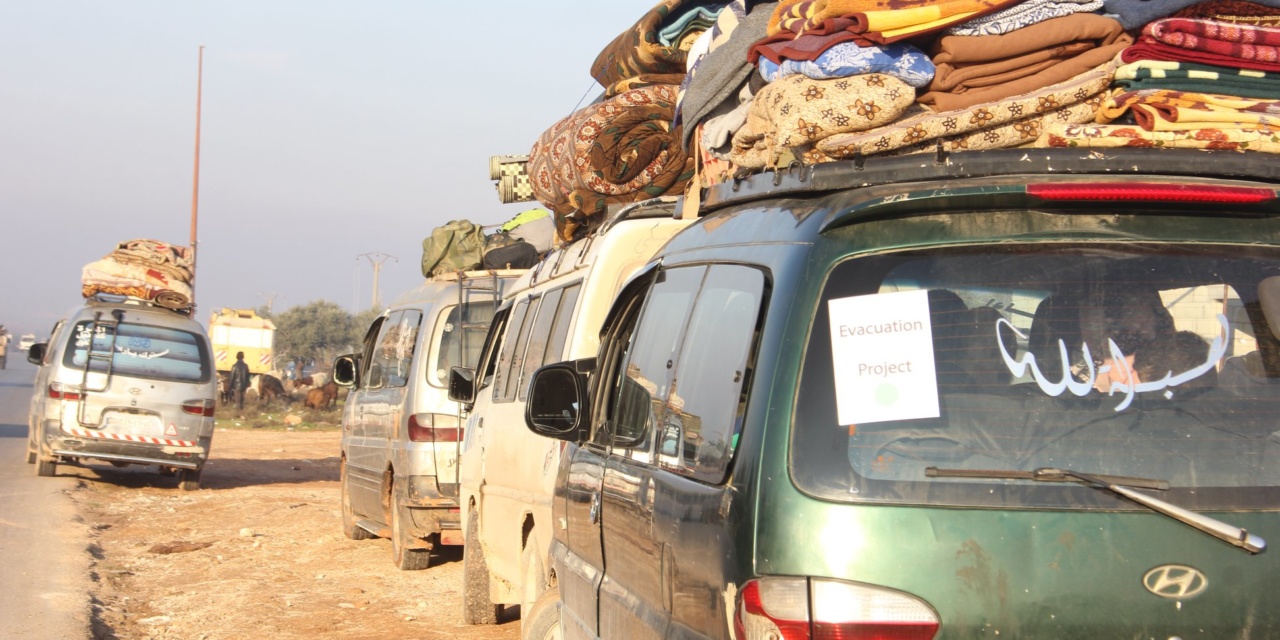 An evacuation from the Ma’arat al-Num’an area of northwest Syria amid Russian-regime bombing and shelling, December 20, 2019

Amid a Russia-regime offensive and Moscow’s block of aid, hundreds of thousands of civilians are at risk in a humanitarian crisis in Idlib Province in northwest Syria.

Russia and the Assad regime have again stepped up bombing and shelling on the last major opposition area in Syria, with the resumption of ground operations which may be aiming for the city of Ma’arat al-Num’an with its 70,000 people.

Since Monday, more than 50 civilians — most of them women and children — have been slain in attacks which have targeted markets and displaced persons’ camps. More than 100,000 have been displaced, adding to the total of more than 500,000 since the Russia-regime offensive to overrun the greater Idlib area began in late April.

The offensive has killed more than 1,100 civilians and wounded thousands. Russia and the regime seized part of southern Idlib and almost all of northern Hama Province by early September. Russian President Vladimir Putin then declared a “pause”, but the bombing was renewed in November.

The greater Idlib area is home to about 3 million people — 20% of the remaining population of Syria — according to the UN.

Local sources spoke with EA on Friday about the escalation in the crisis from the attacks and Russia’s veto of a UN Security Council resolution to continue cross-border aid. They explained that fleeing civilians are being targeted by shelling and machine gun fire.

A prominent aid worker, “Ahmad”, explained, “We were supporting more than 60,000 people in about 45 camps and villages in Ma’arat al-Nu’man and surrounding areas.”

He said that, with the short-lived Russian pause, displacements had dropped last month to about 70,000, half of them from Idlib.

But Ahmad said the Russia-regime attacks have resurged to accompany a harsh winter, compounding the misery of civilians who are trapped in Idlib amid Turkey’s closure of its border from 2016. While heavy rains temporarily halted the bombing at the start of December, the assault had taken on a new intensity this week.

More than 120,000 people have fled the Ma’arat al-Num’an area to the north this month. Local aid agencies are providing transportation and workers to move children, elderly, sick and injured, and are providing drinkable water, food, and shelter to new arrivals in overcrowded crowds.

But the agencies have been unable to carry out evacuations since Monday. Convoys are being targeted by shelling and machine gun fire, especially on the M5 motorway, with “many people killed”.

Finally, during the night a heavy fog permitted an evacuation, although it was “still very dangerous with the chance of accidents from no lights.

Ahmed tells EA, “Some women told our field team that they prefer to be killed by accidents and not have one of their children killed or injured by bombs.”

One of the evacuations has been of a project for displaced children, Kids Paradise.

“Mariam” told EA of the latest movement of the children and relatives on Saturday: “35 families were evacuated over night. A few other small organizations started evacuation operations.”

The work of the local aid agencies has become even more vital — and threatened — by the Russian veto. Moscow refused not only the addition of a fifth crossing, in a resolution by three other members supported by a majority on the Security Council, but the maintenance of the existing four crossings.

Two of the crossings are from Turkey and one each from Jordan and Iraq. Russia insists that the total should be reduced to two.

The veto was Russia’s 14th since the Syrian conflict began in March 2011, blocking resolutions to limit violence and to protect and assist civilians.

We [will] see an immediate end of aid supporting millions of civilians.

That would cause a rapid increase in hunger and disease, resulting in death, suffering and further displacement — including across borders — for a vulnerable population who have already suffered unspeakable tragedy as a result of almost nine years of conflict.

Russia’s Ambassador Vassily Nebenzia responded on Friday, “Do not attempt to shift blame for this on us.”