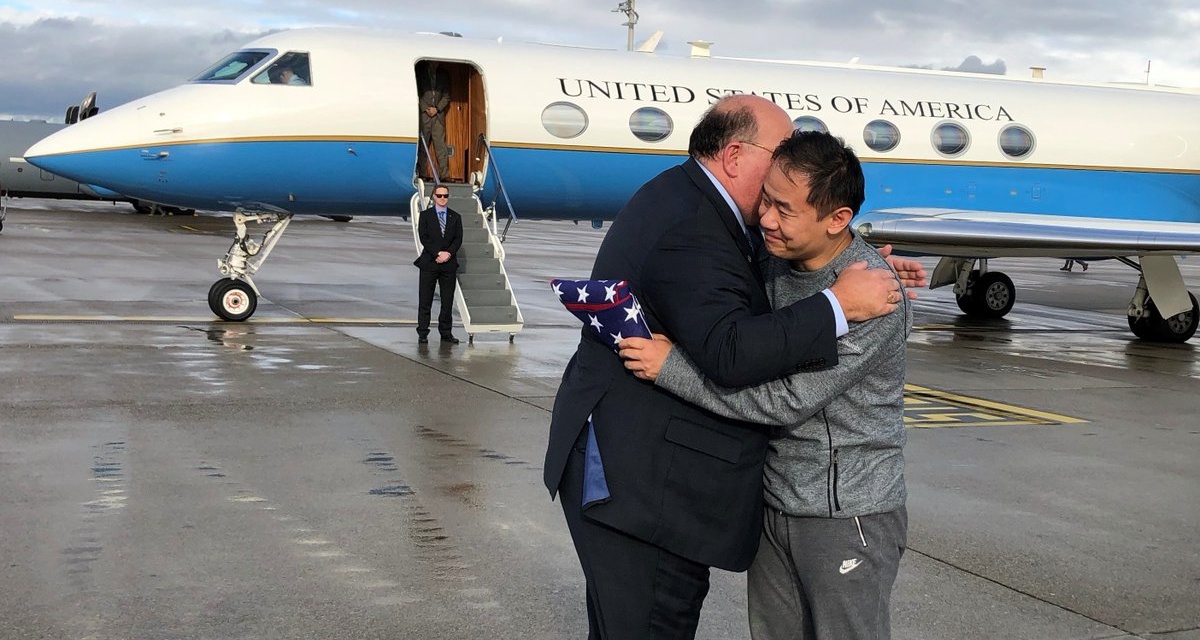 Xiyue Wang is greeted by an official after his release from 3 years in an Iranian prison, Zurich, Switzerland, December 7, 2019

American historian Xiyue Wang, held by Iran as a political prisoner since 2016, was freed on Saturday in a detainee swap with the US.

Wang, a graduate student in late 19th and early 20th century Eurasian history at Princeton University, was seized as he was gathering archival material for his doctorate. He was charged with espionage, with authorities declaring that he sought access to confidential areas of Tehran libraries, paid thousands of dollars for access, and recorded 4,500 pages of digital documents.

The historian, who is married with a young child, was sentenced in July 2017 to ten years in prison.

He was swapped for Masoud Soleimani, an Iranian scientist arrested at a Chicago airport last year and convicted on charges of violating US sanctions by seeking to transfer growth hormones to Iran without a license.. US officials said Soleimani, due to appear in an Atlanta court next week, was expected to be released from prison as early as next month under a plea agreement.

The Swiss Embassy, which represents American interests in Iran, was the broker for the exchange. Wang was met in Zurich by Brian Hook, the State Department’s special representative for Iran.

The Islamic Republic, under economic pressure from US sanctions and suppressing mass protests last month, portrayed the swap as a diplomatic victory. Some Iranian State media said Wang was released in a show of “diplomatic clemency, but other outlets did not name him in their reports.

In September, Zarif told the US outlet National Public Radio:

The Chinese American in Iran is in jail on a charge on a court case. And I have offered to exchange them, because as Foreign Minister I cannot go to our court and simply tell them, ‘Release this man.”

I can go to the court and tell them, “I can exchange this man for an Iranian”, and then have a standing, have a legal standing in the court.

“Senior American officials” said the exchange portended no easing of the comprehensive sanctions imposed in November 2018 and tightened this spring and summer. They foresaw no wider dialogue with Iran.

Hook maintained the tough line of “maximum pressure”, denouncing “the atrocities the Iranian regime has committed against its own people”.

But Donald Trump, who has been seeking a personal meeting with Iranian President Hassan Rouhani, used the swap to flatter Tehran and envisage discussions: “Thank you to Iran on a very fair negotiation. See, we can make a deal together!”

Trump, who is expected to seize political advantage by hosting Wang at the White House, went as far as to imply that the Iranian scientist Soleimani had been held outside the US legal process. This was a “one-on-one hostage swap”, Trump said.

Iran continues to hold other foreign and dual nationals, seized by the Revolutionary Guards and intelligence services even after the 2015 nuclear deal between the Islamic Republic and the 5+1 Powers (US, UK, Germany, Russia, China, and France). They include:

Iranian State media gave minimal attention to the wider political situation, saying only at the end of reports: “It remains unclear whether this exchange will have a wider effect on Iran-US relations.”