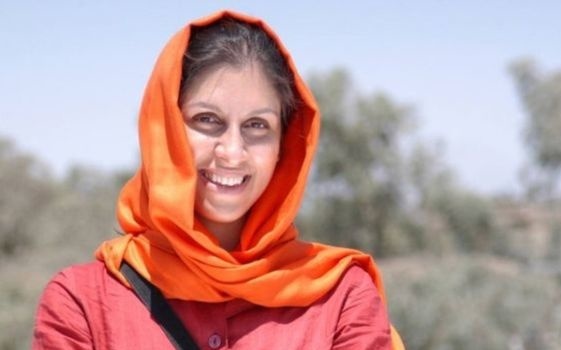 Anglo-Iranian political prisoner Nazanin Zaghari-Ratcliffe (pictured) is being held in isolation in a mental health ward in Iran’s capital Tehran.

Her husband Richard Ratcliffe said she is being kept by Revolutionary Guards, who are blocking any access to the mental ward of Imam Khomeini Hospital. Zaghari-Ratcliffe’s father tried to visit but was repeatedly turned away. He was also prevented from calling his daughter, Ratcliffe said.

Zaghari-Ratcliffe’s relatives said on Wednesday that it is “unusual for political prisoners to be guarded by the Iranian Revolutionary Guard Corps, rather than regular prison guards during hospital treatment”.

Campaigners relayed the charity worker’s statement just before she was transferred from Tehran’s Evin Prison, where she has been detained since April 2016.

I was healthy and happy when I came to Iran to see my parents. Three and a bit years later and I am admitted to a mental health clinic.

Look at me now, I ended up in an asylum. It should be an embarrassment. Prison is getting harder and harder for me. I hate being played in the middle of a political game. I just hate it.

Richard Ratcliffe said in a BBC interview that he had been “euphoric” at first, believing his wife would finally get necessary treatment. However, he had become worried by the restrictions on access and the control of the Revolutionary Guards: “Are they isolating her again to squeeze her?”

He said that it was “unnerving” not knowing what was happening and that he had asked UK Embassy officials to visit her as soon as possible.

“We Don’t Know What is Going On”

Zaghari-Ratcliffe, a project manager with the Thomson Reuters Foundation, was arrested at Tehran’s Imam Khomeini Airport after she and her infant daughter Gabriella had visited family. The charity worker was immediately imprisoned, and Gabriella’s passport was seized — she is still with her grandmother in the Iranian capital.

Zaghari-Ratcliffe was sentenced to five years in prison on “espionage”. No substantial evidence was ever publicly presented in the case, but subsequent State TV “documentaries” tied the prosecution to her employment for BBC Media Action in 2009-2010.

The BBC project trains journalists overseas. However, the Iranian regime, which has long pressed the BBC Persian Service by harassing and threatening its staff and their relatives, converted Zaghari-Ratcliffe’s administrative post into one to pursue “regime change”. It insisted she had developed reporters to seek the overthrow of the Islamic Republic amid mass protests over the disputed 2009 Presidential election.

In late April, Iranian Foreign Minister Mohammad Javad Zarif raised the prospect of a swap of Zaghari-Ratcliffe for Iranians held in US prisons, but he was immediately pulled back by other regime factions.

Nazanin hoped that her hunger strike would move the Iranian authorities, and it clearly has.

Hopefully, her transfer to hospital means that she is getting treatment and care, despite my distrust of just what pressures can happen behind closed doors. It is unnerving when we don’t know what is going on.