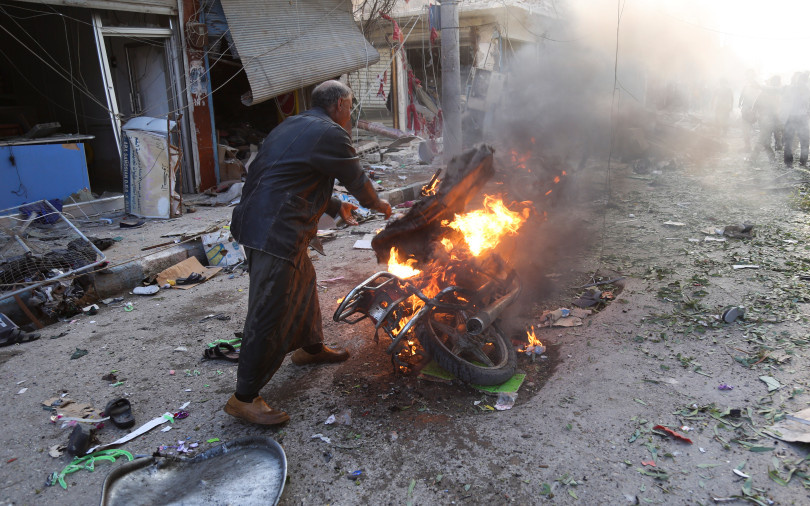 Turkey and the Kurdish-led Syrian Democratic Forces have blamed each other for a deadly car bombing in a Syrian border town captured by a Turkish-rebel offensive last month.

At least 13 people were killed and 30 wounded on Saturday when a “bomb-laden vehicle” was detonated in a market in Tel Abyad. The SDF withdrew from the town after Turkish and Russian leaders Recep Tayyip Erdoğan and Vladimir Putin declared their joint military control of the border area on October 22.

The Turkish Defense Ministry declared that the Kurdish militia YPG, which leads the SDF, was responsible. Ankara considers the militia to be part of the Turkish Kurdish insurgency PKK, which has fought Ankara’s forces for 35 years.

We condemn this inhuman attack of the bloody PKK/YPG terrorists who attacked the innocent civilians of Tel Abyad who returned to their homes and lands as a result of the Operation Peace Spring.

Foreign Minister Mevlüt Çavuşoğlu aimed at countries such as the US, which created the SDF and supported it until Donald Trump — in an October 6 call with Erdoğan — accepted the Turkish-rebel offensive and ordered a withdrawal of American troops.

Çavuşoğlu said, “The attack targeting innocent civilians in Tal Abyad should serve as a lesson to those who provide shelter to the YPG terrorist organization and justify its actions.”

Tel Abyad and Ras al-Ain are witnessing chaos and car bomb attacks since the beginning of the barbaric invasion of the Turkish army against these two areas, and this situation does not differ from that of the rest of the Syrian territories occupied by the Turkish invasion army and its mercenaries.

Gabriel claimed the bombings are trying to “force people to leave their villages and cities to bring about demographic change”.

Erdoğan has said that Turkey will establish a 480-km (270-mile) long and 30-km (19-mile) deep zone, across two Kurdish cantons and extending east across the Euphrates River to Iraq. He asserted that up to 2 million of the 3.6 million Syrian refugees in Turkey will be resettled in the area.

Despite a declared pause in attacks amid its agreement with Russia, Turkey shelled along the border on Sunday.

A member of the Free Burma Rangers, a humanitarian organization working in the mainly-Kurdish area, was killed by a mortar strike.

Today, Nov. 3, our Kachin cameraman and medic from Burma, Zau Seng, was killed today by an FSA/Turkish Army mortar strike that hit our CCP. Our Iraqi coordinator was also wounded. Thank you for your prayers during this time. https://t.co/LT1YANLbj1

SDF Mustafa Bali said the aid workers were in a car “targeted” by Turkish artillery near the town of Tel Tamer in western Hasakah Province: “They have been bravely putting their lives on the line to help wounded here.”

The American military command said its troops were near the Turkish fire: “On Nov. 3, a U.S. patrol in northeast Syria witnessed multiple artillery strikes landing within a kilometer of the road they were travelling on. The patrol was not hit.”

The statement proclaimed, “Coalition forces maintain their inherent right to self-defense to ensure the success of our operations while prioritizing the safety of our troops.”

Pushing back on Trump’s order, the Pentagon has ensured that hundreds of US troops remain in northeast Syria, on the rationale that they are protecting Kurdish-held oilfields.